Google is preparing to launch a new smart display with a 10-inch display, the company’s own online store has revealed.

A post on the Google Store has outed the new Nest Hub Max, which it says delivers a larger HD screen, stereo speakers and a camera for video calls. The original Google Home Hub only offered a 7-inch LCD display with a 1024×600 resolution, so it appears the Nest Hub Max will offer a larger and better display.

It also seems like the camera missing on the original smart display will be added this time around. Judging by the post, Google is also seeking to improve upon the single ‘full range’ speaker – which wasn’t of a particularly high standard on the Home Hub – by adding stereo sound.

The name, if it proves to be the final monicker, is also interesting. The inclusion of Google’s Nest company suggests the display will be more focused on smart home controls than the original. It’s possible Google is making some software tweaks to put smart home gadgets front and centre.

One thing’s for sure though, we weren’t supposed to know about this device just yet, because the reference has now been removed from the relevant page on the Google Store (via 9to5Google). 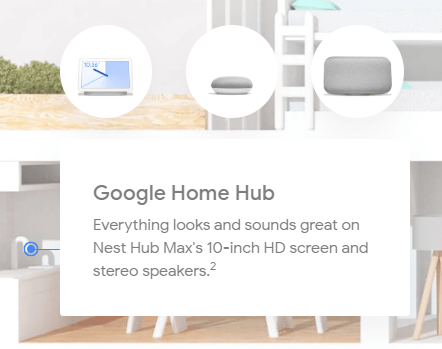 It’s possible Google was (and still is) planning to reveal this device at the Google I/O keynote next month, where its smart home efforts are often detailed.

The original Google Home Hub earned a 4.5/5 star score from Trusted Reviews when it arrived last year. We praised the dedicated smart home controls, integrated YouTube app and the ability to easily converse with the Google Assistant. However, the lack of a webcam for video calls proved an annoyance, as did the lack of support for a Netflix app.

Does the as-yet-unannounced Nest Hub Max sound like the smart display for you? Or are you in-favour of a device that doesn’t place a camera in your living room? Let us know @TrustedReviews on Twitter.