Images have surfaced of a previously unknown Sony smartphone which features a triple rear camera. Here’s all we know so far about the next Xperia device.

An image was posted by Chinese blogger Zackbuks, who claims that the device is called either the Xperia 1s or Xperia 1v, and that it will be announced in Tokyo on July 9. The design looks quite similar to the Xperia 1 except for the fact that the camera module is on the left-hand side of the handset, rather than centred. 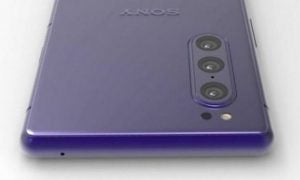 We reviewed the Sony Xperia 1 camera recently, in a direct comparison to the Google Pixel 3. The Eye AutoFocus mode helps you take good portrait shots, and the three lenses offer a versatile shooting experience. We had some criticisms too: the low-light mode nowhere near as good as the Pixel, generally the colours are warmer, and it cannot pick out as much detail as the best in its class. Our verdict is that the Xperia 1 is a good all-round camera with plenty of potential.

This latest news from GSMArena comes after persistent rumours that the Samsung Galaxy Note 10 will also have a right-hand orientated vertically-aligned camera unit, contrary to previous phones in the series. Like the Xperia 1v or 1s, it will also have three rear lenses. With Huawei struggling to stay afloat after bans from Android and ARM, perhaps Sony sees this as a chance to re-establish itself as a leading camera phone manufacturer.

The other recent trend in smartphone camera design is for a square module housing the sensors, which it seems will be taken up by both the iPhone 11 (according to rumour) and the Google Pixel 3 (officially confirmed). This has proved to be controversial, with some lamenting the blocky style replacing a more smooth and streamlined effect.