A new leak has revealed renders of a brand-new premium Motorola device, and it looks very similar to the Samsung Galaxy Note in one key respect.

Well-known Twitter tipster Evan Blass published an image of the upcoming Motorola device (below), and not only does it have a cut-out selfie camera but it’s also set to boast a stylus similar to the one found on the Samsung Galaxy Note 10.

Blass claims that such a feature has been absent from Motorola’s line-up “since the Windows Mobile era”, but cautions against using the device’s rumoured name, the Motorola Edge Plus, for the time being. 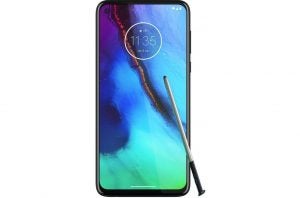 Apart from the design, we know relatively little about the new device at this point, but if it’s going to compete with the Samsung Galaxy Note 10 in more than looks alone then it will have its work cut out. Samsung’s phablet is a real powerhouse of a device with a versatile camera array and a gorgeous screen. But there are a couple of areas where it could improve; we’d have liked to have seen improved battery life, plus expandable storage.

Motorola tends not to aim at the high-spec, high-cost segment of the market with its devices, instead of releasing competitively priced mid-range and budget smartphones that achieve considerable success in their own right. Three of the nine phones in our Best Budget Phones list are from this brand, including the all-rounder Moto G7 Plus, the battery champion Moto G7 Power, and the ultra-cheap Moto E6 Plus. But the recent release of the Motorola Razr, priced at $1500 (~£1145), perhaps is a sign that Motorola is ready to join the likes of Samsung and Apple in the premium smartphone market. But it remains to be seen whether the brand can beat the Galaxy Note at its own game.