Motorola has just resurrected its nostalgic flip phone — but how does it differ from Samsung’s foldable flagship? Here’s how the specs and design compare.

The Samsung Galaxy Fold was the first mainstream smartphone with a foldable display (the less said about the Royole Flexpai the better). But now there’s a new boy on the block, with a distinctly retro appeal: the Motorola Razr, which recalls the iconic flip phone form factor of the past. So what’s the best option for your first foldable phone? Here’s our full head-to-head breakdown.

The Samsung Galaxy Fold has an appearance similar to a book, which opens out with a vertical fold to reveal the fully expanded screen previously hidden on the inside. The “front cover” also has a small screen to deal quickly with notifications if you’d rather not open it out to its full extent. 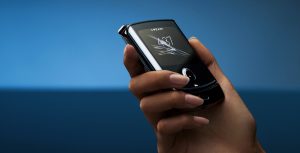 The Motorola Razr’s design is the key aspect that’s garnered headlines, as it’s got the appearance of the much-loved Razr phones from the mid-noughties. But rather than a screen on the top half and a keypad on the bottom, this heir to a hallowed heritage is all screen when it’s opened up (save for a relatively chunky bottom bezel and a slim notch at the top). It also has a secondary smaller outer screen when the clamshell is clammed up, for using basic notifications, but this version is more pleasing than the Fold’s as there’s less wasted space.

The Samsung Galaxy Fold’s inner screen measures 7.3-inches, and has a resolution of 1536 x 2152 pixels. We found when we went hands-on with the device that there’s a noticeable crease down the middle between the two halves; we’ve yet to discover if the Razr has the same flaw, but it is likely to given the similar folding design. Moreover, the Galaxy Fold’s interrupted by a fairly large notch for a selfie camera, inset at the top right hand side of the display, which somewhat undercuts the appeal of the large screen. The outer screen is far smaller, measuring just 4.6-inches, and with a resolution of 720 x 1680. 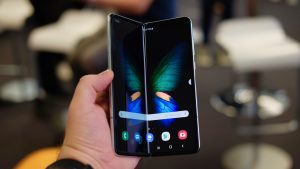 The Motorola Razr also has the same double-display quirk as the Galaxy Fold. The outer screen is even smaller, measuring just 2.7 inches at a resolution of 600 x 800 pixels, while the larger screen measures 6.2 inches when unfurled, and has a resolution of 876 x 2142. The large screen has a small notch with speaker and selfie camera at the top, and then a fairly thick chin at the bottom of the screen. The different format means that the Razr has a long and narrow aspect ratio, while the Galaxy Fold’s is closer to being a square. 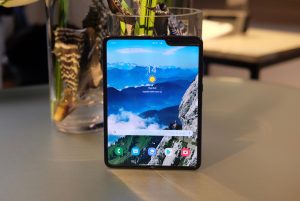 The Motorola Razr however, has just two camera sensors. The main snapper can still perform the function of a rear- and front-facing camera though, because it’s housed on the top of the outer casing. When the phone is snapped shut you can point it towards your face as a selfie camera, and when it’s unfolded you can use it as your regular camera. There’s another dedicated selfie cam on the top of the unfolded screen.

As we haven’t seen the photography results of the two phones yet it’s impossible to pick the winner. Based on past smartphone performance we’d expect Samsung to outperform Motorola, but we need the evidence before delivering a verdict. In terms of versatility alone, Samsung certainly has the advantage.

The Samsung Galaxy Fold boasts the flagship Snapdragon 855 processor, one of the fastest on the market. It’s the same chip that powers flagships such as the OnePlus 7 Pro and the Sony Xperia 1. It pairs this with 12GB RAM and 512GB storage, along with a mammoth 4380mAh battery. What’s more, it also supports 5G connectivity.

By contrast, the Motorola Razr runs on a less-powerful mid-range processor from Qualcomm, the Snapdragon 710, has 6GB of RAM with 128GB of storage, and a mere 2510mAh battery.