Motorola plans to introduce a Samsung DeX-like desktop mode to the Moto G line with its Android 11 update.

Motorola hinted at the feature in a video made to demonstrate a few of the 800-series experiences coming to the company’s Mid-range Moto G phones. Qualcomm unveiled the latest chipset in the series, the Snapdragon 888, earlier this week.

In the video, Motorola shows the desktop mode being used to check off a to-do list, screenshot images and email them to others, all without having to minimise any of the windows. 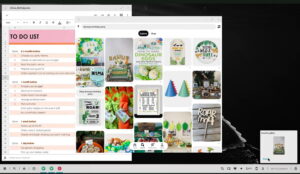 “Take multitasking to the next level in a desktop mode, allowing you to take a closer look at things like videos, artwork and documents on a larger display”, said Motorola in the video (via PCMag).

The feature looks similar to the Android desktop mode and Samsung’s DeX mode, essentially allowing users to navigate their phones on a more spacious display.

The Motorola desktop mode also appears to include a taskbar with buttons for the app launcher, search, home, screenshot, network, sound and more and may require a wired connection (via XDA Developers).

According to XDA Developers, Motorola is also working on a level of integration between PC and phone with a new app called “Mobile desktop”. The app will allow users to connect the two devices with USB or Wi-Fi to share files and possibly launch apps and mirror notifications.

Other features arriving with Android 11 include a mode that allows users to use the phone’s ultra-wide lens to fit family into video calls, a console-like gaming experience and a built-in media launcher compatible with any TV.

“We are very excited with our new platform, as it reinforces our vision to bring experiences and capabilities that maximise the power of our smartphones and more. 2021 will mark the 10th generation of Moto G and nothing would make us prouder than bringing 800-series experience to this family”, said Motorola Mobility president Sergio Bunac.

Motorola has yet to confirm whether future Moto G phones will pack the 888 chipset, or if it will stick with a cheaper SoC with the addition of 800-series level experiences. Upgrading to the 800-series could potentially increase the price of the currently very affordable phone.

We’ll have to wait for more news from Motorola.