Has Motorola once again made the finest budget phone around?

Motorola and its parent company Lenovo have been churning out fantastic budget smartphones for years now, with the original 2013 Moto G proving you didn’t need to pay top dollar to get a great experience.

Last year’s Moto G6 once again shone brightly as our favourite budget smartphone, even though the emergence of budget-focussed Chinese brands like Xiaomi have made the market tougher to dominate.

So, how has Motorola improved on its G-series this time? Let’s have a look and see what’s new with the Moto G7 (read our Moto G7 review).

Moto G7 vs Moto G6 design – What do they look like?

Sitting comfortably at the budget end of the market, the Moto G phones have never competed with the top-tier flagships in terms in design. They tended to be fairly blocky, bulky plastic phones with a focus on durability.

This approach changed slightly with the Moto G6. Instead of rubbery plastic, the phone was constructed with glass on both the front and back, giving it a much nicer feel. That has continued with the Moto G7 and from the back, it looks very similar. One obvious difference with the G7 is the fingerprint sensor now resides inside the Moto logo on the rear, rather than under the display on the bottom. 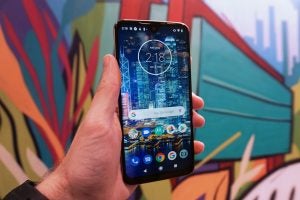 On the front is where the clear differences lie. The Moto G6 was released just as the 18:9 aspect ratio display trend began, whereas the Moto G7 comes just as we’ve reached peak notch. Instead of a wide notch like the iPhone XS, the G7 sports what’s affectionately known as a ‘dewdrop’ notch – meaning it doesn’t take up anywhere near as much room. This notch houses an 8-megapixel front camera (the same as the Moto G6).

Having that notch allows the display to be larger (6.2-inches as opposed to 5.7) without the phone being too much bigger. The Moto G7 is roughly 4mm taller than the G6 and marginally wider and thicker; it’s a big phone, but should feel ok if you’re already used to larger phones or are switching from the Moto G6. 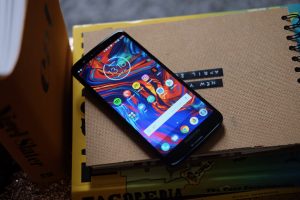 Moto G7 vs Moto G6 specs and features – How are the performance improvements?

This is a healthy improvement over the G6, which packed 3GB RAM and 32GB storage (although there was a larger 64GB option available with some retailers too).

Battery capacity remains the same across both phones at 3000mAh and charging speeds are the same too at 15w. It would have been nice to a bit of bump to the cell and it’s one of our bigger disappointments with the G7.

Another very similar aspect looks to be the camera, however, we can’t be sure whether Moto has altered some of the underpinning tech here until we’ve properly reviewed and compared the new model. Both the G6 and G7 have main 12-megapixels sensors, with an f/1.8 aperture and 1.25μm pixels. It does now shoot 4K video though, which is a nice upgrade over the 1080p limit on the G6. 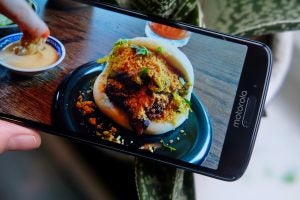 Alongside the main camera, there’s a 5-megapixel depth-sensor for aiding the blurry background effect in the portrait mode. Both the G6 and G7 have this and it’s not immediately obvious whether or not anything has been changed or improved for the new model.

Android 9 Pie comes as standard on the G7, whereas the G6 shipped with, and seemingly still runs Android 8.

Moto G7 vs Moto G6 early verdict – Is the upgrade worth considering?

The Moto G7 feels like a minor upgrade in many ways. Yes, there’s been a bump to the RAM and an updated chipset but everything feels very familiar. Of course, this could all change once we’ve spent a good amount of time with the Moto G7.