Microsoft has begun sending out a new survey (via Reddit) to select consumers regarding its current selection of controllers, and some of the questions raise more than a few eyebrows.

The controller that shipped with the Xbox Series X and Xbox Series S is a subtle improvement over the previous generation, introducing new features such as a dedicated share button, a more accurate d-pad and a textured grip across the back.

Compared to the PS5’s Dualsense, it feels like a very conservative effort from Microsoft, with some players likely expecting more from the next generation machine. Now, a new survey has seemingly addressed some of these opinions expressed by players since launch.

Sent out via email, one question in the survey asks the following: “I am aware of features on PlayStation controllers that I wish were on the controller that came with this console.” In essence, Microsoft is asking if it should implement similar features into the Xbox line of peripherals moving forward. 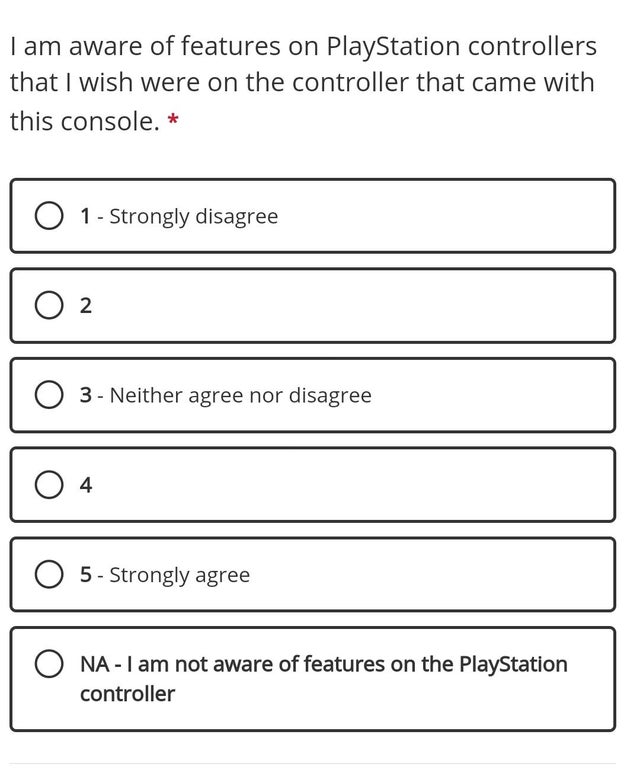 While the survey doesn’t confirm any form of new controller or potential update, it shows that Microsoft is considering such developments, and is aware of the impact Sony’s DualSense has had on the gaming world.

It’s a wonderful controller, and feels like a true generational leap in games like Astro’s Playroom and Bugsnax. Having something similar on Xbox would be no bad thing. As for the controller itself, here’s what I thought in my 4.5/5 review: “It’s rare that the most enthralling aspect of a new console is its controller, but that’s exactly the case with PS5 and the DualSense. It’s a stunning peripheral, and one which introduces features we’ve simply never seen executed like this before.”

“Adaptive triggers and haptic feedback introduce a newfound level of immersion, and while I’ve only seen it in a few games, it has the potential to be something really special. One of the only downsides is the white colour scheme, which is simply begging to be adorned with all sorts of irritating marks.”