Microsoft's new Surface Pro 6 convertible laptop-tablet hybrid and the more traditional Surface Laptop 2, have arrived. We dive into the specs of each and figure out which of these Surface machines might be best for your needs.

The Microsoft Surface Pro 6 and Surface Laptop 2 are out now and they’re both excellent buys, scoring an impressive 8/10 each. But which one is the best for you?

So how do they differ, and which one should you buy? 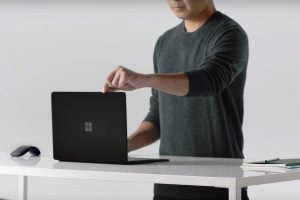 One of the major differences between these devices is, of course, their designs. The Surface Pro 6 offers flexibility and seriously impressive portability, with the ability to function in tablet or laptop modes. One disadvantage of that is you’ll need to stump up more cash if you actually want a keyboard – that Type Cover doesn’t come bundled.

The Surface Laptop 2, as its name suggests, comes with a keyboard attached, although you can’t snap this off when convenient. In both cases, the keyboards features soft-touch alcantara finish and backlit keycaps. The Surface Laptop 2 is impressively slim and light, weighing just 1.25kg in its base form. However, the Pro 6 is even more portable, starting at just 770g. That doesn’t include the Type Cover, but this accessory only adds a little extra weight.

The Surface Pro 6, like others before it in the Surface range, is a convertible device that can comfortably double as a Windows 10 tablet or laptop. The Type Cover kickstand is sold separately, but when equipped it means you’ve got a very portable device that’ll handle basic office work and sit nicely on your coffee table or train seat for when you want to burn through Netflix at the end of the day.

That’s not to say that the Surface Laptop 2 is a brick, though. Weighing only a few hundred grams more than the Surface Pro 6, this too is a lightweight, luggable laptop that’s sold as much on its looks as its overall performance.

In terms of ports, it’s actually the smaller, lighter Surface Pro 6 that wins here, but be warned, neither of them are particularly generous in terms of physical connections. If you want a lightweight premium laptop that’s got more ports than you can shake a stick at, you might want to check out the LG Gram, instead – but that’s another story.

In terms of ports, the Surface Pro 6 gives you one Type-A USB 3.0 port, a Mini DisplayPort, a micro SD card reader, as well as a standard 3.5mm headphone jack.

The Surface Laptop 2 has all of the above, with the exception of a card reader, which is baffling, because it’s bigger – you’d have thought that Microsoft could have found a way to engineer at least a microSD slot on here, if not a full-blown SD card reader.

Both laptops draw mains power via a proprietary Surface Connect port. The mains adapter you get in the box actually features another USB-A port, meaning if you’ve got the right cable, you could keep your phone charged up without having to sacrifice either device’s main USB port. Still, it’d be better if there was at least one USB-C port here, for your charging and data needs.

One of the biggest upgrades for this year’s new Surface Pro 6 and Laptop 2 compared to last year’s models, is new Intel chipsets stashed inside. The old Kaby Lake platforms are gone, replaced by Kaby Lake Refresh 8th-Gen Core i5 and Core i7 processors.

In terms of how both the Surface Pro 6 and Surface Laptop 2 compare, here are all of their key specs, side-by-side:

So far we’ve only tested the Core i5 versions of the Surface Pro 6 and Surface Laptop 2, both with 8GB of RAM and a 256GB SSD. It’s therefore unsurprising to learn that there’s not a great degree of variation in terms of benchmark results – although as you can see the Surface Pro 6 is slightly ahead.

We’ll update this table once we’ve tested out the Core i7 variations.

Geekbench tests focus on overall CPU performance. Anything with a single core score over 4000 is good, multi-core scores above 8000 are considered decent. These scores indicate that both the Core i5 Surface Pro 6 and Surface Laptop 2 are capable enough of handling everyday computing tasks, and that bore out in our real-world testing too.

As well as measuring processor speeds, disk read and write speeds give you a better idea of how quickly it’ll take a system to load files and launch apps, programs and games. These scores are about average for laptops and convertibles in this price range.

The Cinebench benchmark is a GPU stress test, and is useful for providing an at-a-glance look at how well suited a laptop is at playing games or rendering video. These scores are fairly typical of a system with an integrated graphics unit like the Intel UHD Graphics 620.

The MacBook Pro 2018 we tested featured an integrated Intel Iris 655 GPU, and gave us an Open GL score of 38.51fps and a Cinebench score of 594. That said, the more powerful Dell XPS 15 2-in-1 (9575), with its G Series CPU, fusing Intel Kaby Lake architecture with an AMD Vega GPU, gave us OpenGL and Cinebench scores of 86.99fps and 705 cb – indicating that it’s better for gaming and video work. 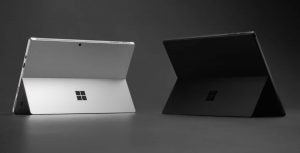 In terms of prices, both the Surface Pro 6 and Surface Laptop 2 occupy similar price points. Expect to pay the better half of a grand for the cheapest option, and north of £2000 for the higher end versions.

You should also note that Microsoft’s Type Cover keyboard docks don’t come included with the Surface Pro 6. Type Cover docks typically start at £100 a pop, so in most cases, the Surface Pro 6 and Surface Laptop 2s are more or less the same in price, assuming that you’re in the market for a device to get some work done on. Let’s face it, if you want to do any typing on the Surface Pro 6, you’re going to want to buy a Type Cover.

That said, Microsoft often bundles Surface Pros with keyboard docks during promotional periods like Black Friday, Amazon Prime Day, and Back to School sales on its site. As well as this, Microsoft also regularly slashes the standard RRP of its Surface devices. We’ve listed the standard non-offer prices below. Chances are, you’ll be able to pick up one of these for less from the likes of Amazon, Argos, John Lewis, or Currys PC World.

Overall, the Surface Pro 6 appears to the better value buy – it’s cheaper, comes with a micro SD card slot and in terms of performance, it’s slightly better (the Core i5 version is, at least).

Then again, which the Type Cover keyboard dock offers a decent typing experience, some people will just prefer the extra space and solidity that you get with an integrated QWERTY keyboard. Their similarity in terms of performance means that your choice mainly comes down to whether you like the idea of having a lightweight convertible, or a more traditional laptop.

If you’re not bothered about the difference in form, then you should probably save a bit of money and pick up a Surface Pro 6.