Skype is going to fill the world with chat bots who will act on your every command. Let’s hope they’re not quite as outspoken as Tay.

Demonstrated at Microsoft’s Build 2016 conference, new chat bots will work with Cortana inside Skype to let you book hotels, order food and manage your calendar.

There’s some pretty big stuff at play here. The Microsoft-owned service has launched a suite of tools to allow businesses to chat with you directly with AI-powered customer service agents to fulfill most simple tasks. It’s called Microsoft Bot Framework.

Related: Windows 10 Anniversary Update – everything you need to know

For example, if you tell Cortana (via Skype) that you’re going to an event, it might reach out to a hotel that’s local to that event and ask you whether you want to talk to that hotel’s chat bot. If you say yes, the bot will be added to your own Skype conversation and go through the process of booking a hotel room. This can be done with both text-based commands and buttons built right into Skype. You can even invite bots to another conversation so you can make plans with Cortana, businesses and your friends simultaneously.

From a developer side (which is absolutely crucial if this thing is going to have legs), Microsoft is giving them access to the Bot Framework and a group of services called ‘cognitive micro services’. In essence, the developer takes Microsoft’s natural language technology (that understands more informal turns of phrase and understands context) and builds it into their own system. Domino’s, for example, can set up their chat bot to understand ‘grab me a big pizza with peperoni [sic] & dbl cheese, to my crib’ to something like ‘Large pizza, double cheese, pepperoni to [customer address on file]‘ or something similar.

If you’re completely incomprehensible, the Chat Bot can apologise and hand you over to a human assistant. 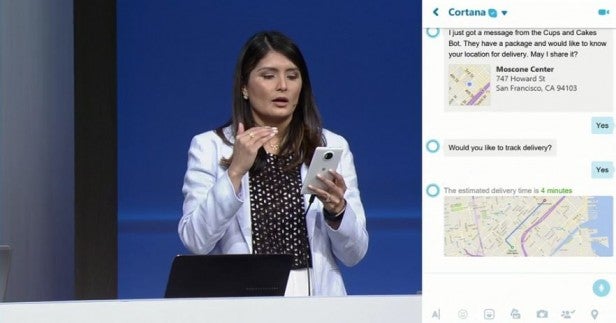 These bots could also work with other chat applications such as Slack and even via email, too.

There are other contextual actions that can take place outside of Skype. Just Eat, for example, could trigger a takeaway order when it recognises a certain situation is unfolding. For example, you’re working late and want some greasy food at the office, or you’re about to go into a very long meeting that might require a bit of livening up at some point. Based on data provided by Cortana, it will be able to work out when you’re most likely to want its services. While this isn’t linked to Chat Bots directly, it’s still a fairly big hint on where Microsoft sees Cortana going. 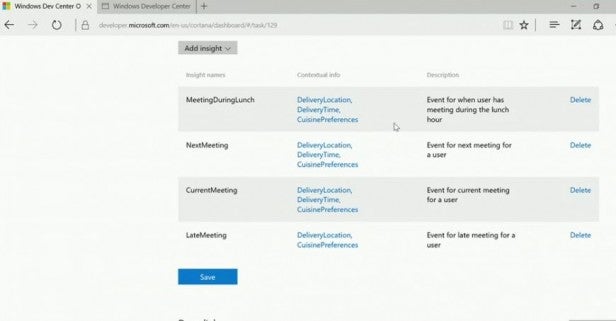 Microsoft has several hurdles to overcome here with Chat Bots. First, it has to re-establish dominance in the chat space, which it has never quite managed to do with Skype. Then it’ll have to encourage big businesses to build their own bots. Finally, it’ll have to make people move away from their other email services, such as Gmail, so customers have a completely cohesive system through which they run their lives. They have an advantage, of course, since they can send some firm prods in a users’ general direction thanks to their 270million-strong network of Windows 10 devices.

The other problem? Isn’t it possible that Microsoft might just be launching the first phase of some fairly spammy looking personal advertisement service? Of course, Microsoft has pre-empted that by very clearly stating that privacy is a priority and that Cortana won’t overstep its boundaries, but it still represents a bit of a shift for a company already starting to attract attention for its advertising and privacy tools.

At Trusted, we’re just looking forward to having Microsoft Bot face-offs. Tay versus Domino’s, anybody?