HoloLens 2 is not a toy. Microsoft made this clear during its big announcement at MWC 2019, devoting much of its speech to exploring the various industrial applications for the new mixed reality headset.

That didn’t stop Microsoft from showing off an animated hummingbird and have it follow HoloLens developer Julia Schwarz around the stage, though.

While Poké-fans are tripping over each other’s Pokéballs to be the first to play Sword and Shield, Pokémon Go is still going strong (a few members of staff in Trusted Reviews towers still regularly play it) and the HoloLens 2 is perfectly adept at projecting technicolour animals in front of your eyes. The temptation for Microsoft to dive into mixed reality gaming with HoloLens must be huge.

Or at least, you’d be forgiven for thinking so – Greg Sullivan, director of communications for Microsoft told Trusted when we swung by Microsoft’s stand for a HoloLens 2 demo, that a HoloLens gaming edition (HaloLens?) won’t be announced tomorrow, next week, or anytime soon.

Related: Halo Infinite: Everything we know about the sci-fi shooter 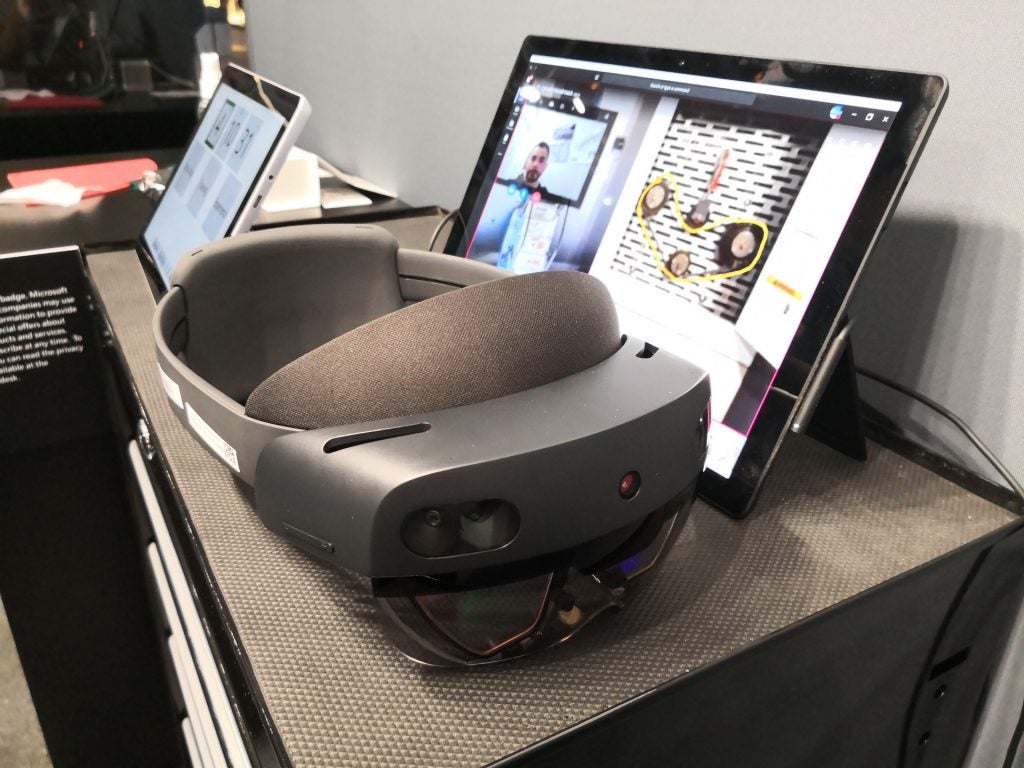 “We’ve been pretty clear about the target audience,” Sullivan said. “What I can tell you is the HoloLens 2 is a commercial device, but the vision that we have for mixed reality in general, goes beyond commercial scenarios.

“The impact it’s having on computing is writ large. We think that, to some degree, mixed reality is the future of computing and that will, as many technologies have, start in the commercial space. HoloLens 2 is a commercial device, but we think that some future installment – and we’re measuring this in terms of years not months – we do think that there is, over the long term, scope for mixed reality in the consumer space.”

Sullivan wouldn’t be drawn any further on the gaming aspect when questioned further, other than to reiterate what was said above – Microsoft has some ideas around this, but at the moment, they’re just ideas. Don’t expect one to drop this (or next) Christmas, though.

That said, HoloLens 2, is a lot of fun. The eye-tracking calibration process you go through at the start takes about 20 seconds, and requires you to track a rotating gem (which looked like the Bit sprite from the original Tron movie) around the HoloLens 2’s field of vision, so that the system had a better idea of where to arrange menus within that field. Even though that’s just the set-up process, it was still quite cool eyeballing this little twisting and turning gemstone.

A quick recap – one of the key things the HoloLens 2 changes from the previous version is expanding that field of vision from the 35-degree vane, which the first gen HoloLens projected in front of people, so more holograms can be dangled in front of your peepers. The quadrilateral field has increased to 52 degrees corner to corner, and changing from an aspect ratio of 16:9 to 3:2. 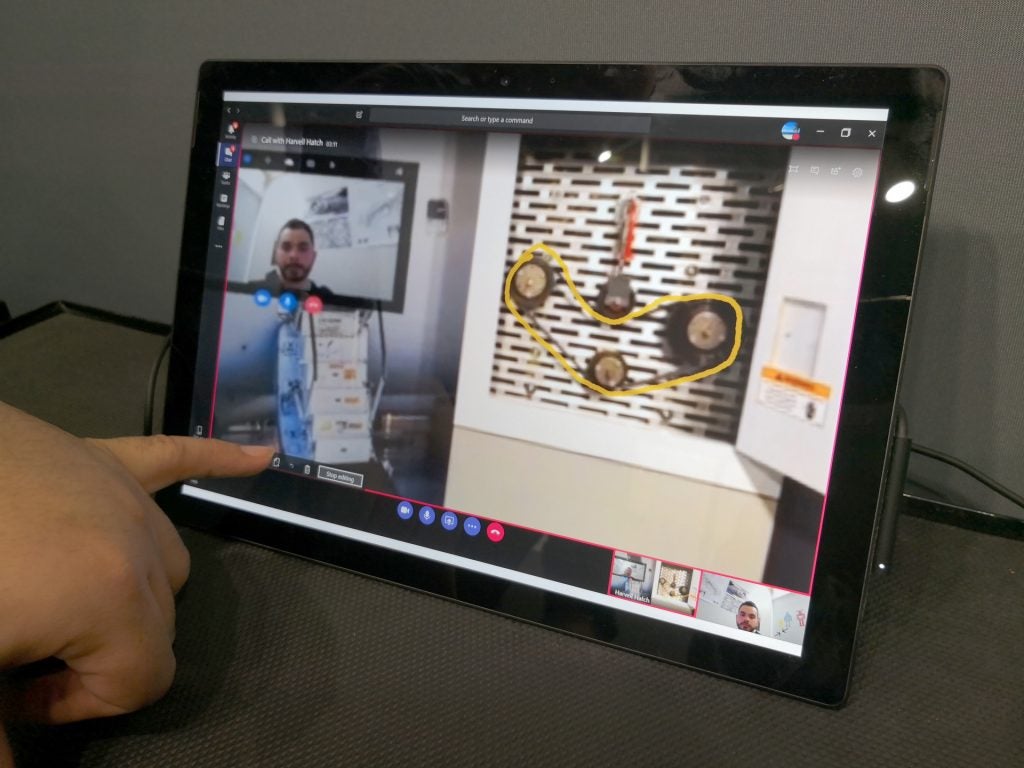 HoloLens 2 is also apparently more comfortable, and has been designed to fit a wider range of heads. Slipping the HoloLens 2 on is very easy. The device isn’t as heavy as it looks, and, unlike some mixed/virtual reality gear, you’re able to pop the HoloLens 2 on if you’re wearing glasses. As it’s mixed reality and not virtual, you’re fully aware of your surroundings and it doesn’t feel like half of the room is laughing at you behind your back.

Despite this, the sense of immersion is palpable, and reaching out to grab windows and drag them around in your secondary field of vision is actually oddly entertaining. It even made Microsoft Teams enjoyable.

During my HoloLens 2 demo, I got to experience Microsoft’s own Dynamics 365 Remote Assist software. Remote Assist basically does what it says on the tin – I was taken through a scenario where I had to shut down a terminal, and given step-by-step instructions on how to do this by a member of Microsoft’s demo team via a Teams video call with screensharing enabled. This meant that whoever was on the other end of the call was able to see a 720p live feed of what I was looking at through the HoloLens’s 8-megapixel camera.

Additionally, Remote Assist will let the user scrawl instructions and directions directly in to the field, so if you’re a trainee mechanic or a plumber, you could have your supervisor show you the ropes remotely by drawing or writing little arrows or instructions, either with a finger or a Surface Pen. 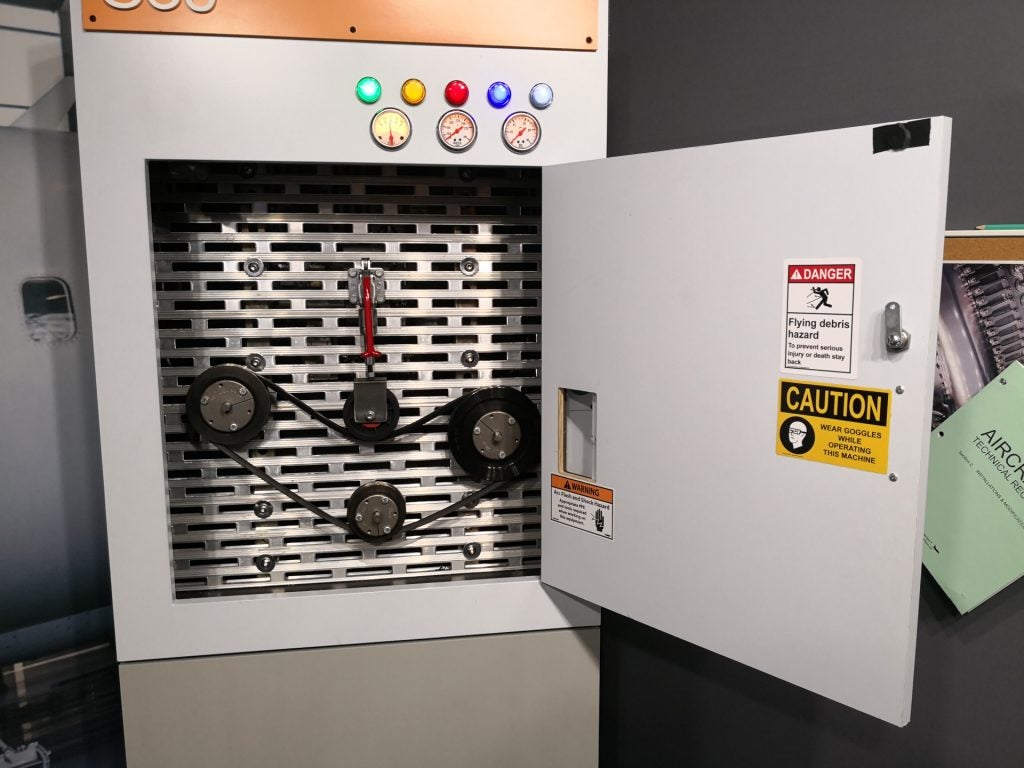 Microsoft via Remote Assist had me shut down the big M20 terminal, which we were able to do by following the path sketched out for us, before heading to the second terminal, and figuring out how to operate that by reading the schematic that Microsoft’s team dropped into the right hand side of our field of view. Matching this to what we had in front of us, it was clear that the belt inside the S30 terminal (see above) had frayed and needed replacing.

It didn’t feel entirely representative of a real-world scenario, but then again it was a five minute demo.  It felt more like an escape room-type scenario, or a Crystal Maze challenge, but with someone who wasn’t Richard Ayoade dropping hints in our ear. On that note, maybe there is an immediate market for escape room-type experiences augmented by mixed reality gear.

It being MWC 2019, where you couldn’t turn a corner without seeing the number ‘5’ right next to the letter ‘G’ in foot-high lettering on every other stand, we asked Sullivan about the future of HoloLens and 5G connectivity. Right now, all of the HoloLens’s computational work happens on the device, courtesy of a customised Qualcomm Snapdragon 850 CPU with no cellular modem – data streaming is handled over Wi-Fi.

That’s fine if you’re in the office, power plant, or architect’s office and secure Wi-Fi is abundant, but what if you’re a crop farmer ten years from now and you want to be able to see where all of your watering drones and Internet-connected harvesters are at a glance? 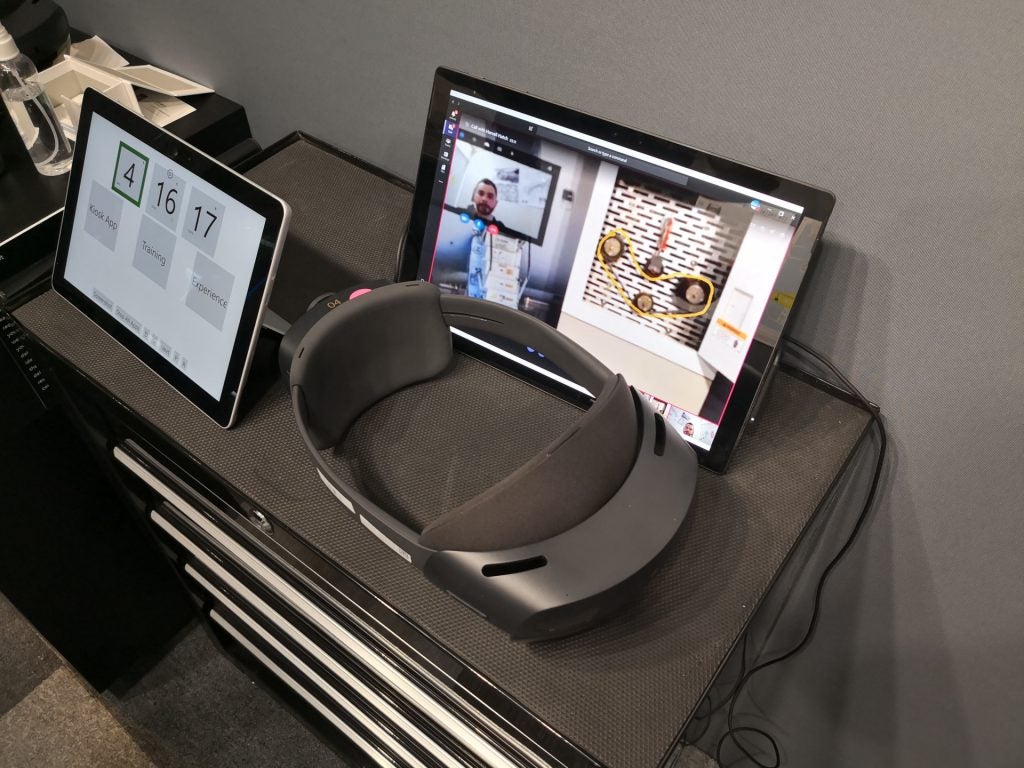 We asked if 5G would be factored into the development of the HoloLens 3, with regards not only to connectivity, but also to taking some of the computational heavy lifting off of the device itself.

“We’re positive that with the advent of 5G networking obviously, and in the near-term, HoloLens 2 will leverage that bandwidth and low latency over tethered Wi-Fi,” Sullivan said.

“LTE connectivity was in fact a request that we had from a small, a relatively small number of customers [feeding back about HoloLens 1] but it didn’t enter the priority list of future features for HoloLens 2, like expanding the field of view, increasing comfort. Had we added cellular connectivity, we would, in fact, have seen performance per Watt go down, battery life drop, our thermal footprint would have been different, so it was an extra cost, and that we didn’t have enough customers clamouring to make that cost worthwhile.”

We’ve seen demos of 5G gaming at MWC 2019, and while we have reservations about how much that might cost the end user too, it’s incredibly impressive nonetheless.

At the end of the day, cost is going to be the ultimate factor, and the HoloLens 2 already isn’t cheap – it’s currently priced at $3500 for the device or $125/month with Dynamics 365 Remote Assist bundled in.

That converts to roughly £2680 and £95/month – don’t ever complain about Xbox Live prices again.