Microsoft October 2016 Event: Today’s Microsoft keynote is finally over and we’ve been inundated with lots of big software and hardware news. Here’s what you need to know.

Microsoft has certainly busy, dropping a bunch of new software and hardware announcements on us during today’s two-hour keynote. First off, we learned that the Windows 10 Creators Update will be arriving for free next Spring, bringing with it 3D design software and new gaming-related features.

Also on the agenda was the Surface Book i7, a refreshed version of the old Surface Book laptop hybrid. The new model features an improved processor, a 30% boost to battery life, and an R.R.P of $2,399 – coming November.

But the big announcement was the Surface Studio, an all-in-one designed to put the hurt to Apple’s iMac. It comes with a dedicated GPU, a 28-inch display (with a 192ppi pixel density), and a base price tag of $2,999.

Read on for all the finer details.

Microsoft confirmed that a new Windows 10 update would be rolled out in early 2017, and it would be called the Windows 10 Creators Update. The really good news is that it will be available for free on every Windows 10 device. And starting this week, early builds of the Creators Update will be issued to all Windows Insiders – that’s Microsoft’s beta-testing program, which you can sign up to for free.

3D design software: The first big change that’s being shipped with the Windows 10 Creators Update is a new focus on 3D – the slogan of the hour is ‘3D is for everyone’, apparently. It was all a little vague initially, but it seems like there’s going to be new 3D design software built into Windows 10 devices. The idea is that amateurs will be able to easily create 3D designs, a task that has previously has significant barriers to entry. This could be great for new-age technologies like 3D-printing or designing content for the Microsoft Hololens augmented reality headset.

“We create to evolve as a species, to express our biggest ideas,” said Megan Saunders, who works on Experiences at Microsoft. “We believe if we can empower the world with 3D, we can unlock a new era of creativity that can enhance your ideas and storytelling.”

She continued: “80% of people aged 12-24 believe the creativity is one of the most important things. In fact, they value it 14 points higher than previous generations.”

Saunders used her a Windows 10 app – part of the Windows Capture 3D Experience – on her HP Elite x3 smartphone to photograph a sand castle, turning it immediately into a 3D render on the handset. She then announced Paint 3D, an evolution of Microsoft’s MS Paint software. Saunders was able to add the 3D sand castle into a beach scene Paint 3D, as well as a 3D render of herself and her daughter, all in a virtual 3D space. Saunders was also able to create 3D designs manually using the ‘Doodle’ tool, which involved drawing a shape (in this case, a cloud) using a Surface Pen. 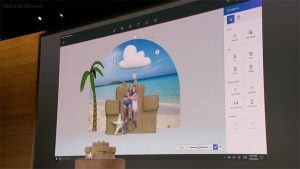 The Paint 3D software will also support Minecraft, with Saunders explaining: “With the Creators Update, not only will you be able to export your creations directly from the game, but you’ll also be able to 3D print them from right here in the community.”

But it’s not just Paint and Minecraft getting some 3D love. Saunders confirmed that 3D would be integrated across the “most popular Microsoft applications” over the next year, including Microsoft PowerPoint, where you’ll be able to import interactive, animated 3D designs into presentations.

Excitingly, Microsoft is also building its Microsoft Edge browser into the Hololens augmented reality headset. You’ll be able to pull out 3D objects from the browser – like Saunder’s omnipresent sand castle – and edit it in a 3D holographic space. 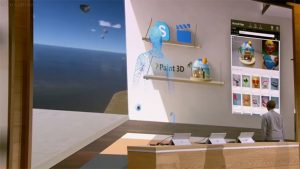 To empower all of this 3D goodness, Microsoft is releasing a number of “virtual reality accessories” that will let users create and enjoy VR. Manufacturers like Dell, HP, Lenovo, Asus, and Acer will be creating headsets with “inside-out, six-degrees of freedom sensors”. Myerson said: “This means there’ll be zero need for a separete room, zero need for a complicated setup.” The starting price for these Creators Update accessories will be $299 – UK pricing remains a mystery for now.

Gaming on Windows 10: Microsoft also confirmed that the Windows 10 Creators Update would have a big focus on gaming – and particularly game broadcasting and eSports.

“This year alone, Minecraft videos have been watched over 50 billion times,” said Myerson. “Game viewing is now a real social phenomenon, and this type of passion and innovation is inspiring us.”

He added: “Windows 10 will be your platform for gaming glory.”

Part of this involves building Beam – that’s an existing game broadcasting software – into Windows. When you’re playing, you’ll be able to start broadcasting with a single button press. Making the announcement, Jenn McCoy, from the Xbox team at Microsoft, said: “The popularity and time spent watching gaming is through the roof.” According to McCoy, viewers will be able to tune in from their Xbox, PC, or smartphone, and friends can be notified when you start streaming.

With the Creators Update, you’ll also be able to create custom gaming tournaments using ‘Arena on Xbox Live’. You can select different games, rules, and scheduling, while dull admin work like stats and scoring is handled by the ‘Arena’ feature.

“We want to give gamers the ability to create their own tournaments or challenges,” said McCoy. “You don’t have to qualify for a professional tournament, and you don’t have to track scores offline. ‘Arena for Xbox Live’ will do it all for you.”

The final gaming announcement was that bitstream audio passthrough, including Dolby Atmos support, is coming with the Creators Update for the Xbox One S Blu-ray player.

Social networks: Microsoft also reckons that social networks are way too complex right now, and wants to make it much easier to get in touch with your friends – as in your actual friends, rather than your 400+ ‘Facebook friends’.

“When we talk to our customers, we see a universal truth again and again: that most of our communications happen with a few key people,” said Allison O’Mahoney, who works on Windows at Microsoft.

The new ‘Windows Sharing Experience’ will understand a new concept called ‘My People’, where you’ll be able to quickly share content. Whenever you share media using the Microsoft Creators Update through Windows 10, you’ll see your favourite people first.

There’s also a new messaging system that will provide new ‘people icons’ that will let you quickly contact people on various platforms, like Skype or Mail. Each person icon will have all of an individual’s relevant Microsoft services included, so you’ll be able to ping people on the appropriate platform for any given occasion. The icons will also support emoji notifications; in reality, that means smiley faces and unicorns popping up above your task bar – that won’t be annoying at all, right? 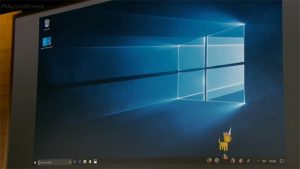 In a surprise move, Microsoft also announced a refresh of the old Surface Book laptop hybrid. In a bid to improve performance, the Surface Book now features more powerful Intel Core i7 processors. There’s also a redesigned heating system and a claimed 30% boost to battery life – that’s 16 hours per charge.

“Gamers, they want more frame rate. They just want it. I don’t really get it, but they want it,” said Panos Panay, who heads up Microsoft’s Surface division, who revealed that graphics performance had been doubled. According to Panay, the graphics on the new Surface Book i7 are three times as good as those on the highest-spec 13-inch MacBook Pro. 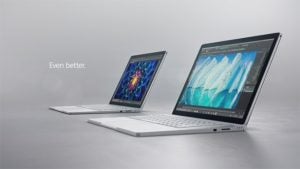 Other than those changes, the Surface Book i7 is practically identical to its predecessor. It’s available to pre-order from today for $2,399, and will go on sale in November.

As expected, Microsoft unveiled an all-in-one PC called the Surface Studio. It’s a blatant attempt to take on the Apple iMac, and it looks relatively impressive. It’s available for pre-order starting today, and will set you back a staggering $2,999, rising to $4,199 for the top spec model. If you want to try before you buy, you’ll be able to try it out at any Microsoft Store from tomorrow. But if you’re sure you want one, act quickly: Panay says the Surface Studio will be “available in limited quantities this holiday”.

“I believe in this thing, where your ideas can be one of your most valuable assets – each one of you,” said Panay, speaking about the new all-in-one. “I also believe that this product will help you bring your ideas to life.”

But what’s really exciting is that it’s just 12.5mm thick; Microsoft reckons it’s the “thinnest LCD monitor ever built” – and it certainly looks less chunky than an iMac. That said, the design is generally very similar to the iMac; I can completely imagine average customers mistakenly thinking the Surface Studio is an Apple device.

As far as specs go, you’re getting an unspecified quad-core Intel Core i7 CPU, 32GB of DDR4 RAM, a 2TB hybrid drive, and stereo Dolby 2.1 speakers. Oh, and a dedicated graphics card in the form of Nvidia’s GeForce GTX 980M GPU – that’s Microsoft’s top-end mobile GPU. We’re not sure why Microsoft didn’t opt for a desktop GPU, but Panay seems convinced that the Surface Studio is plenty powerful: “It has been phenomenal to use – no question. But performance is more than specs.” 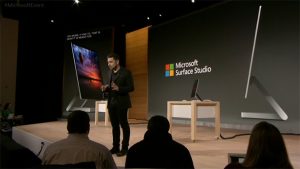 Also useful is a built-in microphone array that will let you summon Cortana, Microsoft’s virtual assistant, from across the room. You’ll be able to task her with setting reminders, searching for information, and all the other usual AI errands. And on the front, there’s a HD camera on the front, which will work with Windows Hello, Microsoft’s facial recognition unlocking system.

There’s also a unique hinge system that will let you lay the Surface Studio flat (like a tablet), or at various angles. 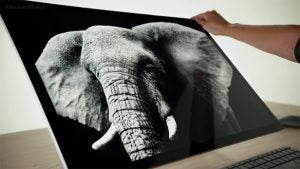 Microsoft also unveiled a new controller called Surface Dial, which is designed to work with the Surface Studio.

It’s a twistable knob that brings additional functionality to Windows, and is built right into the software’s global controls. For instance, if you’re writing or drawing, you can twist the Dial backwards to gradually undo your work. 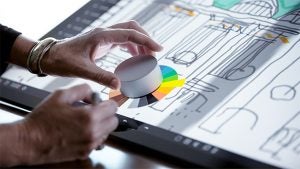 What do you think of today’s Microsoft announcements? Let us know in the comments.