Mine’s bigger than yours: what you need to know about the state of MicroLED TVs and they’re unlikely to become mainstream any time soon.

Everyone is excited about MicroLED technology. The way in which it combines the high-contrast benefits of self-emissive screens with the brightness and potential colour volume of LED technology sounds like a dream come true. So the fact that LG recently joined Samsung to show off a spectacular monster MicroLED screen is great news, right? Well…

The Samsung MicroLED ‘Wall’ has been shown before. It formed the showpiece of the Korean brand’s CES story back in January, and hit the headlines again in July 2018 when president of Samsung’s Visual Display Business, Han Jong-hee, suggested that a home cinema version was ‘in the pipeline’.

LG’s huge MicroLED screen hadn’t been seen before its appearance at IFA 2018. And since LG hadn’t managed to beat its great Korean rival to the punch in time terms, it obviously had no choice but to make sure its MicroLED debutante was bigger than Samsung’s. Much bigger, in fact: 173 inches to The Wall’s puny 146 inches. 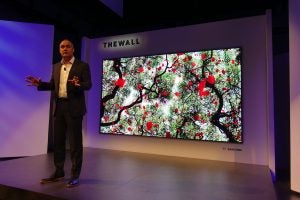 With its MicroLED screen, LG appeared determined to outshine its arch-rival in other ways, too. Its vast images were spectacularly bright, blazing off the screen with so much intensity that you wish you’d brought your sun-tan lotion. During a shot showing a sun-drenched vista, I swear you could actually feel the sun’s heat. Unless that was just the screen’s radiation gently cooking my intestines.

Even from a 10-metre or so viewing distance (LG wouldn’t let anyone get closer), the brightness was so intense you had to squint at times. Although LG didn’t specify the exact level of brightness the screen was producing, to quote Con Air: ‘My first thought would be… a lot.’

True to the MicroLED hype, however, this blazing brightness didn’t stop LG’s screen from delivering what looked like impressively deep black levels too. During a shot of a barn owl flying off a branch at night, for instance, the blacks around the  brightly lit owl looked inky and authentic. An inevitable fireworks demo sequence also showed the ultra-bright, colourful explosions of the fireworks appearing against a dark sky, with no hint of the backlight ‘blooming’ associated with non-emissive LED screens. 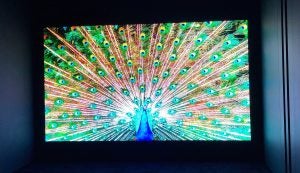 This combination of extreme brightness and contrast also contributed to a colossally rich-looking colourscape. There were colours on show here – especially in the brightest image areas – that living rooms haven’t seen before. The growing importance of colour volume (the combination of colour and brightness) in the TV world has never been more dazzlingly apparent.

As with Samsung’s Wall, the new LG MicroLED proposition is modular, meaning it’s created by joining numerous, much smaller MicroLED ‘blocks’ together. Happily, I could detect no trace of visible seams in the finished 173-inch image.

It’s worth noting, though, that as well as sitting you many metres away from its MicroLED screen, LG was also displaying it in a long, narrow room, where it was impossible to view it from any angle other than straight on. Up-close, or perhaps viewing from the side may have made any flaws in the ‘stitched together’ screen easier to see.

While LG’s MicroLED wall-sized screen looked brighter than Samsung’s (aided by being shown in a dark booth rather than an open show floor), it often looked as if the LG MicroLED’s brightness and colour range was operating beyond the range of the images shown. Certain tones looked unnatural and forced – a bit ‘digital signage’, in fact. The Samsung’s colours tended to look more controlled and authentic – although Samsung had perhaps been a little more astute with its demo material, focusing on more artificial, less naturalistic material than LG.

The LG MicroLED’s 4K pictures also looked less detailed and crisp than those of the also-4K Samsung Wall. This may have more to do with the difference in size between the two screens than anything else, since in pixel-per-inch terms, the Samsung inevitably scores higher than the larger LG. 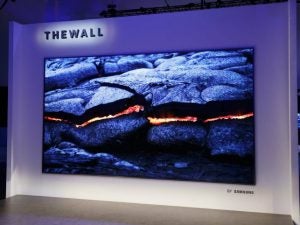 Although such comparisons and showboating oneupmanship between tech rivals might be fun, here it seems to be hiding a hard truth about the current state of MicroLED technology. Namely, that it doesn’t actually feel close to being a genuine living room proposition; no matter how much the president of Samsung’s Visual Display Business might suggest it is.

LG told me clearly at IFA that it doesn’t envisage the MicroLED screen it was showing at the event to ever become a domestic proposition. And even if Samsung lives up to its promise of making a thinner version of its Wall, built to different, potentially smaller sizes, the monumental costs of such a screen will mean that we’re still only talking – as Han Jong-hee himself acknowledges – about a ‘luxury model in the premium home cinema market’.

When discussing the potential for The Wall to become a consumer proposition, Jong-hee did state that Samsung had ‘completed the MicroLED technology’ and was ‘in a stage to raise production yields’. There are rumours, too, that Samsung was showing a 75-inch MicroLED screen to select audiences in a secret part of its IFA booth. 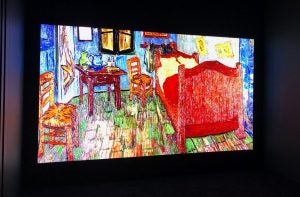 However, at the QLED & Advanced Display Summit in Los Angeles as recently as July, almost every MicroLED presentation implied that mass production of such screens remains an distant dream. And the fact that, currently, MicroLED is still having to be handled as a modular proposition rather than a ‘single screen’ points to difficulties in making such panels in a living room-friendly way.

So, yes, by all means lap up the sheer spectacle of two of the AV world’s biggest brands, hammering away at each other with their impossibly big MicroLED dream machines. Just don’t hold off buying one of today’s OLED or LED TVs because you’re expecting a manageable and affordable MicroLED TV to turn up any time soon.

In fact, right now I’m more excited by the incredible 10,000-nit 8K LED TV with which Sony wowed the world at the most recent CES.