4A Games’ Metro franchise is an excellent survival horror FPS series, the first two entries of which were remastered for modern consoles in Metro Redux. Now, the third instalment is on the way in the form of Metro Exodus.

Taking the series open-world, Exodus is already shaping up to be something special.

TrustedReviews has compiled everything you need to know about Metro Exodus including all the latest news, release date info, trailers and more.

4A Games’ Metro franchise has remained a beloved cult hit since its inception in 2010. Its focus on the stark atmosphere and unstoppable dread of a nuclear apocalypse helped it stand out from the miserable puddle of grey shooters to emerge in the past decade. Two entries later and the trilogy is closing with a truly ambitious vision that doesn’t quite take Metro open world, but gets pretty damn close.

The freezing wilds of Russia in the midst of nuclear winter remain a compelling place to explore, and 4A Games hasn’t sacrificed any of the detail that makes its world feel genuinely lived in. It’s absurdly miserable, but beautifully crafted in a way that’s impossible not to admire. Metro Exodus chronicles a journey across Russia as Artyom, our protagonist, seeks to escort his friends and loved ones to a place of salvation. This is done aboard a colossal train that must contend with numerous threats. The start of my 2 hour demo begins with the train being ambushed by a group of bandits, leaving the engine in tatters as you’re sent out to perform repairs.

This begins the season of Spring, one of four periods the tale of Metro Exodus will be split into. Presumably: Spring, Summer, Autumn and Winter will each be lengthy chapters with equally massive areas to sink into. This way, 4A Games can maintain the handcrafted feeling of past titles without succumbing to the usual open-world guff you’d expect from the genre.

Judging by terrifying mixture of shrapnel-addled fields and radioactive lakes, this balance is managed beautifully. Upon receiving my objective I was given free reign to explore. I could ignore the task at hand at my own risk or do as I’m told like a good person. I did the latter, and quickly stumbled upon a paranoid cult afraid of the technology that brought this nuclear armageddon upon us.

Considering I was packing an assortment of weapons and other fancy gizmos, they weren’t too happy to see me. Following my arrival I was immediately trapped, and offered a choice: take the easy way out and kill them all, or sneak out the backdoor without harming anyone, thus leaving my relationship with this faction intact.

Metro Exodus is wonderful when it comes to player choice, with subtle sound cues indicating  how your actions influence the wider world. How far this morality system permeates through the games narrative remains unknown, but there’s plenty of potential here to discover who the real monster is in this corrupt society. At its core, this is the same formula 4A Games created in 2010 with Metro 2033, albeit with huge refinements that make it feel like a modern marvel as it balances a number of systems with genuine weight behind them. Artyom carries a multi-faceted backpack with him at all times, capable of storing plenty of items and acting as a makeshift crafting station.

It turns an atmospheric shooter into one with plenty of nuance. Areas require specific items depending on the enemies and have a clear atmosphere that’s unique to them. A dilapidated tunnel ripe with radioactive fungi means it’s time to don a gas mask and hope you aren’t jumped out of nowhere. Stumbling through cobweb-ridden corridors without a lighter means you’ll move slower, something you really don’t want happening in Exodus.

Being able to tear a highly advanced rifle down to nothing before thrusting a range of your favourite attachments on it never gets old, and provides the already challenging gunplay with an extra helping of strategy. Firearms feel heavy and deliberate, and running out of ammo in the face of radioactive beasts is a common occurrence. You’ll need to improvise in Metro Exodus. Its post-apocalyptic hellscape possesses a palpable sense of realism as your fractured enclave struggles to survive.

Combat is in need of some balancing ahead of launch, though. Unless you’re pulling off flawless headshots, some foes take far too many bullets to defeat. It feels like a test of endurance as all of your ammunition is wasted. In a game where inventory management is so vital it feels like a needless detriment. I was playing on the standard difficulty. 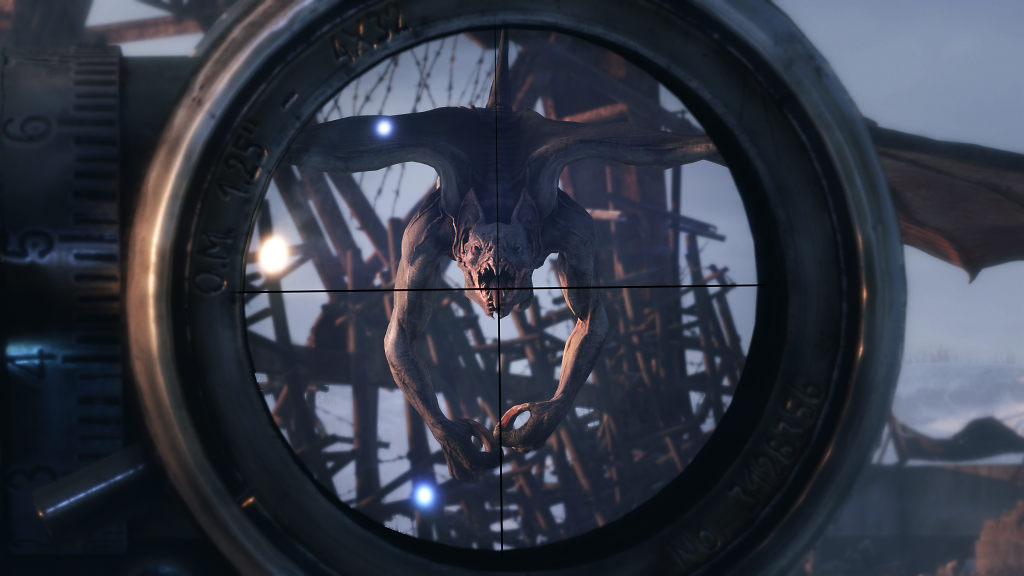 The world of Exodus is the real star here, presenting an unrivalled vision of a ruined world in an industry filled with them. However, it’s also showcasing a lot of potential when it comes to telling smaller, more personal stories as you explore. One of the highlights saw me stumbling upon a mother and her young daughter. I helped them escape the ruined town they called home, before escorting them to The Aurora.

However, my people weren’t willing to let them on-board. My good deed was for nothing, and I had to live with it or go out of my way to make a difference. It’s still unclear whether situations like this are commonplace in Metro Exodus, or if the player is free to tackle side activities designed to add extra weight to an already heavy world. Either way, there’s so much potential here for something brilliant.

Exodus feels like the culmination of the studio’s ambition vision. It’s dark, brooding and filled with enough grim atmosphere to ruin even the wildest of parties. A larger world allows the existing formula to be expanded in some truly exciting ways, providing elements that gel naturally with everything fans of the series have come to love.  While a handful of its parts still need refining, Metro Exodus is shaping up to a stunning post-apocalyptic adventure set to conclude an equally fantastic narrative.

What is Metro Exodus?

Based on Dmitry Glukhovsky’s popular novels, Metro Exodus is intended as the third instalment in a series that started back in 2010 with Metro 2033. Instead of being restricted to dank subway tunnels and brief pockets of Moscow Ruins, players will now have a much larger range of environments to explore.

Metro Exodus release date – When is it coming out?

4A Games’ confirmed at E3 that Metro Redux will be arriving on PS4, Xbox One and PC in the first quarter of 2019. It’ll also be playable in 4K on Xbox One X. 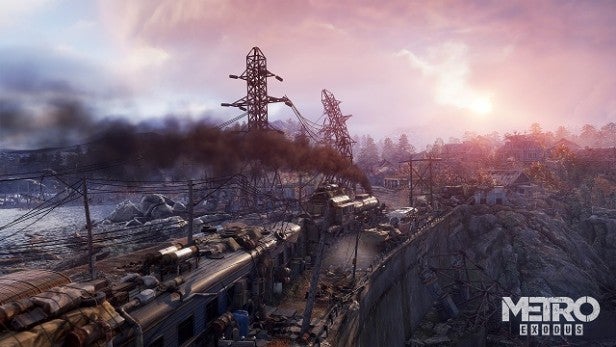 Metro Exodus gameplay – How does it play?

Metro Exodus is a first-person survival horror spanning across linear, claustrophobic environments and wide-open spaces to explore, as shown by the recent reveal trailer. While navigating the post-apocalyptic Russian Federation, players will have to keep themselves well-equipped and prepared for a manner of radioactive horrors.

Just like past games, a gas mask will have to be worn outside. Filters must be swapped to ensure you have a fresh air supply. If an enemy attacks you, cracks in your vision will remain as a bleak reminder of your potential fate. For dark environments, you have a torch and/or lighter on hand. These can be used to navigate obstacles and avoid potential dangers. 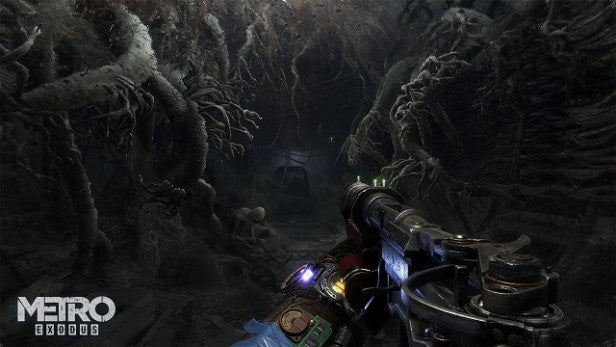 In terms of locations, Exodus is far more ambitious than its predecessors. Playing once again as Artyom, you’ll join the Spartan Rangers as they venture toward the Far East. Our hero will find himself travelling from Volga River to the snowy Ural Mountains. With any luck, they’ll maintain the same sense of tension and dread we adore from Metro.

Exodus will feature a dynamic day/night cycle and weather system, set to take full advantage of Microsoft’s Xbox One X. Weapons and items can be made using a multi-tiered crafting system designed to help you survive. You’ll have to do a bit of scavenging, though.

Metro Exodus story – What’s it about?

Set during the year 2036 following Metro: Last Light’s ‘Redemption’ ending, Exodus follows Artyom as he travels across Moscow in search of a new life. But he isn’t alone, joined by his wife, Anna, and a number of fellow survivors. Their journey will be treacherous, starting in the midst of a nuclear winter as you cower in the metro tunnels.

A recent report by Game Informer shed some light on how the world of Exodus will operate. The narrative begins in the Metro but will soon venture into the frozen wilds of post-apocalyptic Russia. It’s not open-world like Fallout 4, but instead a series of large sandboxes driven by exploration and linear missions. Once you leave an area, you can’t return, so make sure to finish up side quests before moving on.

Metro Exodus trailer – How does it look?

First showcased during Microsoft’s E3 2017 press conference, Metro Exodus received an impressive gameplay demonstration running on Xbox One X. Check it out below:

4A Games are almost certainly onto another winner here, and we can’t wait. Hope about you? Let us know on Facebook and Twitter.