Mercedes’ AMG performance line has rolled out overhauled versions of its S63 and S65 cars, bringing in fancier grilles and downsized engines.

Both versions of the performance-focused S-Class cars have the new Panamericana grille giving both the Coupe and Cabriolet versions of the cars a toothy, chrome covered nose that harks back to the 1950s Mercedes 300SL.

But the real changes happen beneath the bonnet, with the S63 AMG 4MATIC+ featuring a a twin-turbo 4.0-litre V8, downsized from the 5.5-litre engine to make it more fuel efficient yet still capable of producing 603 horsepower. Combined with a nine-speed automatic transmission sending that power to an all-wheel drive system, the S63 can make the sprint to 60mph in a mere 3.4 seconds.

The S65’s horsepower and torque are sent through an AMD Speedshift TCT seven-gear auto transmission to the real wheels, which means the 2.1 tonne car can hit 60mph in a swift 4.1 seconds, with it topping out at an autobahn-eating 155mph. An AMG Driver’s pack can be specced to tickle the limiter to a top speed to 186mph.

The S65 also comes with some chassis wizardry in the form of Mercedes’ Magic Body Control with Curve Tilt, which uses stereoscopic cameras to read the road ahead and tweak the suspension to essentially make the car lean into corners.

The S63 in contrast is a bit nipper thanks to a lighter kerb weight and launch control to fire it off the line and hit the same top speeds as its bigger sibling in spite of the smaller engine. 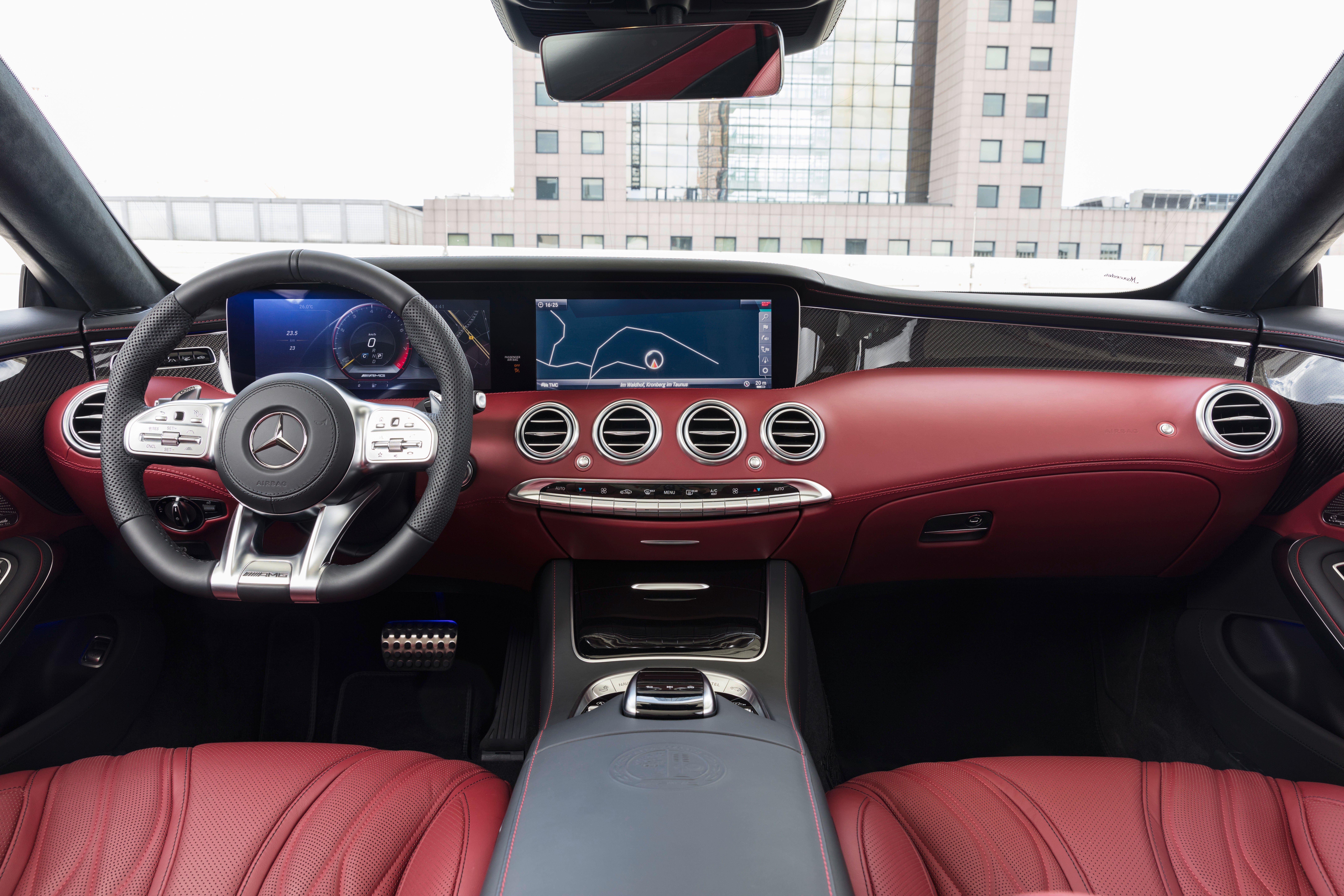 On the interior both cars have a suitably techy cabin as expected from the latest Mercedes cars, with the dash sporting a 31.2cm TFT colour display for relaying all manner of data from rpm and speed to driving modes such as ‘Comfort’, ‘Sport’ and ‘Sport+’. A whole host of interior options, such as trim options, can be selected for both the interior and exterior, including alternative wheels and a carbon package.

Mercedes also revealed updated versions of the S-Class coupe and cabriolet models, which while lacking the performance pizzazz of the AMG models, still come with improved V6 and V8 engines to cut emissions and improve efficiency, along with some design tweaks.

The aesthetic changes include OLED tail lamps as standard and a refreshed interior with new trim lines and 12.3-inch displays for the dash and infotainment system; the latter includes compatibility with Apple CarPlay and Android Auto to enable mobile apps to play nice and safely with the car’s entertainment head unit if the Smartphone Integration package is picked.

And improved driving assistance systems have been thrown into the mix, with Active Steering Assist and Active Distance Control DISTRONIC to help keep drivers a safe distance from other cars and adjust speed automatically ahead of corners and junctions.

Prices for the new AMG and standard S-Class cars have yet to be revealed, but they are traditionally the most expensive Mercedes cars outside of the supercars, so they will likely require a hefty wad of cash before drivers can get them on the road.

While Mercedes pushes out new versions of the S-Class, arguably the announcement car fans are waiting for is the full reveal of the much teased X-Class.