Unlike other brands, Meizu offers no difference in size between the regular and the Pro model. Both phones in the 17 lineup feature 6.6-inch Super AMOLED displays with fluid 90Hz refresh rates and hole punch-style front cameras. That’s a similar style to the OnePlus 8 which also packs a 90Hz panel.

The Meizu 17 is powered by the latest Qualcomm Snapdragon 865 chipset and uses UFS 3.1 flash storage. The Pro model includes LPDDR5 RAM for a 20% performance boost from its predecessor.

The phone packs a symmetrical design both where the camera module lies and in the weight distributed evenly between the top and bottom of the phone, presumably to keep the phone feeling comfortable in the hand, while the Pro version comes in a ceramic body. 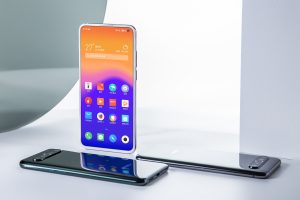 Meizu has yet to reveal price or release details for the UK and it remains to be seen whether or not we’ll see the device turn up on these shores. Trusted Reviews will update this article with information on a UK launch when we hear more.