“For instance, I just sold a Scarab Lord account today for $6,000.” Those are the words of Shane Jeffery, a guy who’s made a truckload of cash selling World of Warcraft accounts.

Jeffery is the owner and creator of premium account re-selling business KHAccounts, and has turned over an impressive $475,000 (£275k) of sales in less than three years.

The 29-year-old revealed his staggering success on an ‘Ask Me Anything’ Reddit thread earlier this week, detailing how he got into the business of peddling video game accounts for money.

“I originally started in the industry by trading my own World of Warcraft account (that had my actual name on it) for another one on the website MarkeeDragon.com. I got scammed and learned a valuable lesson that day,” explains Jeffery.

He continues: “It took me nearly two to three years to figure out how much money could be made by reselling accounts. I started to take the steps in and around May 2009 to build up a cash reserve (about $5,000) to start a good collection of accounts.”

“ and have been referred to as a ‘boutique’ as I only deal with the best of the best accounts,” adds Jeffery.

By day, Oregon, US-based Jeffery is the manager of a programming team, but KHAccounts.net has been so successful that it’s now his primary source of income.

That’s largely thanks to the impressive profit margins available through buying accounts from other users.

By this point, you’re probably wondering why anyone would want to pay such significant amounts of money for Warcraft accounts.

According to Jeffery, the accounts he sells have stuff that would take “years and years” to obtain, and that some of it “isn’t even obtainable anymore”. 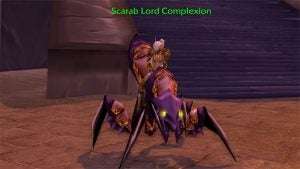 “The accounts that I tend to sell have 300 days played on them. So people are, in essence, buying a completely decked account with things that would take them 300 days played to achieve,” he explains.

Of course, there’s plenty of risk involved in the business.

“It is completely against the terms of service,” says Jeffery. “If Blizzard does indeed find out that an account has been sold for real world currency, they will ban the account. That being said, I have never had an account banned for being sold/resold. So I am not really sure what it takes to get an account banned in that regard anymore.”

He concludes: “If Blizzard someday comes across my website and served papers for it to be closed, then so be it. I am not breaking any laws.”