If you thought the Apple Watch Edition was expensive, think again, this Apple Watch will set you back a staggering £110,000.

Modded by renowned gadget gilder Goldgenie, the bank-breaking wearable is crafted from solid 18-carat gold and has been encrusted with a mass of precision cut diamonds.

One of a number of models in the modder’s new Apple Watch ‘Spectrum’ collection,

Despite the device’s glistening makeover, the Apple Watch Spectrum offers no additional features or user benefits – aside from its snazzy looks – than the £299, base model Apple Watch Sport.

If £110,000 is a little out of your price range, fret not. Goldgenie is offering a wide selection of bespoke models, all looking to one-up Apple’s latest efforts at high-end luxury.

Similarly, if shiny stones and precious metals aren’t up your street, why not plump for the exotic python or crocodile skinned straps.

All of company’s Apple Watch customisation options will be available for pre-order next Thursday, April 9, one day before Apple kicks off its own, official pre-order system.

Discussing the extreme levels of custom Apple Watch bling, Goldgenie founder and CEO, Laban Roomes, stated: “The Apple Watch will surely change the face of time and how we handle it.

“We all have a choice in what we do with time and we want to help people really make it their own. Time is a gift and a luxury customised Apple Watch will be a great reminder of this.” 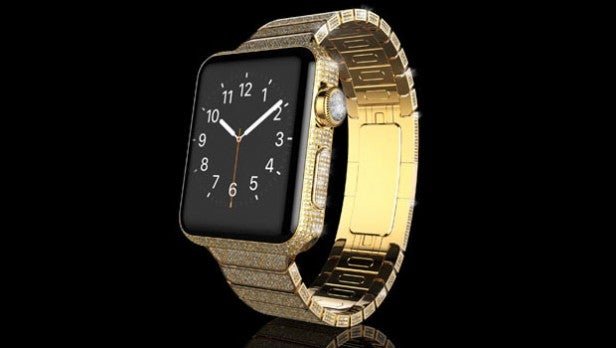