The Apple Watch might be the talk of the wearable town, but there’s a new contender for smartwatch dominance called Olio that wants to do things a little differently.

Olio is – surprise, surprise – a San Francisco-based start-up that was founded back in 2013, and is now selling its very own smartwatch.

The first thing to note about the Olio watch is that’s both the hardware and software are built entirely from scratch. That means it’s not operating run-of-the-mill Android Wear, and there’s no Snapdragon chip inside.

It’s got the usual software on board, like stop watches, weather information, and alarm clocks.

It also handles notifications fairly sensibly too. Alerts are split into things you might have missed, and things that will happen in the future.

Another software perk is the inclusion of Olio’s own cloud-based personal assistant called Olio Assist, which will apparently organise your life direct from your wrist.

What’s most different about the Olio smartwatch from the Apple Watch, however, is the fact that it doesn’t have any apps. And it never will, either.

“There is no app store,” explained Olio CEO Steve Jacobs, speaking to Forbes. “ as a category, let alone the small real estate of something you wear on your wrist.”

“Instead of forcing everybody to download all the same apps as on their phone over again or following the same paradigm that they do on a much larger device, what we do is connect the watch to all the apps and services that are important to you, vis-à-vis with the apps you already have on your phone.” 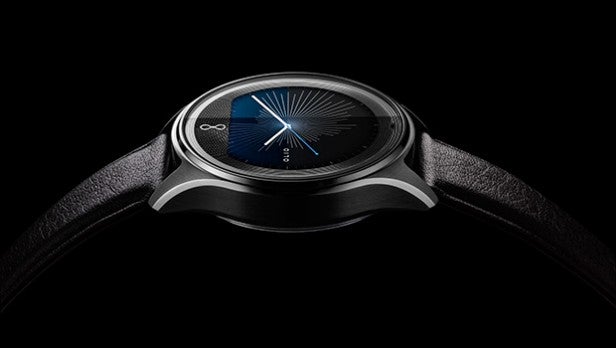 A premium design, with a suitably premium price tag…

Jacobs went on to describe how he thinks Apple made a major mistake with the watch, suggesting it tried too hard to emulate the iPhone’s app ecosystem for wearables.

“Apple said this was successful on the iPhone, so they’re porting it over,” said Jacobs.

“One could say they’re doing that because they’re still trying to find that killer functionality. But the last thing we need is another group of apps on smaller screens.”

That doesn’t mean the Olio smartwatch can’t do some pretty cool stuff; it’s got plenty of ways of interacting with the world around you.

With Olio, you’ll be able to unlock your car door using the device, and it’ll ping you with the option when you’re near the vehicle.

Similarly, as you’re approaching your home, you’ll be offered the option to switch on your heating via Nest through an alert.

In terms of hardware, it’s a fairly luxurious affair. The Olio boasts a stainless steel chassis that’s 48mm wide. That’s up on the Apple Watch’s 38mm and 42mm options. Visuals are provided by a 1.3-inch IPS display running at 216 pixels-per-inch. It’s waterproof to 50m too.

There’s a wireless charging coil built onto the back, with battery life estimated at around two days.

A host of tech is stuff into the device too, namely a Bluetooth radio, accelerometer, gyroscope, and a microphone that can be used for Siri and Google Now interaction. That means it’s Android and iOS friendly, for the record.

The device is up for pre-order today – two weeks prior to the Apple Watch launch – although it won’t start shipping until the summer.

It’s also worth noting that the initial run will be limited to 500 units, so if you want one then you might want to get a shuffle on.