Hey guys, I’ve heard Battle Royale’s are pretty big right now. First PUBG came out and blew the world away, then Fortnite one-upped it with a colourful art style and some neat base-building mechanics and, to cut a long story short, now every developer is parachuting into Battle Royale island to compete for their slice of the pie.

On the surface, Maverick’s 1000-player take on the genre, called ‘Proving Grounds’, sounds like a pretty cynical attempt to capture headlines in a genre that’s rapidly being crowded out by the likes of Call of Duty and Battlefield.

But when you dig a little deeper, the Automoton-developed third-person shooter has a lot more going for it than more players (900 more in fact), fighting in a bigger map (its 10km x 10km compared to PUBG’s 6 x 6 apparenly).

The reason for this is SpatialOS, a new way of handling cloud computing developed by Improbable that grabbed headlines back in 2017 when the company used it to raise a massive $500m in funding. 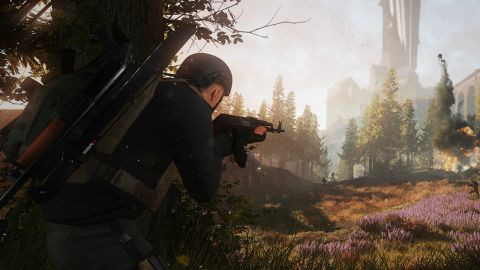 It’s not quite a game engine (instead, it works alongside them), and Improbable doesn’t have any servers of its own. Instead, what SpatialOS does is offers an incredibly powerful distributed computing platform, to allow for persistent worlds occupied by huge numbers of players.

Sure, you’ll only be able to play with 999 other players if you agree to play in a squad of five, but 1000 players is still a lot by any reasonable measure.

What this means for Maverick’s Proving Grounds Battle Royale mode (which will be first to launch in late 2018, followed by a social space and quest-driven open world in 2019) is a game-world that’s much more persistent, and much more dynamic.

Let’s say you’re squad is on the hunt, around a third of the way into a match. The mad scramble to gather your equipment is over, and now it’s time to start hunting down other players.

In a game like PUBG, there’s not much more you can do than journey around and wait to either discover another squad, or hear the gunshots that will lead you to their location, but it Mavericks you have so many more options.

For one thing, walking through wet ground will leave footsteps, and if you’re keen-eyed enough you’ll be able to use these to much more sneakily find another squad. If you get unlucky and find that rain washes these away, then you can even use the spent bullet casings and magazines to give you an indication of where other squads have been.

You have SpatialOS to thank for allowing these to become persistent features of the world.

Or maybe you’ll use the game’s wildlife to your advantage. Automoton plans to have various animals roaming the map. Birds will get spooked by running players, allowing you to pinpoint their location even if they haven’t fired a shot.

It all sounds very ambitious, and we were unsurprised to discover that much of this functionality had yet to be implemented when we played a couple of matches for ourselves.

The game is built on CryEngine, so despite being in an early alpha it already looks crisp and vibrant, but the gunplay itself felt a little more early, with a floaty feel that had nowhere near the same feeling of refinement or polish as other Battle Royales.

In its current state, Mavericks: Proving Grounds feels very early in its development, but with a closed beta due to start in August and a public release planned for later in the year, it’s got a lot of work to do before it can compete with more established Battle Royale games.

But we really hope it does get a chance to compete, and to grow, and to become the game that Automoton wants it to be. SpatialOS sounds like it could bring an unprecedented amount of strategic play to the genre, and the team sound like they have some great ideas for how to make use of it. Now they just need to turn theory into practice.

What do you think of the prospect of playing with 999 other players in a Battle Royale? Let us know @TrustedReviews