After coming to arcades in Japan last year, Mario Kart VR has finally arrived in the west. We went along to the O2 Centre in London to try it out for ourselves.

VR is exhausting. The headsets are heavy, claustrophobic and sweaty, and standing up was always going to be more effort than sitting on a nice comfy sofa, but the biggest drain is the exhilaration of the games themselves.

Fighting aliens across the battlefields of Farpoint or exploring underground caves in the zombie wastelands of Arizona Sunshine is an intense experience. It’s psychologically exhausting to have your brain tricked into telling you that monsters are constantly inches away from murdering you, and although VR games are getting longer and longer as developers get better at making (and financing) them, I could never spend the same amount of time in a headset as I do staring at a TV.

A preference for short, sharp pieces of action means that, increasingly, the arcade feels like the perfect home for high-end virtual reality experiences, and Mario Kart VR is a perfect example. It might only be three and a half minutes long, but the combination of hand-tracking, force-feedback from both the wheel and seat, and of course virtual reality, means that it feels far longer.

A made for the arcade Mario

It’s important to realise that this isn’t a complete, full-fat Mario Kart experience. Like the other arcade games based on the series, Mario Kart VR is an experience developed by Bandai Namco with Nintendo having provided little beyond the rights to the license in the first place.

After its release in Japan last year, the game has now made its way to the UK where it’s available to play in the Hollywood Bowl in London’s O2 Centre from today, and will be expanding to locations in Milton Keynes and Leeds later in the year.

Mario Kart has never exactly been a realistic simulation of real-world driving, but this release simplifies things even further. Rather than picking tracks, you’re treated to a greatest hits compilation of recognisable settings from the series, and your choice of character comes down to just four (Mario, Luigi, Princess Peach and Yoshi) which you’re assigned based on which of the four chairs you’re sitting in. 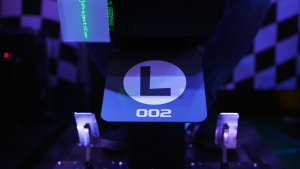 Even the racing itself is streamlined. There’s none of the drifting and boosting you’ll be used to from the console games, and you can forget about slip-streaming behind other players to gain additional speed.

So it’s simplified, but considering this is a game you’ll play once or twice rather than every day on your commute (thanks Mario Kart 8 Deluxe), that’s maybe not the worst thing in the world.

When it comes to the power-ups, Bandai Namco has made the best possible deviation from the core game thanks to HTC’s Vive Trackers, the small standalone tracking devices that let you turn anything into a VR controller. 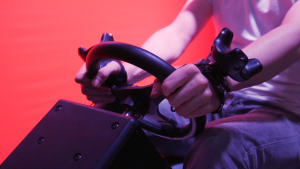 A pair of Vive Trackers keeps track of your hands.

In this instance, what’s being turned into a controller are your hands themselves. The tracking hardware isn’t the sleekest thing we’ve ever seen, and their bulk can make holding the steering wheel a little uncomfortable. That said, what they add to the experience is fantastic.

Rather than hitting the floating question blocks that traditionally litter Mario Kart’s tracks, Mario Kart VR sees powerups strung up from balloons that float alongside you. You don’t drive into them, you reach out and grab them with your hand.

This is where things get interesting. Instead of just hitting a button to throw a powerup forward, you’ll fling it physically using your hand. There are no buttons on the tracker (so you don’t have to worry too much about timing your throw) but when your body’s being thrown too and fro in a force-feedback go kart it’s surprisingly difficult to land an accurate shot.

We counted three power-ups during our time with the game; the traditional green shell and banana skin, and a hammer which can be used to squash other players in your immediate vicinity — an apparent exclusive for the arcade version of the game.

They’re all power ups that work remarkably well with motion controls. Sure, it would be cool to see more items like the ink-spraying Blooper or the shrink-ray Thunderbolt, but we can’t see these having quite the same motion-controlled appeal. 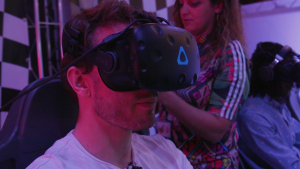 There’s a lot of hardware being used in this experience, to the extent that it would be almost impossible to put a similar setup together at home. Taking into account the Vive Trackers, the force-feedback kart and even the HTC Vive headsets themselves (sadly there was no sight of the upgraded HTC Vive Pro models in use), you’re easily looking at a setup that costs thousands, an absurd amount of money to spend on the small number of games that would support it.

At a price of £7.99 per person (or £24.99 for a group of four), the three and a half minute Mario Kart VR is about the same price as a cheap cinema ticket. It’s cheaper than Secrets of the Empire, the Star Wars experience from The Void that was the last high-profile VR experience to come to London which cost an eye-watering £32. Then again, it was also half an hour long. 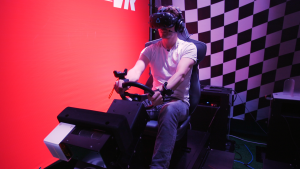 Despite the headsets having been available to buy for a couple of years now, VR is still a novelty, and novelties carry price premiums.

As someone who gets to use VR equipment fairly regularly for work, £7.99 feels a little expensive to me, but compared to the hundreds you’d have to spend to try it out as a consumer it feels like an absolute steal.

All they need now is the games, and Mario Kart VR is a great example of how to adapt a classic franchise into the realm of virtual reality.

How much would you pay to play Mario Kart in virtual reality? Let us know @TrustedReviews.