Everything you need to know about Mario Kart 8

Mario Kart 8 is the first Mario Kart title to come to the Wii U and although it doesn’t look like it’ll reinvent the kart racing genre, it should bring some life to the struggling Nintendo console.

What’s immediately different about Mario Kart 8 is the anti-gravity feature, which will see your little kart gain hover thrusters when you drive over certain pads. You’ll then be able to drive up walls and on the ceiling as well, transforming the tracks into twisting ribbons of mayhem.

Will this break the Mario Kart mould? Probably not, but it’ll certainly help increase the Wii U’s appeal.

We’ll update this page with any new Mario Kart 8 information, so bookmark this page to stay in the loop.

We were lucky enough to get some hands-on time with Mario Kart 8 for the Wii U way back at E3 2013, nearly a year ago now. What we saw there wasn’t groundbreaking, but it made us laugh, smile and want to play a whole lot more.

“This looks set to be as polished and entertaining a game as Nintendo has ever released. A little more exciting than the conservative Mario Kart 7, Mario Kart 8 could be a pivotal game for Wii U, which makes it a little disappointing that we’ll have to wait until Spring 2014 to play the finished product.” 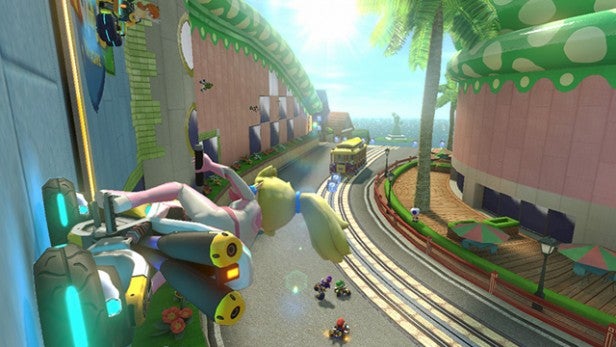 Mario Kart 8 Release Date: When is Mario Kart Wii U coming out?

Nintendo confirmed in February that the Mario Kart 8 release date has been set for May 30, so there’s not long to wait until you can get some Mario Kart Wii U action.

This could potentially be one of the biggest games to be released for the Wii U so far, so hopefully Nintendo will see the game inject some life into Wii U sales.

As for a Mario Kart 8 3DS release date, Nintendo is marketing the game as a Wii U exclusive, so don’t expect it to go portable any time soon. 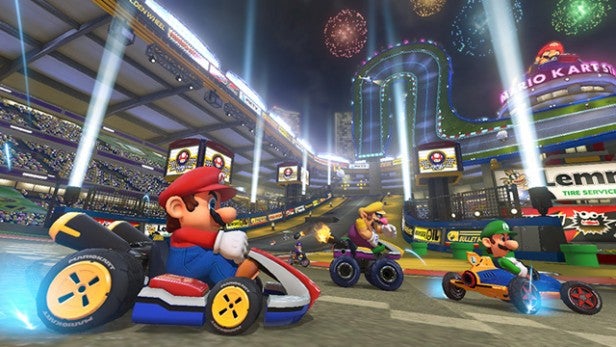 Mario Kart 8 News: What we know so far

The biggest differentiator for the eight instalment in the Mario Kart series in anti-gravity, allowing you drive along walls and ceilings of the tracks. You’ll be able to do this using customisable cars, bikes, gliders and even drive underwater.

You’ll also be able to drive buggies, a new class of vehicle unique to Mario Kart 8.

Nintendo offering Mario Kart 8 Wii U bundle
If you haven’t got a Wii U yet but want to play Mario Kart 8, then Nintendo has announced there’s a special bundle right up your street.

For £299.99 from the Nintendo Store, you can buy either the Mario or Luigi themed Mario Kart 8 Wii U bundle. Apart from the colours and markings, the two bundles offer the same kit.

You’ll get a Mario Kart 8 Premium Wii U pack, which includes a copy of Nintendoland, the 32GB Wii U console and Gamepad controller, a copy of Mario Kart 8, a themed steering wheel and gamepad protector, either a Mario or Luigi hat, a Wii Remote Plus and a Mario Kart 8 game guide. 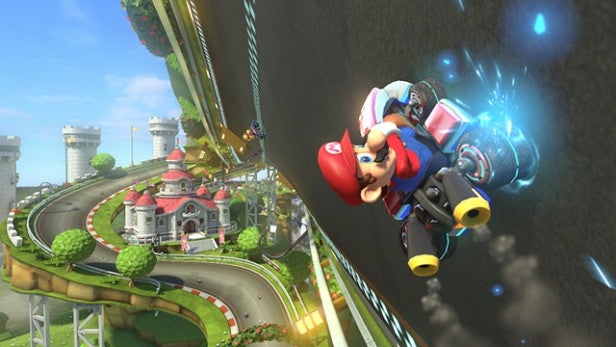 If you’re familiar with previous Mario Kart games, Mario Kart 8 is more of the same gameplay, but with a little twist – anti-gravity.

Not only will this brand new feature mix up the gameplay a little, it allows Nintendo to build more dynamic tracks. Apparently, the tracks themselves will be narrower, especially in comparison to Mario Kart Wii, making the races a little more manic.

Anti-gravity will let you drive across walls and ceilings, with your vehicle’s wheels transforming into anti-grav thrusters after you run over special on-track panels. When you’re driving along these new territories, if you smash into another driver, you’ll both start spinning and receive a speed boost a result, which is sure to become a little disorientating when you’re flying along the ceiling at top speeds.

Aside from the anti-gravity sections, which will change tracks into twisting, looping rollercoasters, Nintendo is bringing back the Mario Kart 7 hang-glider and underwater mechanics with Mario Kart 8.

You’ll be able to race using hang-gliders, karts and bikes like normal, but Mario Kart 8 will introduce four-wheel ATV buggies to the series. Apparently there are some other new features that Nintendo has yet to announce, but with the release date so close we’re sure we’ll find out more in the coming weeks.

In terms of Wii U GamePad integration, you’ll get the standard Off-TV Play options, but you’ll also be able to display the course map on the GamePad, or use it as your horn. You can toggle between all three GamePad options in-game as well.

What’s great about Mario Kart 8, though, is that you’ll finally get to play online Mario Kart. Nintendo promises 12-player online matches and a brand new version of Mario Kart TV that will let you share your best racing moments via the MiiVerse.

So far, there have been 27 confirmed playable Mario Kart 8 characters, with at least three more tipped to make appearances. Of this total, the Koopalings are making their playable debut with Mario Kart 9.

Here’s the list of the Mario Kart 8 characters confirmed so far: 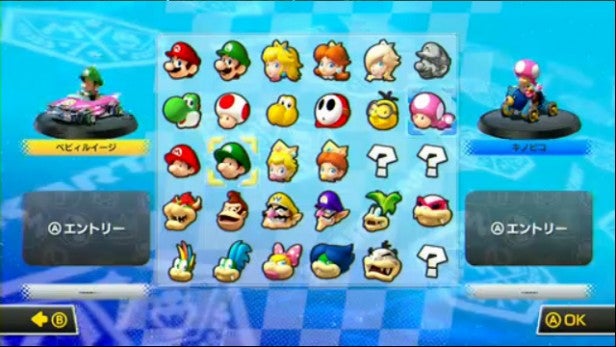 Thanks to the additional 16 retro tracks though, you’ll get a total 32 tracks to race around in Mario Kart 8.

Until the May 30 UK Mario Kart 8 release date, you’ll have to make do with the Mario Kart 8 trailers Nintendo has released so far.