Apple’s commitment to running out free annual updates to its desktop operating system is to be commended. It’s kept macOS looking fresh, ensuring that most people have access to the latest features and technologies. Each year, it’s hard to work out what kind of update you’re going to get – a flashy one that brings loads of changes and features you notice, or a more subdued launch where the changes are mostly under the surface.

This year, macOS High Sierra is firmly in the latter camp, as Apple has mostly focused on under-the-bonnet changes to get its OS ready for the future. That’s not to say that the changes aren’t important, but just that you may not notice a lot different going on, compared with macOS Sierra.

Updated: Apple has now revealed that High Sierra will launch on September 25. We’ll be reviewing the update soon after launch, but for now let’s take a look at the features that matter and what you can expect when you get the notification that your update is available.

Related: How to download the High Sierra beta right now

Macs have used the Hierarchical File System (HFS) for years, but it was designed in an age of mechanical hard disks. Today, the vast majority of Macs use flash storage and, indeed, thrive using it, with vastly improved responsiveness and boot times. As a result, macOS High Sierra introduces the Apple File System (AFS), which your existing storage can be converted to during the update process. 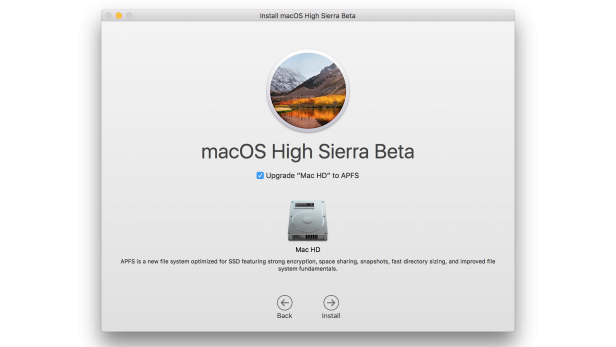 Built for SSDs and 64-bit architecture, this promises better file performance across the board, including making file duplication and finding the size of a file or folder happen instantly. Certainly, it appears to work, with the duplication of a 500MB folder happening without a single status bar appearing. Larger duplications, such as copying a virtual machine, still required a bit of time, however.

Built-in encryption helps secure your data, while the new file system can take snapshots of your system files, which makes it easier for backup software, such as Time Machine, to protect your computer.

Finally, AFS is more efficient than HFS, which could help you reclaim some extra disk space. Before upgrading our 2014 Macbook Pro to High Sierra, we had 352GB of free disk space; after, we had 357GB.

The High Efficiency Video Codec (HEVC, or H.265) is the standard used for 4K video. It offers better compression over the older H.264 standard (up to 40% greater) and is now natively supported by Mac OS. The result is that you can stream smaller files or create smaller video files, all without losing image quality. Only Macs with a sixth-generation or newer Intel processor (Skylake and, currently,  Kaby Lake models) will support HEVC, so we weren’t able to test this on our older machine.

If you have a Thunderbolt 3-equipped Mac, you’ll soon be able to use external GPUs. Macs have long lagged behind PCs in gaming performance, particularly as iMacs and MacBook Pros can’t be upgraded and rely on mobile GPUs, so it’s good to see this option coming. Hand in hand with this comes support for VR, with Valve’s SteamVR and HTC Vive VR getting direct support. Will this be enough to turn the Mac into a proper gaming platform? It’s too early to tell, but it’s a step in the right direction. 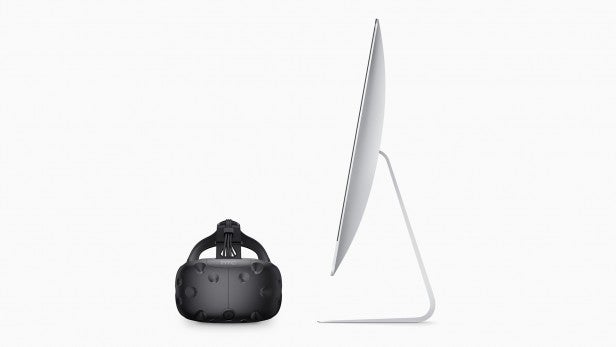 Apple has poured a lot of resources into Safari, aiming to make the web a lot less annoying. For starters, the built-in Auto-Play defence is quite amazing, preventing sites from annoying you with video and audio that starts automatically. Ahem. Controls are granular, letting you block everything, only content with sound, or controlling on a site-by-site basis. How good is the protection? Really good: Safari stopped every single site we visited from playing content automatically. Finally, some peace and quiet while browsing the web. 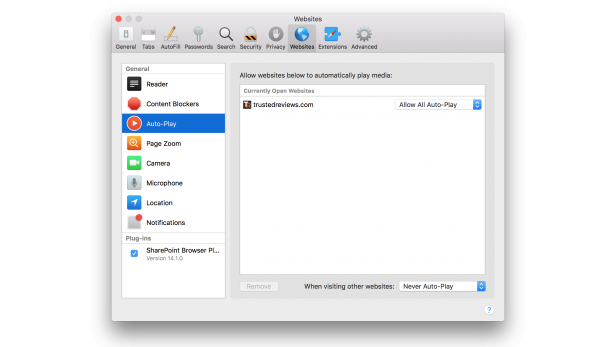 Apple has also built in tracking protection, which uses machine learning to work out which ad networks follow you around the web. You know the ones, where you look at a product on one site and then see adverts for it for weeks on end everywhere else. Currently, the tracking protection works brilliantly; in the last week, since the beta launched, we’ve not seen one tracking ad.

Ad networks will most likely try to get around the issue, so it’ll be interesting to see how this feature plays out in the future when it’s more widespread. Having said that, search overlord Google is also working to tackle the issue, working that feature into the Chrome browser andhinting that it will de-rank sites that automatically play video ads from its search listings, so it could well be the beginning of the end of this irritating practice.

Given how annoying the web has become to use, these changes may just be enough to push some people to use Safari as their default browser. Chrome still has some advantages (offline Drive and Gmail, and a wider choice of add-ons), but Safari is closing the gap. And, as Apple says, Safari is quicker than Chrome in a lot of scenarios. Running a couple of benchmarks on the 2014 MacBook Pro, Safari scored 5049 in Peacekeeper and 256.4 in Motion Mark; Chrome scored 4529 and 160.96, respectively.

Notes feels like an application that hasn’t been touched in a long time. Its biggest issue is that the list is sorted by last-edited, making older notes harder to find. With macOS High Sierra, Notes can now be pinned. Tables can now be added to Notes, too, giving another option for recording data. These are both needed changes, but a complete overhaul would have been nice. I still prefer the way that Google Keep lets you organise notes, and it comes across as the more modern application. 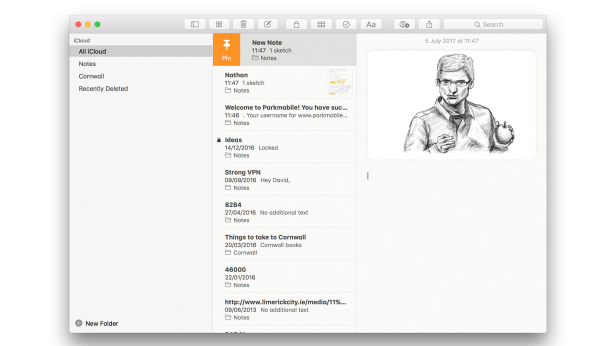 By default Mail now compresses all messages, giving a disk space saving of up to 35%. And search has been overhauled, with Mail now returning results based on the emails you read, who you reply to, and anyone in your VIP list. This is a feature that’s designed to improve over time, as Mail learns more about you.

Both are simple changes, but will only apply to anyone who uses the client. If you’re a Gmail user, the web interface is still arguably better, as it’s easier to search and Mail doesn’t support Labels properly (it treats them as folders, where a message can only belong in one at a time; in Gmail, a message can have multiple Labels).

We’re big fans of Photos, as this dedicated app feels more responsive and is easier to use, in many ways, than the web-based Google Photos. With macOS High Sierra, Photos gets a few tweaks. The sidebar is now always on and has been expanded so that you can view photos by the type (bursts, selfies, Live Photos and the like). 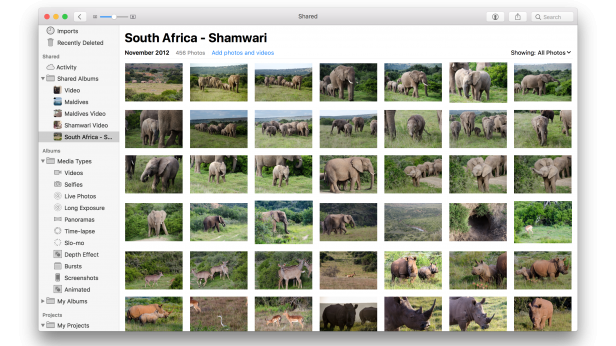 There are some new filters and editing tools, including curve editing for finer tweaking of contrast, brightness and colour. We like the Selective Color tool, which lets you adjust the Hue, Saturation and Luminance of one hue without affecting the rest of the image. There’s now enough in Photos to take care of most people’s photo needs, although serious photographers will still find that Lightroom is the better choice, with a wider selection of tools. 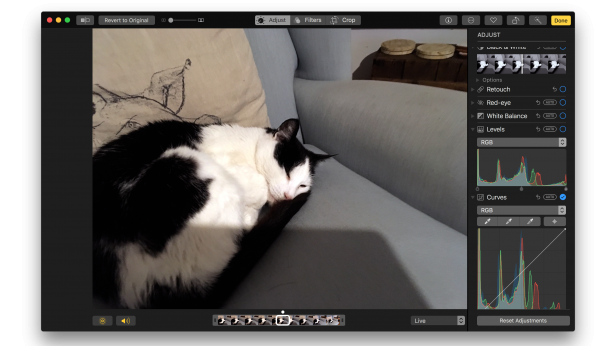 At last, Photos lets you open and edit images in another app, such as Photoshop. All changes are saved back to your Photos library non-destructively, giving you two versions of an image.

With iCloud, there are new family options, letting you share your storage space between family members. Certainly, this makes billing and management a lot easier in a household full of users. Pricing is very good, too, with 200GB of storage for £2.49/$2.99 a month, and 2TB for £6.99/$9.99 a month. 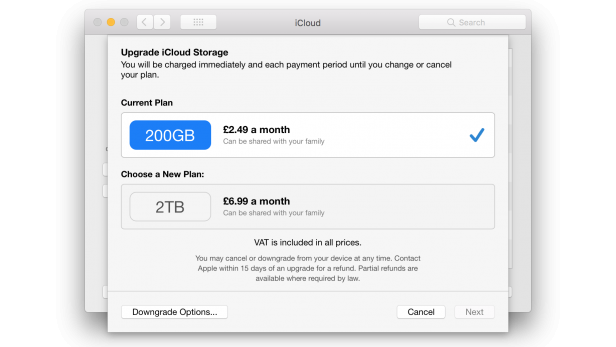 In iCloud Drive, you can now share files with other people, so you can all collaborate, with each person being kept up-to-date with changes. Some third-party apps can even work directly with files in iCloud Drive.

Finally, iMessages can be stored in iCloud. Set up a new device to use iMessage, and this option makes it faster to retrieve old message threads. 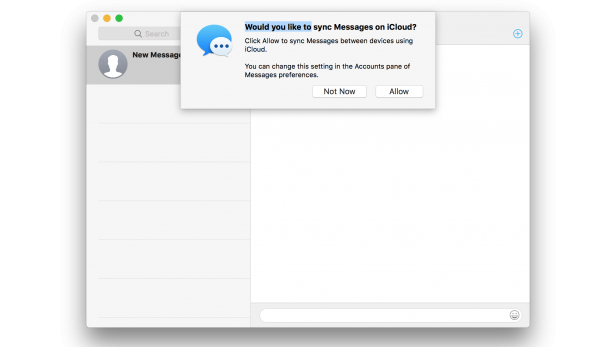 With macOS High Sierra, the Universal Clipboard let you share the contents of your clipboard between iOS and Macs: you could copy something on your iPhone, for example, and paste it on your Mac. Now, this feature has finally been extended to work between nearby Macs; copy on your iMac and you can paste into your MacBook, or vice versa. It’s strange that this feature has taken so long to implement.

If that FaceTime chat is too good to ignore, you can grab a Live Photo in the middle and save it for posterity. Both sides are notified that the Live Photo has been taken.

Spotlight has been updated to present more information. Enter a flight number and you’ll see a map of the flight path, and the current information. It would be nice to see Apple take this a step further and learn about your flights automatically, presenting the information as you need to see it. This is something that Google Now does, pulling flight information from recent searches or your Gmail. If you’re a heavy Spotlight user, searches can now bring up multiple Wikipedia entries where applicable, too. As in iOS 11, Siri on macOS High Sierra gets its own more expressive and natural-sounding voices. This is a good move, as Siri has started to sound more mechanical when compared to other voice assistants, such as Alexa on the Amazon Echo.

Is macOS High Sierra worth installing?

With few changes that you can notice, macOS High Sierra isn’t the most exciting update from Apple on the surface. Underneath, the technological improvements, such as the new file system and external GPU support, set the operating system up for future improvements, particularly on newer hardware. As such, macOS High Sierra is an important update, even if you won’t realise its full benefit today.