The MacBook Air with M1 chip is a refreshed version of Apple’s famous lightweight laptop.

The first chip in Apple’s transition away from Intel is the Apple M1, and along with making the silicon official, Apple has showcased a new laptop that will be powered by it. The MacBook Air with M1 packs some serious improvements to battery life and general performance – even if it’s familiar in its design.

Apple said this M1 silicon has an 8-core CPU, 8-core GPU and a 16-core neural engine for far better machine learning. This is also a 5nm chip, just like the A14 in the iPhone 12, so it’s super-efficient and packed with 16 billion transistors.

Keep reading on for more details on the new MacBook Air with M1.

The MacBook Air is confirmed to hit stores on 17 November 2020, with orders for the laptop open right now.

The Mac mini and MacBook Pro with M1 will also launch on the same date.

The MacBook Air has a starting price of £999, with a more expensive £1249 option seeing a slightly more powerful GPU and the SSD storage capacity upgraded to 512GB.

Apple has erased all of the previous Intel configurations of the MacBook Air, despite only launching a few months ago. Third-party retailers will probably still be selling the Intel models for the foreseeable future, but won’t offer great value since they share the same price point as the new Apple M1 versions. 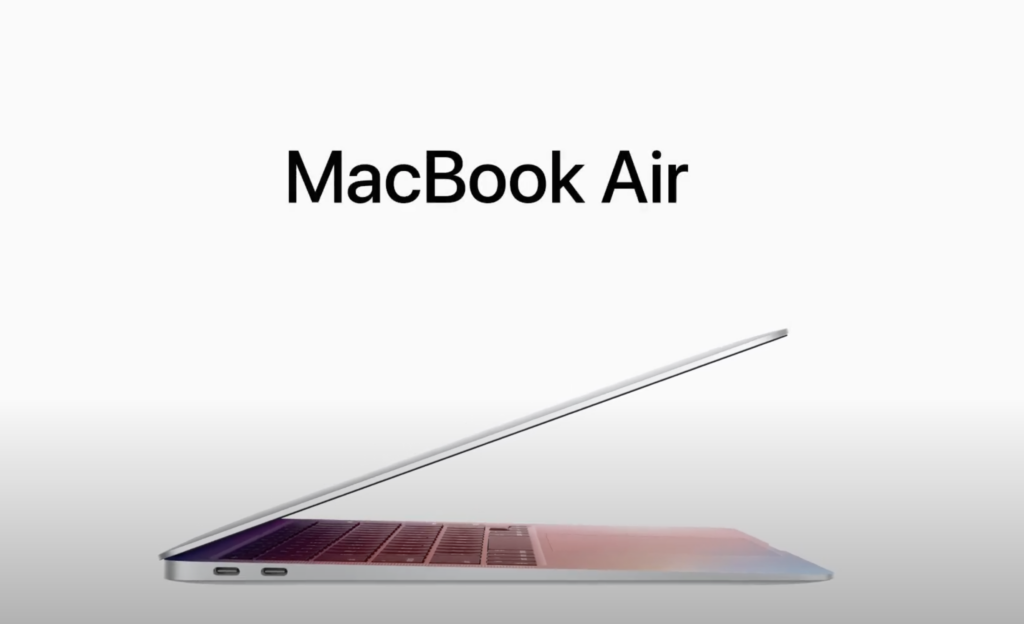 Apple claims the performance gains here equate to 5x faster graphics and general 3.5x faster CPU performance. Apple didn’t state what they were comparing against, but we assume it’s the previous £999 Intel model. As an example of the power here, Apple said you can edit multiple streams of ProRes 4K footage and that it’s faster than 98% of laptops sold last year.

Other improvements that come from that new chip include a 2x faster SSD and improved battery life. Apple said you should get 15 hours of wireless web and 18 hours of video, a notable upgrade over the current models. There have been some upgrades to the webcam too, however it doesn’t look like the resolution has been boosted. Apple has detailed some of the improvements over the Intel model, which you can see below:

One big change is the switch to a fanless design, which means your machine will be completely silent.

Now, there’s still a lot that’s familiar here. The design is basically the same and the 13.3-inch Retina display is the same aside from wider colour gamut support. You’ve got 2 USB-C ports, RAM options up to 16GB and SSD sizes up to 2TB. This is very much the MacBook Air we knew, just with the benefits of Apple Silicon.

Now, of course, as with any seismic shift in internals, there could be some issues. We’re still not sure on proper app compatibility and how fast apps will perform if they’re not specifically built for this silicon. Apple did highlight that Lightroom, among others, will be getting a dedicated Apple Silicon update next month and there’s wide support for iOS apps too.

The new MacBook Air with Apple M1 chip is available to today, with prices starting from $999. They’ll start shipping next week. Keep an eye on Trusted Reviews for our upcoming review.