Logitech might not command hype like Apple, but it’s a market leader that’s shown consistent dominance of the computer peripheral industry. Why?

TrustedReviews was invited for a tour of Logitech’s Swiss headquarters, getting a behind-the-scenes look at what makes the 34-year-old company so successful.

Most people will never think about what goes into building a gaming mouse. Nonetheless, hard at work in Logitech’s labs are highly skilled engineers developing what is tantamount to a Formula One racecar for your desk.

The company’s latest mouse is the Logitech G900 Chaos Spectrum, which we love – you can read our review later today.

But how does Logitech make sure that its priciest devices stand up to extensive use by amateur and professional gamers alike? Here are five things we learned about building a gaming mouse. 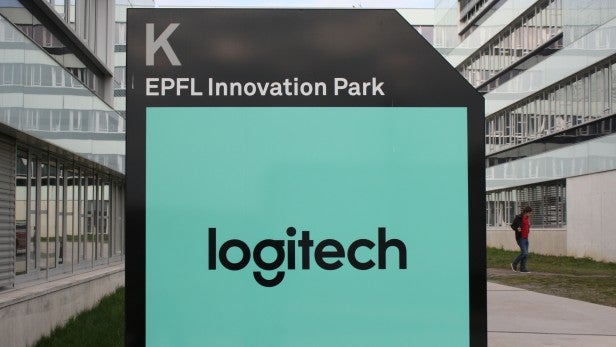 The entrance to Logitech’s Lausanne HQ

Sensors are really hard to get right

Gone are the days of ball mice. The world has moved on, and most of us now rely on lasers and optical sensors to keep our cursors wiggling. But while you’re probably fond of your office mouse, a senior Logitech designer tells us that the “level of expectation of gamers has nothing to do with office use” anymore. Gamers are a demanding lot, apparently.

Thankfully, the optical technology in mice has improved significantly over time. For instance, Logitech revealed to TrustedReviews that one of its greatest challenges was “master the design of glass-tracking” i.e. having a mouse work correctly on glass surfaces. Glass is “almost optically perfect”, a Logitech engineer explains, which makes it extremely difficult to track accurately.

After much deliberation, Logitech managed to build a sensor that could track tiny flecks of dust on a glass surface. And over time, the engineers managed to refine the sensor module, bringing it down to about a hundredth of its original size. Now, glass-tracking is commonplace, but it once looked like this… 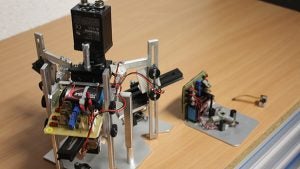 Three iterations of Logitech’s glass-tracking sensors, in chronological order from left to right

So what does the future hold for optics in gaming mice? Well according to Logitech, most of the “room for improvement” lies in power efficiency – that’s true across in all walks of consumer tech, mind.

But despite the difficulty of perfecting optics, the quest for ultimate mouse-dom is far from over. There are a lot more components that go into a mouse than just the tracking sensor. That raises the next problem: how do you squeeze all of those innards into an attractive and, more importantly, ergonomic body? Not easily, it turns out.

Designing a mouse is nightmarish

Enter, Logitech’s mechanical engineers. The team of designers who worked on the Logitech G900 are based in Cork, Ireland, but all of the prototype designs were shipped out to Lausanne so Logitech could demonstrate how excruciating designing a mouse can be. 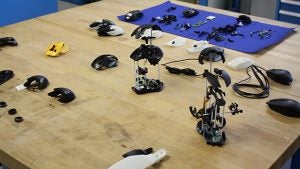 For instance, one of the main stipulations in the G900 brief was making sure it was lightweight. But that’s no mean feat when it comes to wireless mice, which are notoriously heavier than their wired counterparts.

The result is a mouse that weighs just 107 grams. Take it from us: that’s feathery for a wireless gaming mouse.

A Logitech designer tells us the entire process for designing the G900 started around three years ago, but that’s “not typical” for other devices. It’s “usually 2-years for high-end devices”, which includes “six months” of rigorous testing. Part of that qualification process includes a three-month stint in a clicking machine that sees mouse buttons pressed an incredible 20 million times. See, automation is a good thing.

The process also involves drop tests, normally 80cm from the floor, but also up to 150cm – average desk height – to ensure sufficient hardiness for everyday use. 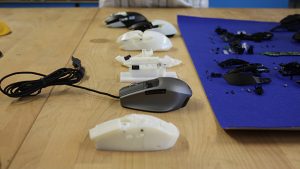 According to Logitech, “sound has a huge impact” on the user experience too, so the engineers had to make sure the clicking noise in the G900 was up to par. Apparently, weak-sounding clicks can lead consumers to believe a mouse isn’t premium, and the same is true for a keyboard’s key ‘clack’ too.

All this sounds like a huge pain in the rear, and it really is. Logitech says that during the course of designing the G900, the team went through between 300 and 400 prototypes. I think we’re going to need a bigger table. 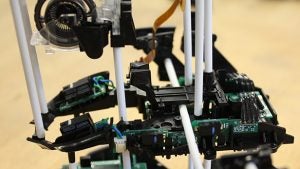 Invisible waves could screw up your gaming

So we’ve built a mouse. It looks great. It feels great. And crikey, it even sounds great too. But does it actually work how it’s supposed to? To find out, Logitech dropped a shedload of cash on testing facilities that are so rigorous, they make us glad we weren’t born with a scroll wheel on our backs.

The Logitech G900 is a wireless mouse. That means it connects to your computer using radio frequencies (RF), rather than your bog standard USB cable. The problem lies herein: your home is stuffed full of devices that also use radio frequencies too. Phones, tablets, laptops – even your ruddy smart kettle. So then imagine the worst-case scenario of playing games at a LAN party or a tournament; the interference is incredible. That’s why RF testing is hugely important to Logitech.

It’s also why Logitech spent 600,000 euros on an anechoic chamber. 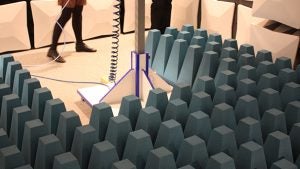 Anechoic literally means non-echoing, or echo-free. So an anechoic chamber is a room that’s designed to completely absorb reflections of sound and waves. They’re also pretty quiet too, as a result.

Logitech uses the room to blast radio waves of varying frequencies at the mouse. The mouse, in turn, is connected wirelessly to a receiver 1.5-metres away. Logitech can crank up the RF noise, and easily track exactly how well the G900 performs under pressure. We’re told that Logitech tests noise to the degree of “a worse-case scenario than the one we measured at a LAN party”.

To ensure that the G900 has good RF capability, it was designed to switch to less noisy frequency channels dynamically. That means that at any given time, the G900 is operating in the best possible channel to minimise jitters. 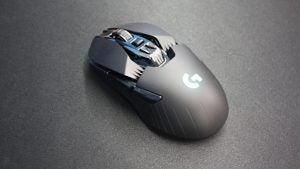 The team also mapped the radio pattern of the G900, and worked with the designers to ensure the antenna was in the best possible position to maximise performance. The engineers reminded us of Apple’s antenna fiasco that saw the iPhone 4 plagued with connectivity issues. This is important stuff, guys.

But RF is only one small part of the overall testing process. When you’re building a high-end gaming mouse, you have to get every facet right. And with something as important as clicking, it needs to be perfect.

Never underestimate the importance of clicking

The left button on a mouse takes more of a beating than any other part of the device. Moreover, the importance of your actions being replicated on-screen during gameplay in a timely fashion is very important. But there are plenty of limiting factors involved.

First, you decide you want to click. Then your finger moves. That’s the first delay, and Logitech can’t do anything about that. It’s all on you. Next, you have to account for the distance between the button and the switch. That short travel time between your press and the switch inside the mouse being activated is added lag. Then the click has to be relayed – either wirelessly to a receiver, or directly through a cable – to the USB port. And if you’re gaming online, you then have network latency to contend with too. Logitech can’t do much about that either, but minimising the click-to-USB delay is very much within the firm’s control. 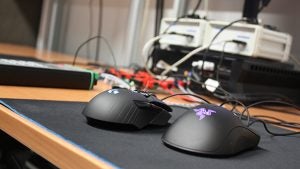 Logitech has built a testing rig to measure the latency between when the switch inside the mouse is activated by your click, and when the click is actually registered at USB level. With all of the limiting factors we’ve mentioned, keeping latency low is of the utmost importance.

While the rig was designed and put together by Logitech, the system that actually measures the time is built by Tag Heuer. It’s the same system used for professional skiing and Formula One, and is accurate to a hundredth of a millisecond. Not bad.

Logitech tells us that the entire rig is just “three or four months old”, but is vital to determining how its top-end mice – like the G900 – fare against the competion. 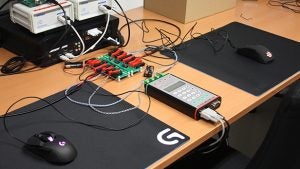 By this point, you’re probably wondering where all the robots are. No? Well you should be, because robots are awesome.

Fortunately for us, Logitech has its very own robot arm that it uses to test the tracking capabilities of its mice. The robo-appendage swings like a pendulum across an interchangeable surface, measuring at what velocity the attached mouse fails to track successfully. 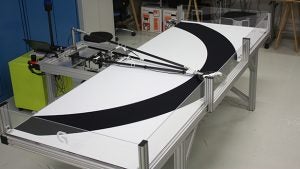 Logitech has a few alternative versions of this technology, including a spinning disc – a bit like a record player – that tracks continuous circular motion. Unlike the robot arm, this time it’s the surface moving, not the mouse. This allows Logitech to measure the delay between the start of the motor, and the very first report received by the system at USB port level. This latency can then be compared against competitor mice.

What was startling is that the difference between tracking latency on the G900 was negligible between the wired and wireless versions. In fact, the tests showed that the wireless G900 had an average tracking latency of 4.5ms, which was better than the wired Razer Deathadder Chroma (5.5ms). And Razer’s new wireless Mamba (2015) had reports coming in as late as 17ms. 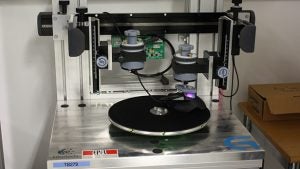 Anyway, as if all that wasn’t enough, Logitech also has a machine that tracks multi-directional motion on the firm’s own mouse surfaces. If there’s an angle a mouse can move in, it appears Logitech has a robot to test it. 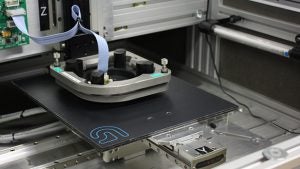 The moral of the story is this, folks: don’t take the humble mouse for granted. With all this technology, they’ll probably be sentient within a few years, and then you’ll wish you had been nicer to the little guy on your desk.

What’s the best mouse you’ve ever used? Did you trade in your mouse for an iPad years ago? Let us know in the comments.