LG has announced two super-portable, battery-powered projectors that can flood your wall with up to 100-inches of televisual awesomeness.

The LG PH450U and LG PH150G are the latest additions to LG’s Minibeam range, and will be fully debuted at next month’s IFA 2016 technology tradeshow in Berlin. Until then, we’ve got plenty of juicy details to pore over. Speaking at the announcement, Tim Alessia, Senior Director for Product Marketing at LG, said:

“With more variety than ever before, LG’s expanded line-up Minibeam projectors offer expanded features with enhanced connectivity for consumers, which means delivering unparalleled freedom and viewing convenience of enjoy entertainment.” 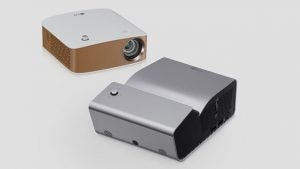 The star of the show is the PH450U, which is one of the brightest (specifically, 450 lumens) battery-powered ultra short-throw projectors available right now. You’ll be able to chuck an impressive 80-inch HD (1,280 x 720 pixels) image onto a wall from a distance of just 13 inches.

You can also set the PH450U in an upright position and render images on any flat surface. That means you could basically turn your work desk into a movie screen, pending your boss’s approval.

So, here’s the less exciting – but important – stuff: it’s got a HDMI port, a USB port, and a rechargeable 2.5-hour battery built-in. Its total weight is just 2.4 pounds, so it’s pretty light – drag this to your mates’ houses and become the envy of your circle. Maybe.

The smaller, but by no means less interesting, projector is the LG PH150G. It’s a mere 1.1 pounds, and also features a 2.5-hour battery. What’s exciting about this is that although it only offers 130 lumens of brightness, it can squeeze out a mega 100-inch screen with a HD (1,280 x 720 pixels) resolution.

Both projectors will be available in the UK starting in September, although local pricing is yet to be confirmed. In the US, the PH450U will be available for $649.99 from October, while the PH150G will cost $349.99.

What do you think of LG’s new projectors? Let us know in the comments.