LG G8 − Release date, price, rumours, and all the latest news and leaks

We’re expecting several of the highest profile phones of the year to launch this month, either at MWC 2019 or slightly before, and the LG G8 will be one of them.

We’re now just a few weeks away from MWC and the likely release of LG’s next flagship. We’ve heard plenty about what LG might be unveiling, all which you can read below, but this might be our best look at what the phone is actually going to look like.

Usually super-reliable leaker Evan Blass has tweeted a few official-looking snaps of the LG G8 ThinQ and, well, it looks a lot like the outgoing LG G7. That’s not necessarily a bad thing; the G7 wasn’t an ugly phone, but it doesn’t look very ‘2019’.

From the leaked pictures it shows a phone with a prominent notch and border around the display, with dual cameras on the back and a physical fingerprint sensor. The appearance of this fingerprint scanner seems to imply that there won’t be an in-display option like we’re expecting to see on the upcoming Samsung Galaxy S10.

You can see the leaks in the Tweets below:

LG confirmed on February 7 that the LG G8 will definitely launch at MWC 2019 later this month, and the South Korean firm has also released a teaser for the event − called ‘LG Premiere’. The video is only 13 seconds long, but it’s safe to say those 13 seconds make a hell of an impact.

“Goodbye Touch,” the teaser proclaims, as a hand swipes right, then left, over a piece of paper. It then pushes the paper away. Then it swipes right again, for good measure. More on this further down the page.

We can expect a major announcement on February 24, a few days after the reveal of the Samsung Galaxy S10 and at a similar time to when we expect to see the Sony Xperia XZ4 and Huawei P30.

However, the firm says it is currently “collaborating with a variety of mobile operators” in Europe.

There’s little word yet on pricing, but we can’t imagine the LG G8 costing much more than £599, which is how much the G7 was available for at launch. 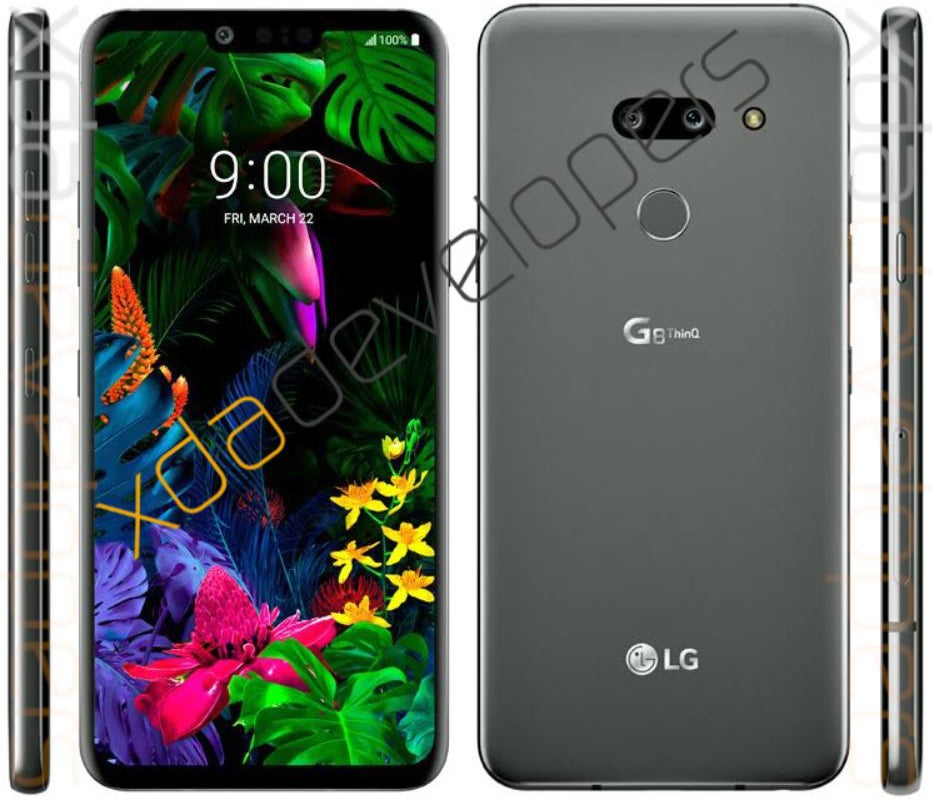 We’ve seen precious few legitimate-looking LG G8 leaks over the past few weeks, but an alleged press render (above) published by XDA Developers appears to show off the phone’s design in full.

As you can see, the handset looks a lot like the LG G7, thanks to that chunky notch, and slimline forehead and chin above and below the display. Inside that notch will be a single front-facing camera sensor, as well as what appear to be some extra hardware − possibly for face-scanning.

You’ll find the biggest visual differences between the LG G8 and its predecessor around the back. It appears that the G8 − like the G7 − will use a dual rear camera setup, but the sensors will sit side by side instead of being stacked on top of each other.

Below these is a fingerprint sensor, which all but confirms the G8 will not have an in-display scanner.

There has also been talk of LG supposedly debuting an intriguing new dual-screen smartphone. A source familiar with the company’s product development told Cnet that LG is bringing a phone with a detachable secondary screen to the MWC show floor.

Could this be the LG G8? It seems unlikely, but hear us out.

It’s unclear how exactly the implementation of this second display will take shape but there are two distinct directions the South Korean tech giant is likely to take.

In the same style as the recently-launched Vivo Nex Dual Display, LG might add a secondary screen that attaches to the back of the smartphone’s body. In the case of the Nex, that second panel is meant to accommodate selfies and video calls using the phone’s primary rear camera. And as it’s a touchscreen, it’s been seen as a means to augment mobile games – PS Vita style.

Alternatively, LG might try to cash in on the hype surrounding foldable smartphones, such as the upcoming Samsung Galaxy X and the recently released (but hilariously flawed) Royole FlexPai.

If this is the case, that secondary screen may perhaps attach to the phone’s primary display, effectively doubling the screen’s real estate. By extension, it could also feature some form of hinge mechanism to fold out of the way when not in use.

LG has confirmed that the G8 will feature a front-facing Time-of-Flight (ToF) camera sensor, which will serve multiple purposes.

Arguably the biggest of these is face unlock. LG says the ToF sensor will enable users to unlock the G8 with a quick scan of their face. The ToF sensor will have AR and VR applications too. thanks to depth sensing.

“While other 3D technologies utilize complex algorithms to calculate an object’s distance from the camera lens, the ToF image sensor chip delivers more accurate measurements by capturing infrared light as it is reflected off the subject,” LG explained in an early February post. “As a result, ToF is faster and more effective in ambient light, reducing the workload on the application processor thereby also reducing power consumption.”

The majority of LG G8 camera leaks to date have focused on the handset’s rear setup, which is expected to combine a pair of sensors sat side by side, instead of being stacked on top of each other, as they were on the G7. However, it appears the more interesting camera technology will sit on the front side of the phone. But it’s still not clear if the G8 will feature one on two front-facing camera sensors.

LG’s announcement continues: “And due to its fast response speed, ToF technology is widely used in various biometric authentication methods, such as face-recognition. What’s more, because ToF sees objects in 3D and is not affected by light from external sources, it delivers an excellent recognition rate, both indoors and out, ideal for implementation in augmented reality (AR) and virtual reality (VR) applications.”

The company has also revealed that the G8’s camera will be powered by the Infineon REAL3TM image sensor chip.

A leak captured by Dutch phone site Mobielkopen shows a battery with the LG branding and the model number of BL-T41.

Apparently, the cell was inspected by Anatel, Brazil’s national telecommunications agency, which reported a nominal battery capacity of 3400mAh. That’s a 13.3% increase on the LG G7, which packed a 3000mAh cell. 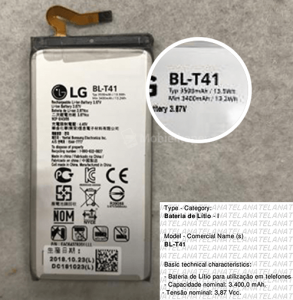 As mentioned above, LG G8 leaks have been fairly thin on the ground, but the company has said that it will be launching a 5G smartphone at MWC on February 24, that will “[reflect] the needs of customers who want to enjoy high-capacity contents steadily at a fast pace of 5G”.

It isn’t yet clear if this is the LG G8 or a completely separate device, but it sounds like a major launch regardless.

It will feature Qualcomm’s Snapdragon 855 processor and a 4000mAh battery, and LG has also thrown a new cooling system onboard, called Vapor Chamber. Everything here suggests this phone will be a powerhouse.

“The 5G Internet, which is several dozen times faster than 4G, can be enjoyed comfortably without slowing down or running even when running high-resolution games and large-capacity apps at the same time,” LG wrote in a blog post.

“LG Electronics has improved its stability by applying ‘Vapor Chamber’, which has more heat-proof performance than existing heat pipes. The surface area of the ‘Vapor Chamber’ is 2.7 times that of the LG V40 ThinQ heatpipe, and the amount of water contained is more than two times.

“Because the heat dissipation device is made of copper with high thermal conductivity, the larger the surface area, the quicker and widespread absorption of surrounding heat.”

Coming back to LG’s teaser, the top comment under the video (at the time of publication) probably sums up people’s feelings best. “Please don’t tell me you’re going to implement the palm swipes gestures from the Galaxy S4 into the next LG G8!” wrote Simon Winston. “That would be a horrible idea.”

It continues: “They’re not quite intuitive enough and sometimes actually make using the phone trickier than when they’re turned off. Within a few weeks we had disabled them all and we’re much happier with the experience the Galaxy S4 provides.”

While many of us have bad memories of gesture controls on smartphones, this is certainly one way of getting people talking again.

What are you hoping to see from LG at MWC 2019? Let us know on Twitter @TrustedReviews.