In recent days, we’ve seen a flurry of reports claiming the LG G5 is built from plastic, despite LG marketing the handset as sporting a metal unibody.

LG has released a statement confirming “unequivocally” that the LG G5 unibody casing is built from aluminium.

The handset’s design first came into question when YouTuber JerryRigEverything released a video where he scratched off the outer layer of the handset, revealing what looks like plastic.

But LG completely denies that its new flagship smartphone is built from anything other than metal.

“Contrary to erroneous reports online that the LG G5 body is composed of plastic, LG would like to state unequivocally that the uni-body casing of the G5 is composed of a special aluminium alloy, LM201,” writes LG.

According to LG, the LM201 alloy was built in partnership with the Korea Institute of Industrial Technology. It was intended for use in high-end sports cars, aircraft, and consumer electronics.

The South Korean tech giant says that LM201 was designed for “durability, rigidity, and lightness”, making it ideal for use in a smartphone. 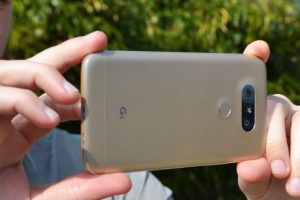 The LG G5, as pictured from the rear

But why the confusion if the LG G5 is obviously made of metal? Well if you scratch the handset hard enough, you can remove the pigment layer to reveal a primer coating that looks a lot like plastic.

“After the die-casting is complete, the insulating antenna slit is applied directly to the aluminium casing followed by a coating of primer which provides additional insulation and enhances the surface profile for the ‘microdizing’ process, where pigment containing tiny metal particles is applied directly to the primer to provider a smooth and durable finish,” explains LG.

The company continues: “While both anodized aluminium and microdised aluminium will scratch if enough pressure is applied, in the case of the G5 the grey primer beneath the pigment layer may be mistaken for plastic when the colouring is scratched off.”

LG adds: “We want to reassure our customers that the uni-body of the LG G5 is advanced aluminium alloy, not plastic.”

So there you have it. The phone is built from metal, but is layered with pigments and primers, creating the illusion of a plastic finish.

Check out our LG G5 hands-on video below:

Do you think LG has messed up its phone design, or are people being too nitpicky? Let us know in the comments.