There’s been a lot of talk about foldable displays this year, as several patents featuring the technology have emerged, but it seems there’s some significant developments going on behind the scenes.

That is, if a report from Korea’s ETNews is to be believed. The report claims LG Display has partnered with outside companies including Apple, Google, and Microsoft, to supply those firms with foldable OLED screens.

LG’s display division is said to be “developing ‘out-foldable’ displays for smartphones” – technology which will apparently be used on phones for the three tech giants.

It follows a report from July which claimed LG was looking to invest $1.75 billion in the foldable OLED market, with the new report stating the company will begin mass-producing the foldable handsets in 2018.

Though LG has shown off prototypes at tech shows in the past, the new report claims it has developed a new prototype with a ‘significantly high’ technical level – suggesting the latest concepts bring the technology much closer to consumer product level.

ETNews also says Apple could introduce iPhones with flexible OLEDs in 2017, though most reports claim at least one of the iPhone 8 models will arrive with a non-flexible full-face screen that does away with the home button. 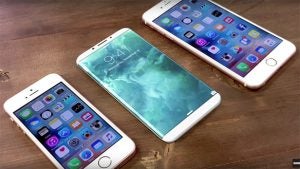 Apple is said to be working on three new models for the iPhone 8, though flexible OLED seems unlikely

Samsung, thought to be the other big player in the nascent flexible OLED market, is said to be developing its version of the technology entirely in-house, instead of taking the route LG has reportedly taken by partnering with outside companies.

Last week another report from ETNews claimed Samsung was working on two foldable phones – one with two screens either side of a hinge, and another model with a fully flexible OLED display that would be released once the company gauged conumer response to the first model.

Microsoft is also said to be considering flexible display tech for a Surface device, which could be the as yet unconfirmed Surface Phone.

As with the rest of these claims, however, this is yet to be confirmed. None of the report’s statements have been verified as legitimate, and LG has not given away any details about its flexible OLED display developments recently.

But if LG has partnered with outside companies, it could be a big step in bringing the technology to the mainstream, so we’re hoping ETNews is on the money with this one.

Let us know what you make of the report in the comments.