The TrustedReviews team is live at the LG press conference out at CES 2016 in Las Vegas.

Dr Skott Ahn, CTO of LG Electronics, kicked off proceedings by talking about the plans for the future.

The LG head described how the company would be focusing on cars, IoT, and OLED TVs in 2016 – no big surprise there. 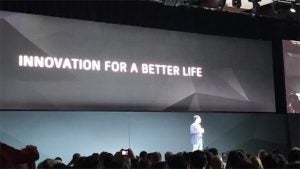 Cars of the future

“Why is LG suddenly interested in cars? Because the amount of time we spend in cars continues to increase,” explains Ahn.

The CTO talked up a 43-inch panoramic information display that is integrated with the windscreens of cars of the future.

He also explained how LG would be partnering with a number of automotive
companies in 2016, including Google, famous in the sector for its
self-driving car efforts. 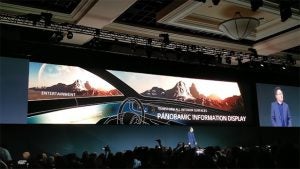 LG then brought Gayathri Rajan, VP of Product Management at Google, onto stage to talk about the Internet of Things.

“Technology will recede into the background,” explains Rajan, describing how technology will eventually work in more subtle ways.

“Devices must be able to communicate with each other, regardless of brand,” she continues, revealing Google’s interest in wide, open platforms for the IoT. 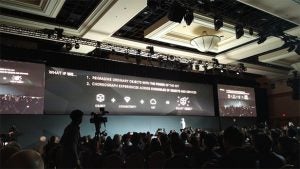 LG spent some time talking about LG Signature, the
new design aesthetic that will work across several LG products – the
company showed off a fridge, TV, and washing machine specifically. 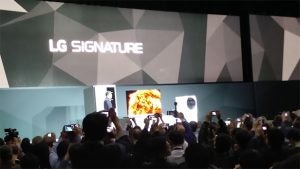 Valeur,
President of David Lewis Designer, then came out on stage to talk about
his collaboration with LG for the Signature aesthetic.

“We
thought to meet the most pressing needs of the consumers,” Valeur
explains. “I had one goal in my mind: That was to make a better advanced
product to appear more intuitive.”

LG used the press conference to show off the very top-end of its TV line-up.

That comes in the form of the LG G6 and LG E6 ranges, which take shape as eight different TV models.

They ship in varying flat and curved configurations – an LG spokesperson recently told TrustedReviews that sales of flat screens are increasingly outperforming curved ones. 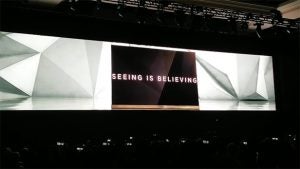 He continues: “By upping our OLED TV game every year, we are driving innovation in the TV space so that more consumers will see and hear about the benefits of owning an OLED TV.”

Kwon adds: “We think 2016 will be a game changing year for this category.”

What’s really exciting about the TVs is their incredibly svelte design. Remember Sony’s 4mm panel from last year? Forget about it. LG is pushing a 2.57mm panel – that’s one-tenth of an inch.

The company described the TV as being as thin as four stacked credit cards – that’s a world first.

This slick design is courtesy of the new LG Signature design aesthetic, which runs across a number of LG verticals like TVs and home appliances. 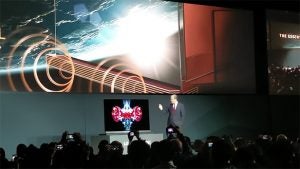 Of course, the TVs also ship with the usual 2016-ready features like 4K UHD resolution and HDR capability.

And because they’re OLED, you’ll be witnessing infinitely deep blacks from the comfort of your living room chair.

The UHD Alliance also confirmed that the new LG Signature OLED TVs are Ultra HD Premium certified, which makes the models amongst the first in the industry to achieve such a rating.

LG also confirmed it is working with Amazon, Netflix, and YouTube, to deliver 4K HDR content through the webOS 3.0 platform.

An LG spokesperson confirmed to TrustedReviews that pricing would fall below $10,000.

Next up are the Super UHD TVs – not as pricy as the OLED kit, but by no means lacking in the image quality department.

The Super UHD line-up is a new range from LG, a premium line-up of 4K panels debuted at this year’s CES 2016 tradeshow. 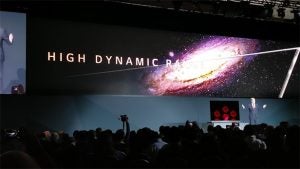 The Super UHD line-up for the US includes four series:

What’s exciting about the UH9800 is that it’s an 8K model. Yes, that’s right – double the resolution of 4K UHD.

Unfortunately, there isn’t really anything in the way of 8K content out there to make such a purchase recommendable.

Then again, you can at least brag to your mates that you have a near-100-inch 8K TV, and to some, that’s probably worth the purchase.

Kwon continues: “We are the only company with a dual strategy focused on both OLED and UHD TV technologies and this is proof that we’re committing to delivering the most advanced picture quality and home entertainment innovations to consumers around the world.”

All of the TVs run on the latest generation of LG’s webOS Smart TV platform.

WebOS 3.0 brings new features that make finding and switching between LG’s expanded content options quicker than ever before.

LG spent some time talking about the Signature-inspired home appliances, starting off with the new washing machine.

The washer tub has a 14.6-inch easy-loading door, and an ergonomic push-open design.

Noise has also been reduced, with washing maxing out at 48dB, and drying topping at 68dB.

There’s also a 25-year warranty with every Signature washing machine, which LG claims is an industry-first.

It’s a smart washer, so you can be updated on when your wash is finished, as well as metrics like water and electricity used, all through your smartphone. 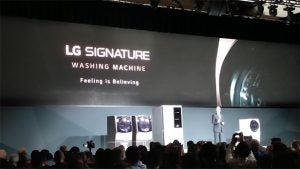 The LG Signature refrigerator was also fairly slick-looking, showcasing a glowing door window that lights up when you knock on the outside. It’s basically an easy way to check out the innards of your fridge without actually opening the door. Welcome to the future, folks.

There’s also an auto-door function for even easier access. Put your foot by the motion sensor at the bottom of the fridge, and it will activate the door hinge – great for when you’re carrying a heap of groceries.

Unfortunately, none of the Signature appliances will be landing in the UK.

Let us know what you want to see in the comments