Samsung and LG are two of the biggest innovators in display tech right now, and they each have a flagship TV. Both of them are excellent in their own ways, so it’s time for a head to head: LG C8 vs Samsung Q9FN.

The Samsung Q9FN is a backlit LCD with about 480 dimming zones and a peak brightness of over 2000 nits. The LG C8 is an OLED whose brightness never breaks the 1000-nit barrier, but it has per-pixel lighting precision, which helps with contrast.

For the most part, this is a clear victory for the Samsung QLED TV. Bright HDR scenes, such as the exterior real-world sequences in Ready Player One, or Mad Max: Fury Road’s daylight desert sequences, blaze off the screen with an intensity that really feels like daylight. This overwhelmingly bright sort of HDR image looks significantly less intense on the OLED set.

Bear in mind though that the extent of the difference in brightness between the two screens is pretty much negated with standard dynamic range playback. It also depends on how brightly an HDR source was mastered.

Also, while the Samsung QLED model wins comfortably on brightness with mostly bright HDR content, there is an exception to the brightness ‘rule’, which is covered in the next Contrast section.

This is an interesting one. The QLED set can, thanks to its direct lighting system, deliver ne 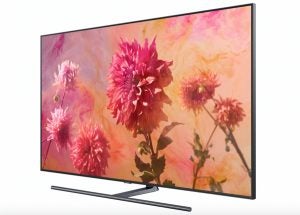 ar-perfect black levels as well as brightness peaks that are more than twice as high as the OLED’s. The issue is that even with its excellent local dimming system, the QLED set can’t deliver both those blacks and those whites simultaneously as well as LG’s OLED can.

Thanks to its per-pixel light control, OLED can maintain inky blacks just a pixel away from bright whites and colours. There’s no need to compromise one to achieve the other.

So while the LG C8 might not hit the same light peaks, shots containing a strong mix of dark and light content look punchier and more dynamic on the LG OLED. In fact, really extreme content, such as candles or street lights appearing against dark backdrops, look almost luminous on the OLED, whereas they can look really quite muted on the QLED.

The difference in the way the QLED and OLED screens deliver their light also gives a clear advantage to the OLED when it comes to shadow detail in very dark parts of the picture.

For instance, as Patrick Hockstetter searches the sewers in It, there’s a shot of him illuminated by a cigarette lighter against an extremely dark backdrop.

On the OLED, you can still make out subtle details of brickwork and reflections in the dark area around him. On the QLED, much of this detail is lost due to the way the TV has to take so much light out of the darkest parts of the picture to maintain its class-leading (for LCD) deep black levels.

Related: What is QLED? 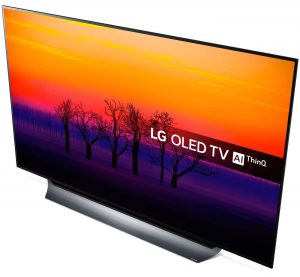 This, again, is an interesting one. The QLED undoubtedly has things sewn up when it comes to colour volume, getting more out of the potential of 4K Blu-ray’s HDR and wide colour technologies to make the action look more ‘real world’.

The QLED TV does so well here because a) it can go significantly brighter than the OLED, and so can deliver more of the visible colour volume spectrum, and b) it can deliver its brightest tones without colours starting to look forced and unnatural.

But the OLED can make a mark with colour during dark scenes. The way the QLED TV needs to dim down its lights to deliver good black levels means colours in dark areas can look flatter – sometimes much flatter – than they do on the OLED.

LG’s OLED technology easily takes this one, as you’d expect. With Samsung’s latest QLED TVs, you can’t watch them from an angle of more than 30 degrees off axis without colour tones shifting and contrast reducing. You see more backlight blooming around bright objects when viewing from an angle, too.

The OLED TVs can be watched from pretty much right angles with no colour desaturation or contrast reduction. 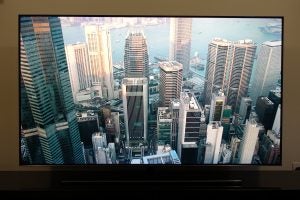 With the QLED and OLED TVs both carrying the same ‘4K’ number of pixels, you would expect things to be equal here. But a combination of processing differences and, perhaps, the colour volume/shadow detail performance does deliver a difference.

Oddly, the E8 OLED can look slightly crisper with foregrounded content, but the Q9FN tends to look sharper across the whole image, including backgrounds. Especially with shots that contain a large depth of field.

The Samsung also retains more detail in the very brightest parts of HDR pictures. This is because its extra brightness helps it avoid ‘clipping’, where really peak parts of HDR images that are mastered more brightly than a TV can manage may look ‘bleached out’.

The latest LG OLEDs fare much better in this respect than previous generations, and at the moment, HDR content that’s mastered to HDR levels way beyond the capabilities of the latest OLED TVs is relatively rare. But this peak light detailing is a key QLED advantage nonetheless.

On paper, LG’s OLED TVs should have the edge here. The way LCD TVs work, with moving liquid crystals, means they take longer to react to changes in the image than OLEDs, which essentially just have to adjust the voltage going into each OLED pixel.

In reality, though, once video processing has been added to the equation, things aren’t so clear-cut with our two head-to-head models. There’s inherently more judder in the OLED presentation, but slightly more blurring in the QLED presentation. And the processing LG and Samsung offer to correct for these issues can cause broadly similar amounts of unwanted digital side effects. So overall, this section is probably a low-scoring draw. 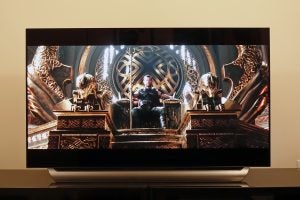 We couldn’t test this in our head to head, as even if screen burn/image retention were to occur at all on the LG C8, it would take far longer than we had available for our tests.

The pricing is close, but LG currently has the upper hand, and for many that will be the deciding factor.