At CES 2013 Lenovo, officially announced the nifty ThinkPad Helix, an 11.6-inch convertible laptop/tablet with specs that put it firmly in laptop land – but weight and battery life more akin to an Atom tablet.

Lenovo is one of the largest PC and laptop makers in the world, and is constantly innovating in the Windows 8 convertible field. The Helix joins the Lenovo ThinkPad Twist and the Yoga 13-inch in Lenovo’s high-end hybrid stable of machines offering Intel Core-i processors, and throws in Wacom stylus support too.

After a Windows 8 convertible but the Helix not your thing? Have a look at our Best Windows 8 Laptops, Tablets, Convertibles and PCs roundup

Lenovo ThinkPad Helix Specs and Connectivity
The Helix Windows 8 tablet/laptop certainly brings specs to the table that no Ultrabook would be ashamed of. It runs a full-fat Intel 3rd-gen Ivy Bridge processor up to Core i7 with configurable memory of as much as 8GB and up to a 256GB SSD for storage. The only potential weak point is its integrated Intel HD 4000 graphics.

Connectivity on this hybrid is also more than up to scratch, with niceties like mini DisplayPort, Gigabit Ethernet and USB 3.0 on the ports side, while Bluetooth, NFC and optional 4G/mobile broadband covers wireless duties with aplomb. 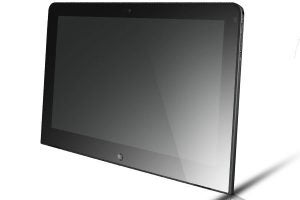 The Lenovo ThinkPad Helix shows it all off on a glorious 11.6-inch 1080p (Full HD) IPS screen that offers 10-finger multi-touch and is protected against scrapes and scratches by Gorilla glass. As far as we’re concerned this is the ideal size and resolution for a hybrid, though as a tablet its 16:9 aspect ratio can be a little awkward.

The ThinkPad Helix’s dock offers a full-size keyboard which, given the usual ThinkPad standards, will be a pleasure to type on, and a larger-than-ever glass touchpad integrates the point stick’s buttons for the first time. This dock extends the tablet’s connectivity and sports a secondary battery, doubling the tablet’s 5 hours estimate to a whopping 10 hours – one of the best potential results we’ve yet seen from a convertible packing this much punch.

Uniquely, you can turn the tablet front-to-back (180 degrees) and still attach it to the keyboard base, giving you a kind of stand that’s great for presentations. Folded down it also lets you use the Lenovo ThinkPad Helix in ‘tablet mode’ with its base attached, handy if the slate itself is running out of juice. Lenovo calls this flexible system “Rip and Flip”, which we can’t say sounds very pleasant or reassuring. 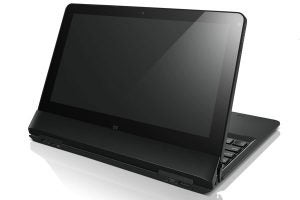 Still, as Windows 8 convertibles go, the Lenovo ThinkPad Helix seems to tick all the right boxes. It even comes with a Wacom stylus which supports 1,024 levels of pressure for arty types, designers or those who like to take handwritten notes. When not in use, the pen tucks away neatly in a provided slot in the tablet part of the Helix.

Lenovo ThinkPad Helix UK Price and Availability
The one down-side to the ThinkPad Helix is that it doesn’t come cheap, though it would hardly be fair to expect all this goodness to go easy on your wallet. Lenovo has confirmed a US price of $1,500 for the base configuration of its newest convertible, meaning we’ll likely see the Helix on this side of the Atlantic for just over £1,000 when it becomes available here at the end of February.