I’ve been super hyped about Legend of Zelda: Breath of the Wild. So hyped that I put money down for the super fancy ‘Limited Edition’ as soon as pre-orders opened. I didn’t even know what the package contained, I just knew I wanted it.

Well it’s just arrived, so let’s dig in – with pictures. 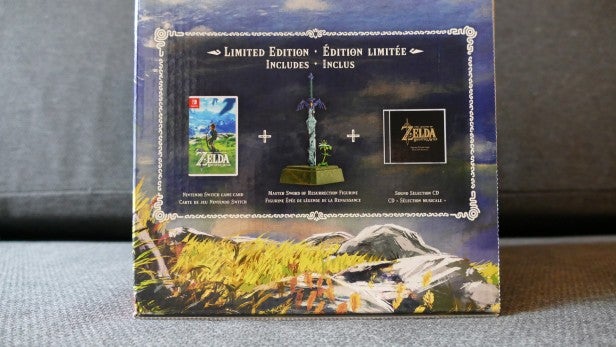 The box is massive. At 33x20x17.5cm, it’s bigger than the box the Nintendo Switch console comes in. A shot on the side of the box confirms what you get with the Limited Edition: the game, the soundtrack, and a ‘Master Sword of Resurrection Figurine’. Figurine? It’s a sword, not a person, so I’m going to call it a statue. 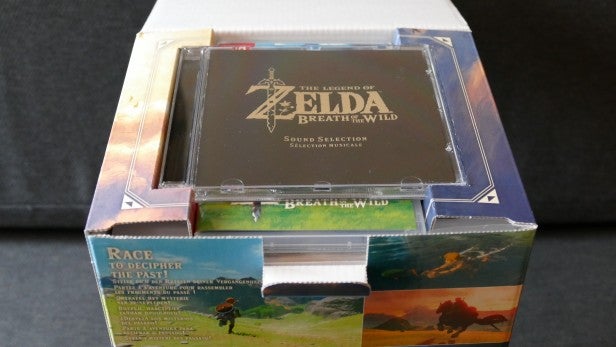 The first thing you see is the CD. Black background with gold font – I was hoping for more interesting art work. The inside is better, though, and you get 24 tracks, which is good. A quick listen confirms it is a good recording, properly arranged. A part of me wishes there were chip tunes on here, but trust me, this thing will make your morning commute sufficiently epic. 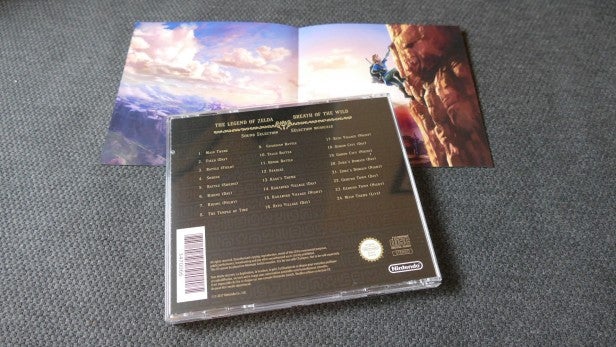 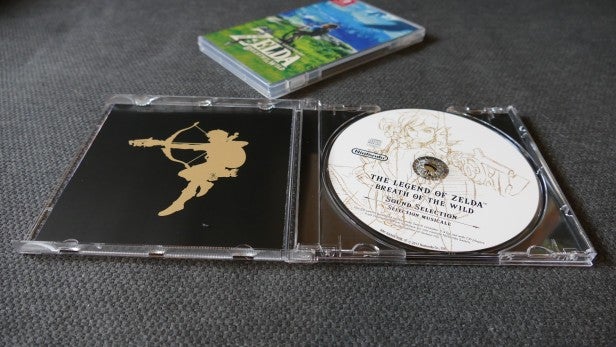 Underneath the soundtrack is the box you get with the standard edition of Zelda: BotW. Nothing fancy about it, it’s just a game case with the game cartridge inside. I can confirm the cartridge tastes horrible. I had to chew gum for an hour to get rid of it. 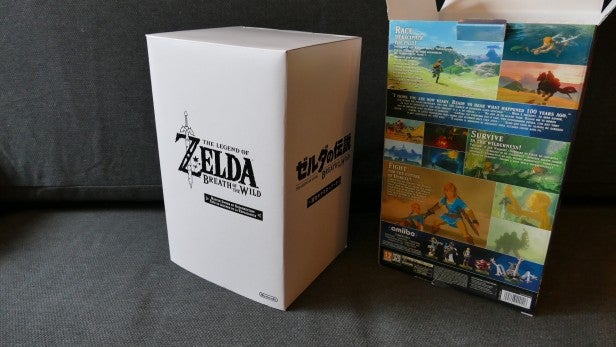 Get past the game box and you’ll find… another box. Plain white, with black lettering. There’s something I really like about seeing it in Japanese too. 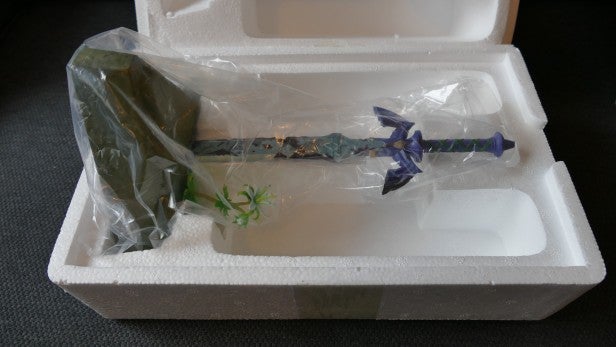 Inside is a lot of polystyrene and…*da-da-da-DAAAAA*… the Master Sword. There’s no ominous glow so I opened the box with my Philips Hue lights set to yellow. 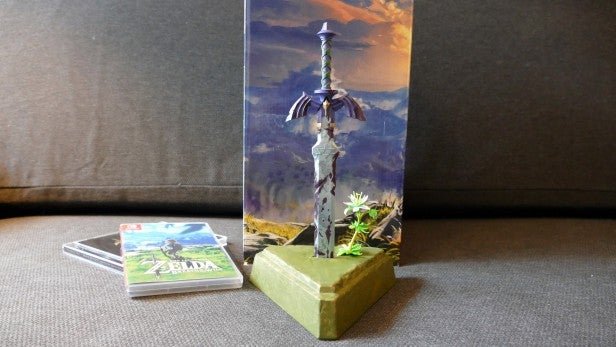 So here it is. It’s 26cm tall and weighs 642g – a good paperweight. I can’t work out exactly what the materials are. The weight and solidity of the base leads me to think it’s metal. The sword flexes a little and is slightly cool to the touch, so I figure metallic paint over plastic. The flower is definitely plastic, but it looks realistic enough. 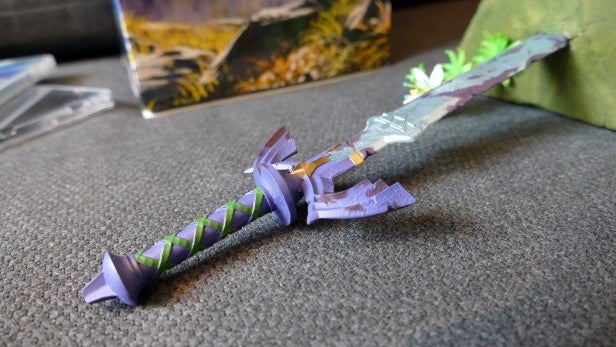 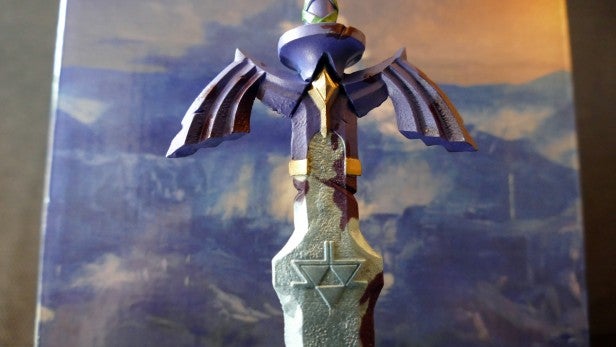 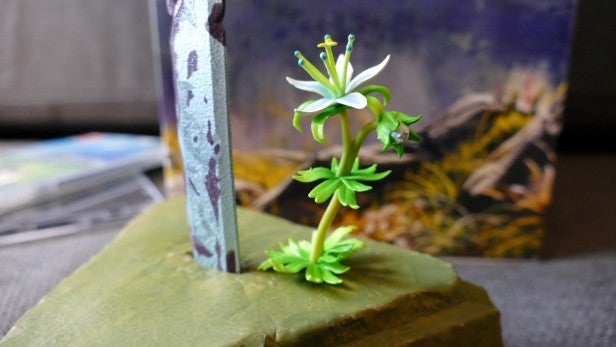 They’ve done a great job with the statue. It looks really nice next to my TV. The textures look great: the sword is clearly supposed to be a bit beaten up, but the non-rusty parts have a nice shine to them. As limited edition game tat goes, this is one of the best statues I’ve got my hands on. 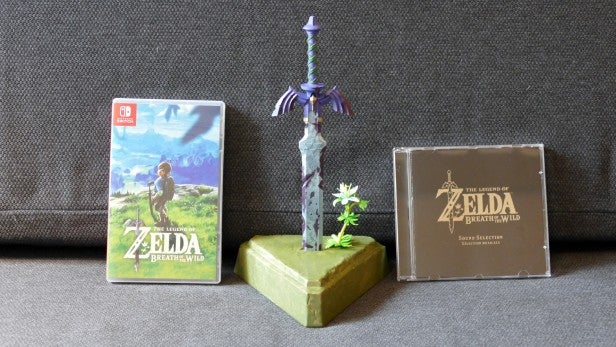 Here’s everything in the box. 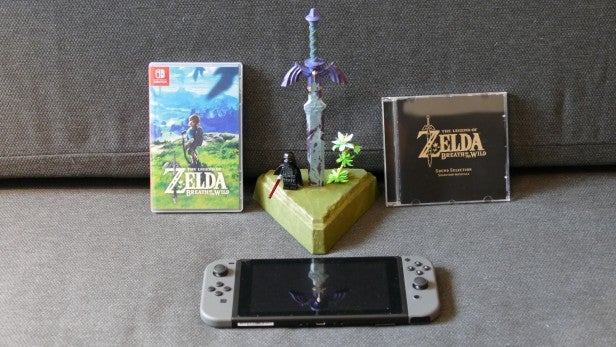 Here’s everything in the box, with the Switch console and Lego Darth Vader for scale.

Should you buy the Limited Edition of Zelda: BotW? Well that depends. It’s not cheap, so the question is how big a Zelda fan are you? The standard edition has an RRP of £60, but it can be found for £50 quite easily. The limited edition cost me £88. So that’s an extra £38 (or £28) for a statue and a CD.

Is it worth it? If you’re a casual fan who simply quite enjoys Zelda sometimes, then it’s probably not great value. I’m also a little mad at Nintendo, because you get better special editions outside of Europe. In the US, the Master Edition gets you a lovely Zelda-themed case for the Switch console, along with other collectables such as a map and a gold coin.

For hardcore fans, however, the limited edition is a treat. I love the music, and I love the statue. But then again, I’m also an unashamed Zelda nut, with multiple T-shirts saying as much. The question is, are you the type who has a full-size Master Sword under the bed?

What do you think of the Limited Edition goodies?