L-Acoustics has been on the bleeding edge of tech in the professional audio industry for over 30 years, and yet it’s unlikely that you’d have heard the name before.

L-Acoustics is a French company based in Marcoussis (with various offices around the world), supplying its audio expertise to countless art centres, sport facilities, and nightclubs. You’d have heard their work from the rafters of prestigious concert halls; or seen their speakers used by the best DJs at music festivals like Coachella, and by some of the biggest music artists during their tours.

We went down to their UK offices in Highgate, London – home of the L-ISA project – to get the lowdown on who’s behind L-Acoustics Creations and why you’ll likely be hearing more about them in the future. 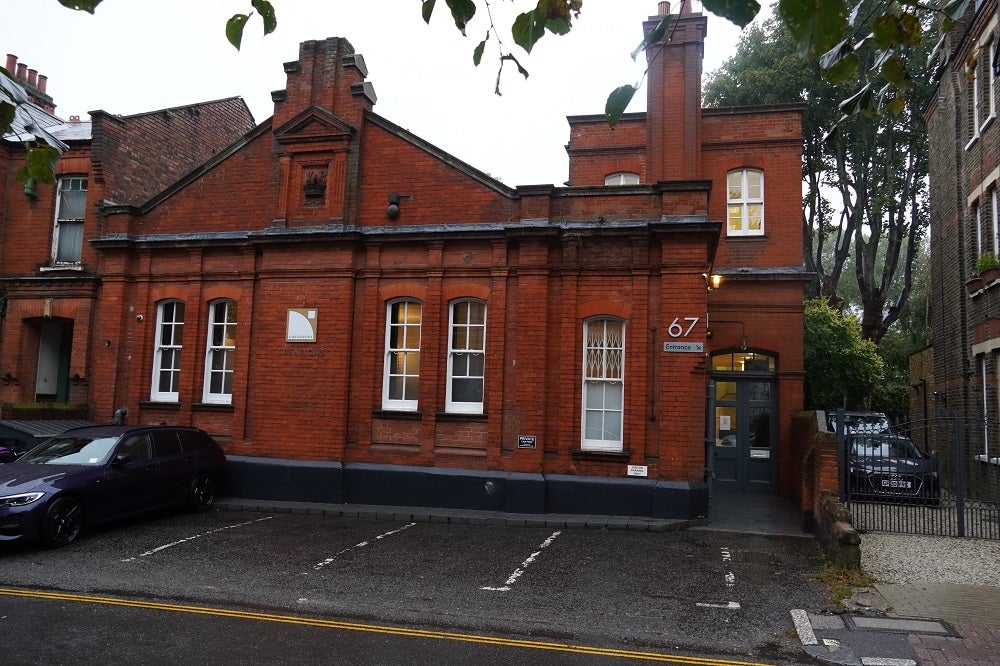 It started on a farm outside Paris

Founded in 1984 by Dr Christian Heil (the doctorate is in molecular physics), he looked to take the knowledge he’d gained in physics and apply it to music. He knocked on the doors of French loudspeaker companies (such as Focal) for a job – but found his advances rebuffed. So he decided to do it himself.

Building loudspeaker cabinets on a farm outside Paris, he eventually developed the line-array speaker technology that graces performance venues the world over and remains an industry standard.

The main focus for the company’s operations became touring and festivals, with artists such as the Red Hot Chili Peppers, The Foo Fighters, Adele and more relying on L-Acoustics for their sound. During our tour, Kevin Groom (AV Application Engineer) mentions that “out of the twenty largest music festivals globally, L-Acoustics does the sound for 40% of them”, and that equals the total of the following four manufacturers. They are a giant in the field of professional audio.

Which brings us to our visit to the L-Acoustics office. Having become a giant in the professional audio market, they advanced into the fixed installations market, whether that be cruise liners, theatres and nightclubs, and now have their eyes fixed on the residential market with its Archipel Sound Systems – a mix of desktop, home cinema and indoor-outdoor set-ups.

As Nick Fichte, Business Manager for L-Acoustics Creation tells us, they’ve taken their professional “ruggedised products” and put them into “a home environment targeting music lovers”.

The Fiji 2.1 system is the entry level package featuring two X4i loudspeakers and a 12-inch Syva subwoofer, driven by their LA2Xi amplifier. Despite its entry-level status, the Fiji system costs €7550. Unlike traditional stereo speaker set-ups where you’d have to sit several metres away, the sweet spot for the Fiji is just 1.3 metres. 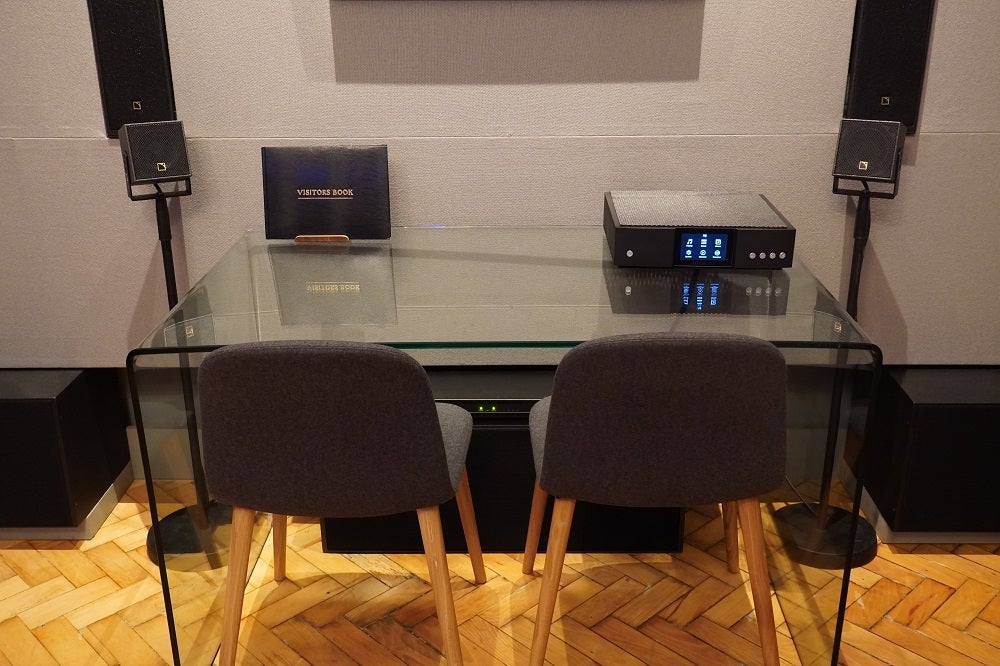 And what a sweet spot it is. Even from 1.3m away, the clarity and stereo imaging is fantastic, and the bass delivered by the Syva subwoofer travels straight through the chair we’re sitting on and into our body. This is audio that you don’t just hear, you feel it too. You’ll want to hear your music collection played through this system, and loudly at that. It’s a fearsome sound, even at 80% volume.

Next up is the Ocean Sound System that’s enabled by the L-ISA Hyperreal Sound technology (L-ISA referring to Immersive Sound Art). Made up of speakers dotted across the four walls of the room in a 23.1 speaker configuration it features an absurd number of Syva subwoofers (of different types), as well as several overhead speakers for a total power output of 48,000 watts. 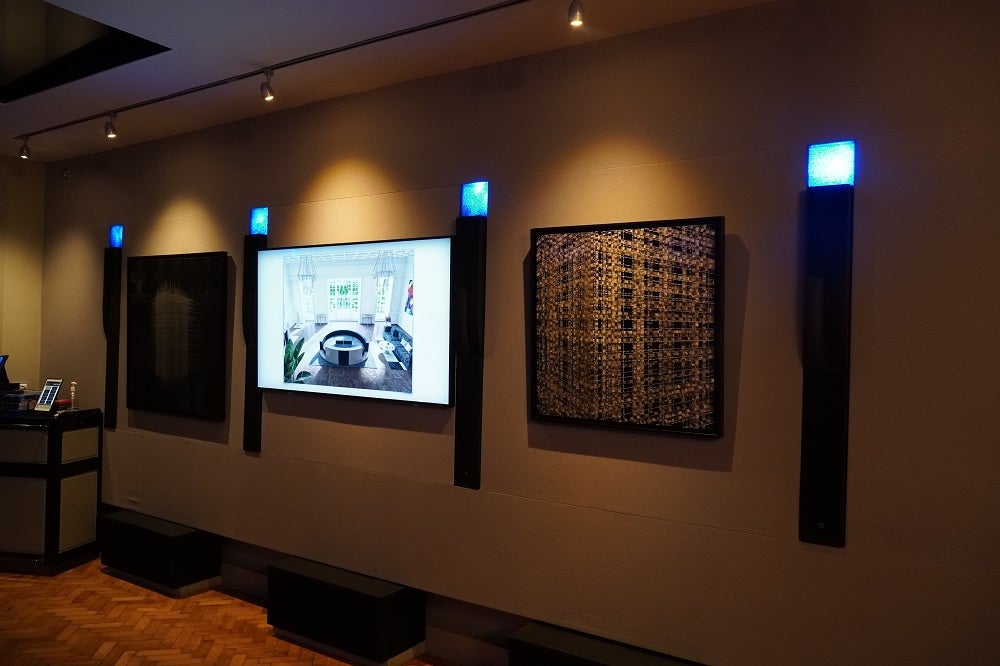 The idea here is that the listener is enveloped in what L-Acoustics terms as a ‘sound space’. As Fichte elaborates, “the difference of a sound space from what we then call a sound system is with the sound space you don’t hear where the sound is coming from… you’re just immersed in sound.”

And you do, in a sense, forget about where it’s coming from and treat it as one big sound, as if an orchestra is playing right in front of you and you’re standing in the position of the conductor being hit by a wave of sound. It’s big, powerful and full of raw energy, producing the sensation of live music but in a home setting. 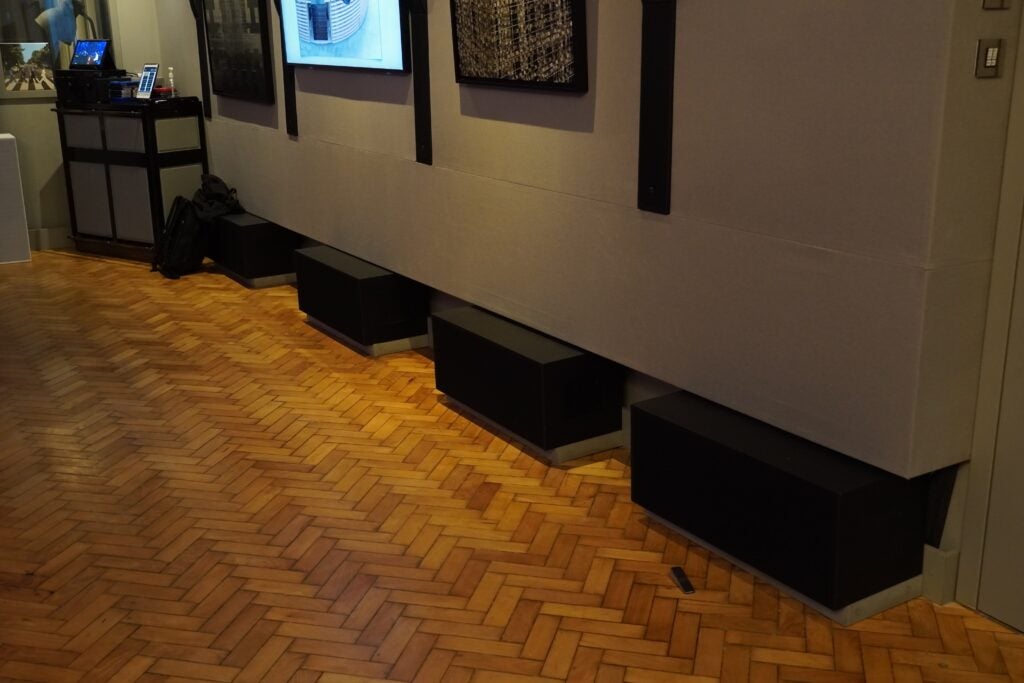 It’s not a sofa, it’s a speaker system

It’s pointed out to Trusted that the massive sofa towards the end of the room is not just a very comfortable and swish-looking bed/sofa combo, but a speaker system that can rotate 360 degrees. 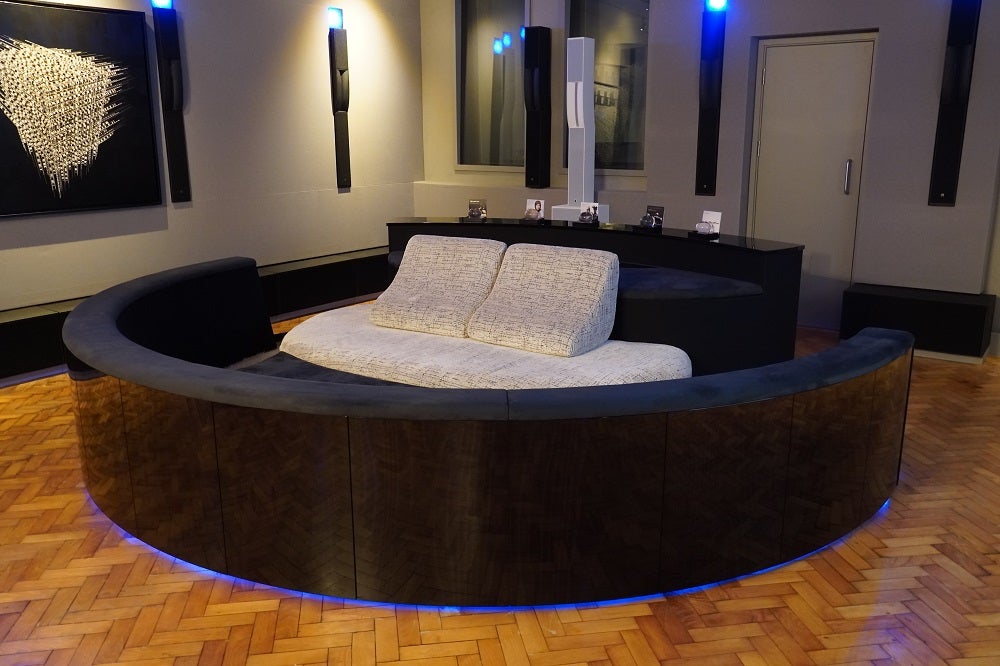 If you have to ask how much it costs, then you probably can’t afford the Island

It’s become pertinently clear that L-Acoustics’ offerings are somewhat above our salary (apparently Aerosmith’s Steven Tyler has sampled The Island and wants one). Intended for relaxation or small gatherings, hidden in the structure of the Island is an 18.1 speaker configuration with music played through L Acoustics’ proprietary Bubble Deck. The deck holds ‘Bubble’ recordings that have been certified in L-Acoustics’ BluSpace standard, which aims to offer the highest reproduction of music playback. 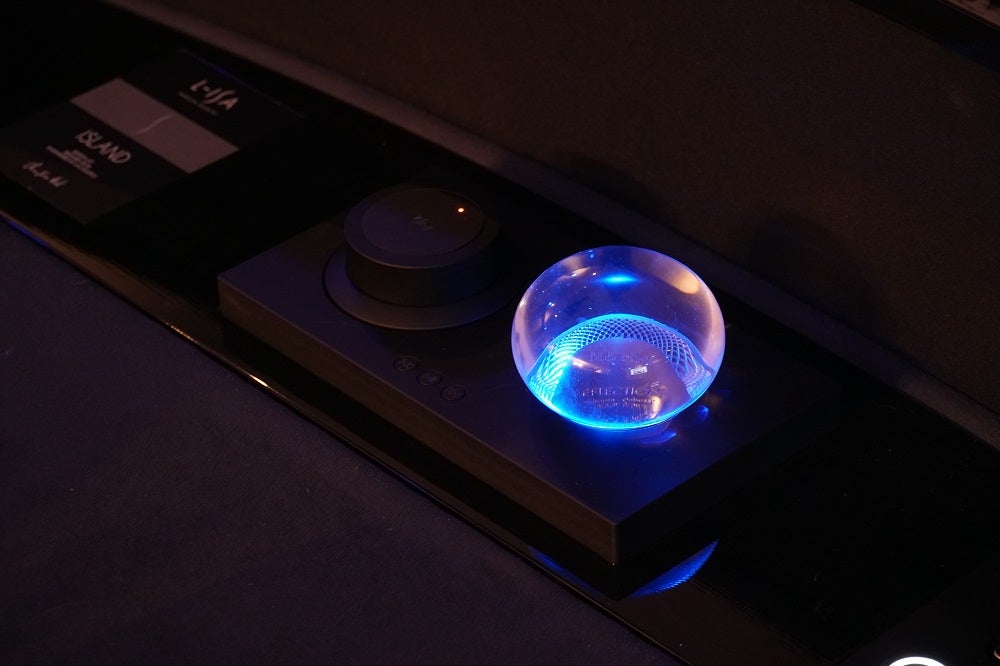 The BluSpace orb with engraved music

If this all sounds bizarre, well, it is a bit weird and futuristic. Recordings (or DVDs, Blu-rays and even streaming services) can be engraved into an orb at 24-bit 96kHz, and they’re read by a Bubble Deck that controls playback. It’ll handle other immersive formats such as Dolby Atmos, DTS:X and Auro 3D if the BluSpace system is partnered by a third-party AV processor, but not even those formats can’t meet the full resolution and dynamics of the BluSpace standard. 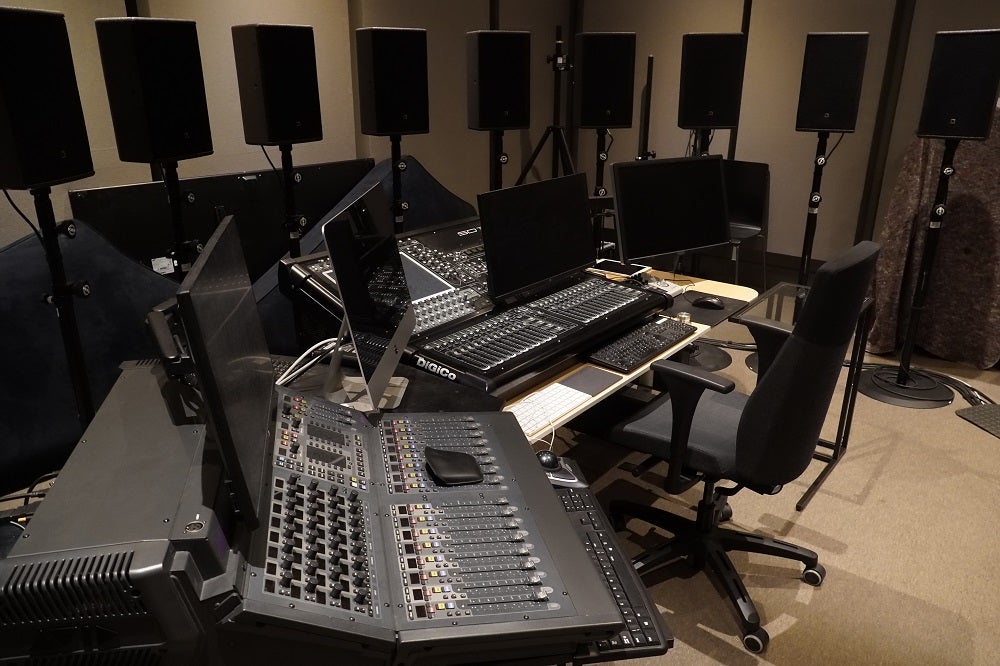 Just 15 minutes travel from Soho, artists will pop up to hear their music mixed in immersive formats at the L-ISA office

The Island is a bit mad in a very enjoyable sense. The idea of a speaker system where you can sit and be surrounded by audio is immersive and amusing (especially when the bass starts to kick in), and watching Ready Player One in Atmos (because of course there’s a retractable projector screen that beckons from the ceiling), is about as good an experience as you’ll find outside of the cinema.

L-Acoustics’ products aren’t made for the ordinary person, but the company’s set a high bar to reach in bringing the experience of live music to the home. Having seen (and heard) the strides that are currently being made, L-Acoustics could be setting the standard for music in the home just like it did in the professional area.