The first full trailer for Jurassic World: Fallen Kingdom finally dropped on Thursday night. Get your first look at the fifth installment of the ‘Jurassic’ franchise, and learn the release date, cast, plot and more.

2015’s Jurassic World was an uproariously fun return to form for the dinosaur movie franchise, based on Michael Cricton’s seminal science-fiction novel. Audiences and critics agreed it was easily the best installment since 1993’s original.

If you loved this action-packed romp as much as we did, we’ve got some great news: A sequel is coming next year, featuring the return of a franchise hero.

Better still, Universal Pictures just dropped the first full trailer for Jurassic World: Fallen Kingdom, which arrives in cinemas next June. Here’s everything you need to know about the film thus far. 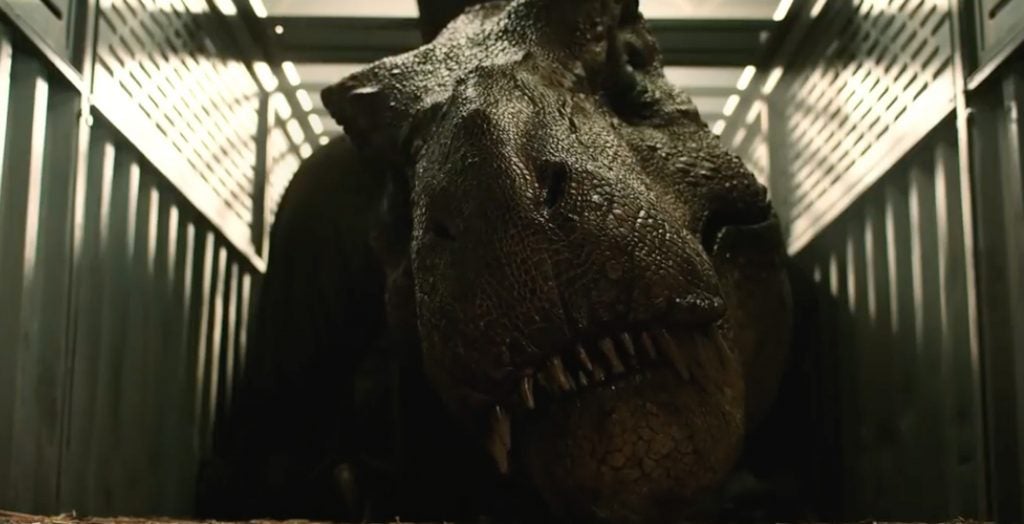 The first full trailer launched during an NFL game in the US on Thursday night, and here it is:

As you can see, since the end of Jurassic World, the dinosaurs have had the run of the abandoned park. Ironically, once again, a natural disaster has threatened them with extinction. In the midst of a volcanic eruption on Isla Nublar, former park manager Claire wants to rescue them and has enlisted raptor whistler Owen to help.

As well as the full trailer, Universal Pictures has been dropping brief teasers to get us hyped for the real thing. One includes Chris Pratt’s Owen training baby Blue the velociraptor. Another asks: “do you remember the first time you saw a dinosaur?” and ends with Dr. Malcom repeating his famous line “life finds a way.”

Chris Pratt is reprising his role as Owen Grady the dinosaur trainer, while Bryce Dallas Howard is back as (former) park executive Claire Dearing. However, the big news is unquestionably the return of Jeff Goldblum as cult favourite Dr. Ian Malcolm, who left the franchise after Jurassic Park: The Lost World.

We got our first look at Goldblum in a teaser featurette dropped on YouTube this week. “Here I am talking about dinosaurs again,” the mathematician says, in what appears to be some sort of government hearing into the disaster on Isla Nublar.

B.D. Wong is back as the sinister geneticist Dr. Henry Wu, while Toby Jones of The Detectorists fame continues his Hollywood hot streak in an as-yet-unannounced role.

J.A. Bayona (The Orphanage, A Monster Calls) is in the directors chair, while Steven Spielberg is an executive producer. Writers Colin Trevorrow and Derek Connolly are also back for the sequel.

[JURASSIC WORLD (2015) SPOILERS AHEAD] Jurassic World finally showcased the late Dr. Richard Hammond’s dream as reality. The park on Isla Nublar was open and business was booming. The newest attraction, a brand new species called Indominus Rex, created by splicing DNA samples, made the T-Rex look like an iguana.

However, as you can imagine, things do not go well. Indominus Rex escapes from its paddock after biting out its own location tracking chip and havoc ensues. Meanwhile, US military baddies think the best way to capture Indominus is to use the velociraptors specially-trained by Owen.

As if things couldn’t be any worse, park boss Claire Dearing’s two young nephews are lost in the wilderness with Indominus and a flock of pterosaurs on the loose.

Indominus is eventually conquered by a combination of the obedient raptors, the park’s old T-Rex and the monolithic Mosasaurus. The movie ends with scores dead and the park in ruins, but with Owen, Claire and the two young whippersnappers somehow still in one piece.

Entertainment Weekly has the scoop on the plot for Fallen Kingdom.

Naturally, following the evacuation of the island, the dinosaurs are now running the show. Sadly, they face extinction (again) thanks to the imminent threat of a volcanic eruption. This doesn’t sit well with Claire, the benevolent former park manager, who now wants to safeguard the animals’ future. She’s got her old flame Owen back to help too.

Bryce Dallas Howard, who plays her, said: “Claire’s founded an organization, Dinosaur Protection Group, and they’re finding a way to get these dinosaurs off the island. She reaches out to Owen Grady to let him know this is happening. It’s complicated. When you see them at the beginning of this story, you get caught up as to what’s going on, but it’s not what you would necessarily expect.”

Jurassic World: Fallen Kingdom will be released in the United States on June 22 2018, but the UK is getting it two weeks earlier, on June 8, according to IMdB.com. That’s just a few weeks shy of 25-years since Jurassic Park terrified audiences for the first time.

The film is likely to be one of the biggest summer blockbusters of the 2018. We’re hoping it’ll replicate the success of Jurassic World, as opposed to the utter dud that was The Lost World.

Do you think Jurassic Park: Fallen Kingdom can live up to Jurassic World and perhaps even Jurassic Park? Drop us a line @TrustedReviews on Twitter.