A poster warning parents about progams and tools kids might be using to engage in hacking has been met with mockery on social media.

The poster, designed to educate less-than-tech-literate parents, has been issued by the West Midlands Regional Organised Crime Unit (WMROCU) and lists a number of programs and tools commonly used for penetration testing and ethical hacking – alongside popular chat app Discord and the privacy-centric Tor Browser.

According to Gareth Illmann-Walker on Twitter, a self-described ‘White Hat open source geek’, the poster was distributed to local schools via Walsall Council. 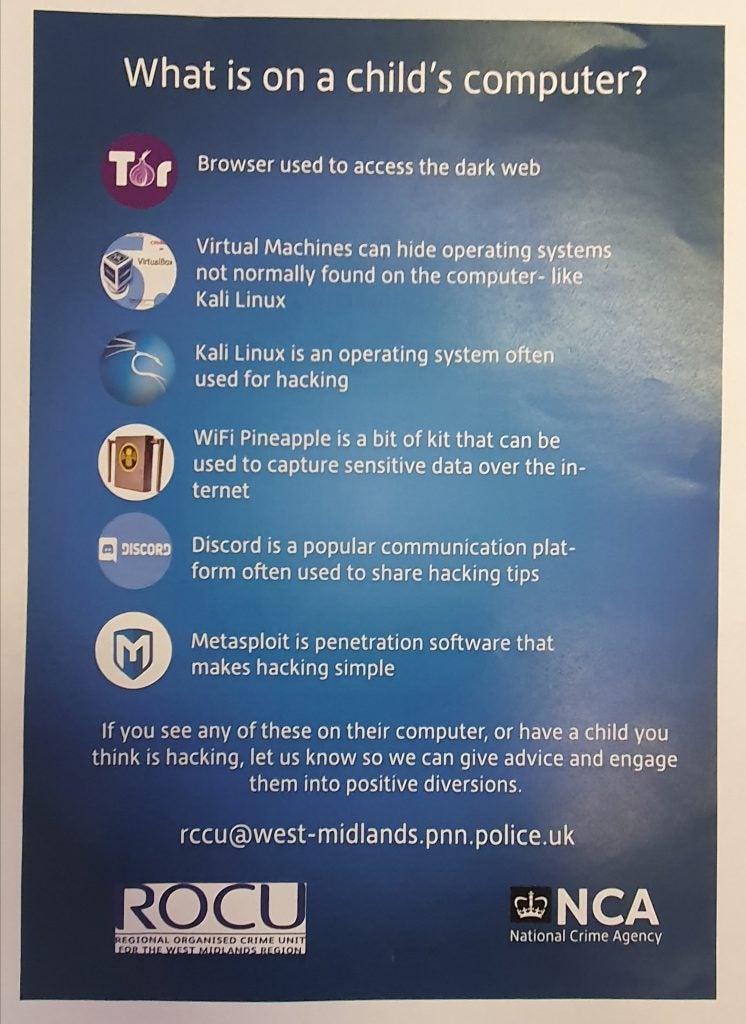 For the unfamiliar, the term ‘white hat hacker’ refers to someone who probes networks and systems for leaks with the intention of reporting it before something truly bad can happen. It is a worthy and occasionally lucrative pursuit. Black hats do the same thing, but for less than noble reasons.

While undoubtedly well-intentioned, the poster arguably alarms more than it informs, to the extent where the National Crime Agency (NCA) – whose logo appears on the poster – has publicly distanced itself from the campaign.

Via Twitter, the NCA said: “…the NCA was not involved in the production or release of this poster.”

“There are many tools which tech-savvy children use, some of which can be used for both legal & illegal purposes, so it is vital that parents and children know how these tools can be used safely.”

While Metasploit, Wi-Fi Pineapple and operating system Kali Linux can in theory be turned to unethical and illegal purposes, that is not their purpose – they’re officially to be used to scan for security vulnerabilities, simulate data gathering and network eavesdropping, so-called, man-in-the-middle attacks, and learn about security.

Similarly, Discord isn’t a hacking tool. It has been used by hackers to distribute malware in the past, but that doesn’t mean that it’s a tool for hacking any more than WhatsApp, Signal, or Facebook Messenger are.

Related: How to make a Discord Bot

Tor Browser is also not a hacking tool, though arguably, anyone engaging in unethical or illegal activity may wish to use it to evade detection from the authorities – perhaps why it’s top of the WMROCU’s naughty list.

Like the secure browsers and encrypted connections offered by most VPN providers, Tor Browser encrypts your traffic so that your ISP can’t see your HTTP requests.

Again, the presence of Tor Browser here is something of a mystery, as you might as well have TunnelBear, ExpressVPN or Private Internet Access in this rogue’s gallery, too.

While it is very easy to point and laugh at the slip-ups, WMROCU is correct to encourage parents to take an active role in the tech education of their children – they’ve perhaps gone a bit Sergeant Nicholas Angel where more of a PC Danny Butterman approach might have been better.

Trusted Reviews contacted Walsall Council for a statement, but did not receive a response at the time of publication.