Xiaomi will launch a series of “ecosystem products” at its live event tomorrow. Could we also be in for a surprise or two?

The company’s live stream begins at 8am ET – that’s 1pm BST here in Britain. You can tune in on YouTube, Facebook or Twitter. A simultaneous event will be taking place for German-speaking audiences.

We’re expecting to see the Mi Band 5 and the Mi TV Stick, but Xiaomi has also made mention of a surprise product that’s set to appear. 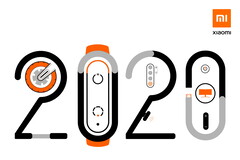 Steven Bai, the company’s Global Product Manager, replied to a post on Facebook, stating that there would be a “mysterious surprise” at the event.

There is some suggestion that the surprise product will be an exciting new smartphone from Xiaomi.

The event’s logo, pictured above, gives one or two clues for the themes that will be touched on during the event. Including entertainment streaming, (a TV is pictured,) and a phone’s camera array.

The image of the camera array has led to speculation that Xiaomi is about to unveil a new phone with high-end camera capabilities.

A leak back in March suggested that a whole load of new Xiaomi handsets are coming our way in Q3 2020 (via GizChina). It’s unclear which phone is set to be unveiled tomorrow, but it could possibly be a mid-ranger to accompany the recent unveiling of the Xiaomi Mi 10 Pro.

The Mi 10 Pro comes in with a hefty price tag, around £1000, so an all-new mid-range sister handset could be an appealing addition to the Xiaomi range.

We’d be pleased if the new handset was a Xiaomi Mi 10 SE, which has been in testing for a while, according to some rumours. The Mi 9 SE was a great offering, with an appealing price and plenty of features. It’s currently rated as our best Android phone under £350. Our reviewer said:

“The Xiaomi Mi 9 SE is a pocketable glass and metal phone that feels and looks like a flagship, and, despite an RRP of £349, it can be picked up for under £300 if you shop around. The phone has a 19.5:9, 5.97-inch screen that sports a Full HD resolution, so it’s sharper than the much pricier iPhone XR.”

We’re hoping for a new handset that draws a similarly appealing compromise between price and features, given that the huge price tag on the Xiaomi Mi 10 Pro will make it inaccessible to many would-be fans, and especially now that Apple’s stepped into the affordable market once more with the iPhone SE 2.