The Samsung Galaxy Note 7 has a couple of things in common with your favourite horror film character; it could potentially burn you alive while you sleep and it just outright refuses to die despite an incredible number of attempts.

New usage figures published by Apteligent this week (via Sammobile) suggest that despite, Samsung’s repeated efforts to recoup or disable errant Note 7 devices, it is still being used as much as many Android big hitters.

For example, during the week ending December 11, .

Although the Note 7 accounted for under 0.05% of new flagships, the Google Pixel and Pixel XL are both only just above that mark, according to the published data. 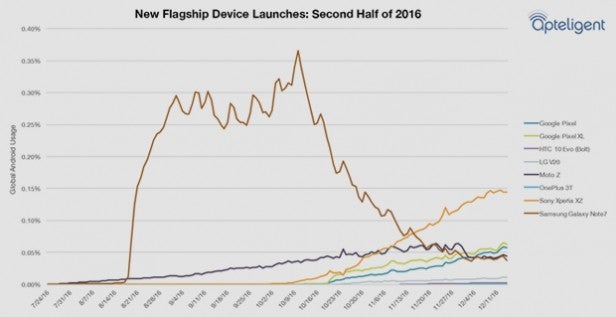 Samsung reckons it has recouped around 90% of all Note 7 devices and recent measures to bring in the rest have included shutting down connectivity and reducing the max battery charge to only 30%.

In the United States, the firm is planning to release an update that effectively bricks the device.

It remains unclear why folks continue to avoid pleas to return the Galaxy Note 7 and continue to use them.

Reports over the weekend have suggested Samsung knows what caused the catastrophic flaw, but is yet to publish details.

Can Samsung recover from the Galaxy Note 7 saga? Share your thoughts in the comments below.