BT Broadband suffered another service outage today, following a major fault yesterday which left both corporate and consumer customers without internet. Is BT Broadband down right now? Not according to the company, but there may still be more to it than that. Here’s everything you need to know – and what to do if you’re still affected.

BT Broadband Down – The latest news

Less than a day after service outages left thousands unable to get online, BT customers once again reported issues as the UK woke up today (Thursday July 21) – scroll to the bottom for our advice on what to do if you’ve been hit or are still affected.

Server status site Down Detector showed numerous reports of problems beginning around 7.30am, while BT’s service status page appeared to also be experiencing issues. Other providers including Sky and Plusnet are also understood to have experienced difficulties.

At present, BT claims to have resolved the bulk of the issues: 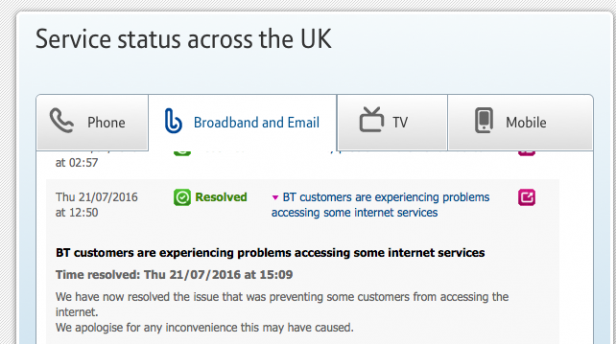 However, some people are still reporting issues as we head into the evening:

It’ll come as no surprise that the internet – or at least those that were still able to use it – made the most of the latest BT Broadband balls-up.

Here’s a quick sampling of some of the best reactions from earlier:

BT Broadband Down – A quick timeline

Reports of BT’s broadband service being down started surfacing at around 9:30am BST yesterday morning (Wednesday, July 20) and BT confirmed it was experiencing problems.

Yesterday’s fault appears to be linked to California-based data centre operator Equinix, the BBC is reporting, although BT said the problems stemmed from one of its partners’ sites in London – an east London-based site operated by Telehouse North (Twitter profile: “the most advanced and connected data centre”) that apparently experienced a 20-minute power cut.

A number of major UK banks also experienced problems yesterday as a result of the outage. These include Lloyds, Barclays, NatWest, Halifax, Ulster Bank, Santander, HSBC and RBS, according to customers who were reportedly unable to log in to their online banking accounts.

BT once again confirmed that it was experiencing issues with its broad service early on Thursday (July 21):

Plusnet also copped to the downtime on social media:

Reporting from his home, our Reviews Editor Alastair Stevenson confirmed that BT’s service was still on the wobble for much of the day:

“Internet has been restored, but connection speeds are still lower than normal. I’m also experience intermittent cut outs that force me to restart my Smart Hub router.”

What to do if you’re affected

The company advises people to head to its Service Status page for the latest information on their area and to report faults, although the page itself seems to have experienced its own problems. Go figure.

You can also check out Down Detector for additional information on what might be going wrong near you. It notes ongoing BT problems in London.

If you’re affected, there’s not really much you can do until BT sorts it out, although certain intrepid Twitter users have been sharing workarounds to varying degrees of success.

To our mind, tethering your phone to your computer and using mobile data to access the internet is perhaps the most obvious short-term fix, but make sure your network supports tethering and that you have an adequate data allowance before pairing up – the last thing you want is a shock bill because of BT’s balls-up.

The service provider last experienced a major outage in February, with users unable to get online for several hours.

What a BT said about the outages…

Not that anyone is actually be interested in BT’s officially sanctioned grovelling line, but an anonymous spokesperson for the company wanted us to know that:

“We apologise to those BT customers who had problems connecting to some internet services this morning. Internet usage is now back to normal for consumer and small business customers. A small number of larger businesses may still be experiencing some limited internet access. Engineers should have these fixed soon.

“The issue, which affected BT and other providers, was due to Telehouse North, one of our internet connection partners in the docklands, suffering power issues. The issue affected less than five percent of our customers’ internet usage, and BT took immediate action to minimise these issues by redirecting traffic.”

See, it wasn’t BT’s fault its own broadband service was down! Don’t blame BT! Someone else had the magic internet switch, goddammit!

Watch: How to improve your home’s Wi-Fi

Are you affected by the BT Broadband outage? Let us know in the comments below.