Apple has just announced the iPhone SE 2, offering a budget-friendly option for iOS fans due for an upgrade, but it isn’t the only phone to enter the market this week with an attractive price tag.

OnePlus launched its flagship OnePlus 8 earlier this week, offering 5G connectivity at a lower price than some of its next gen-boasting predecessors.

But, how do these affordable smartphones stand up to each other?

One of the most striking physical changes on the iPhone SE 2 is the return of the Touch ID sensor. The phone also sports a pretty chunky bezel that looks dated next to most mobile devices on the market right now. To be fair to Apple, the phone is modelled after a three-year-old device, so it’s bound to look a little out of fashion. That said, at less than £500, some users might be willing to settle for – or even prefer – a physical button to the iPhone 11’s Face ID.

The OnePlus 8 looks much slicker, in comparison. The fingerprint scanner and the punch-hole camera are buried beneath the display, eliminating the need for any unsightly buttons or bezels. The colours are more interesting too – though your options are slightly more limited. The iPhone SE 2 comes in three colours, black, white and red, while the OnePlus 8 comes in black as well as an eye-catching turquoise.

Both phones have glass backs and rounded corners, though the OnePlus 8 also sees a curved OLED screen. The OnePlus 8’s screen is also bigger at 6.55-inches to the iPhone SE 2’s 4.7-inch LCD display.

The iPhone SE 2 has an IP67 rating and is capable of wireless charging, while OnePlus has yet to give its base model a water resistance rating or the latest charging tech. Neither phone features a headphone jack.

Getting you the new iPhone SE for less, this is the perfect contract if you're buying the SE for a child, or as a cheap secondary device.

With absolutely no upfront cost to speak of and a sizeable chunk of data to boot, this iPhone SE contract is the perfect all-rounder.

Apple's new affordable handset is here, and buying through John Lewis will also nab you a two-year warranty at no extra price, just the thing to give you peace of mind.

The iPhone SE 2 might look a little older than the rest of the iPhone family, but it’s what’s inside that counts – and the A13 Bionic chipset is the same one found in the iPhone 11, iPhone 11 Pro and iPhone 11 Pro Max.

The OnePlus 8, on the other hand, is kitted out with Android’s latest and greatest Snapdragon 865. In fact, when we tested the OnePlus 8’s performance for ourselves, the phone came second to only the iPhone 11 Pro. We’ll have to get our hands on the SE 2 to see where the A13 Bionic puts the budget phone in comparison to this OnePlus contender.

The OnePlus 8 comes with 8GB or 12GB RAM, depending on the colour you pick up, while RAM on the SE 2 is right now unknown. While both phones come with 128GB and 256GB storage options, the SE 2 also comes with a smaller 64GB model.

The OnePlus 8 runs Android 10 with the Oxygen iOS interface, while the SE 2 runs iOS 13 as well as Apple Arcade and Apple TV Plus.

The battery on the OnePlus 8 charges up fast but the screen and 5G modem cause it to drain quite quickly. There’s little we can say about the battery life on the SE 2 until we get a chance to test it, but the A13 Bionic chip will likely make it an improvement from the iPhone 8 it is modelled after.

There’s also the huge perk of 5G with the OnePlus 8, while Apple has yet to bring the next-gen connectivity to any of its devices.

The OnePlus 8 has a less impressive camera than the OnePlus 7T but is better equipped than the iPhone SE 2.

The OnePlus 8 features a 48-megapixel triple camera system, including a 116-degree ultra-wide lens and a macro lens for close-ups. The phone also includes Nightscape to boost clarity in low-light cityscapes and Smart Pet Capture to assist you in taking 300 pics of your cat during the lockdown.

The SE 2 has a much more basic rear setup, with a single 12-megapixel sensor with an f/1.8 lens, Smart HDR and digital zoom.

Both phones boast 4K video support up to 60fps as well as portrait modes. 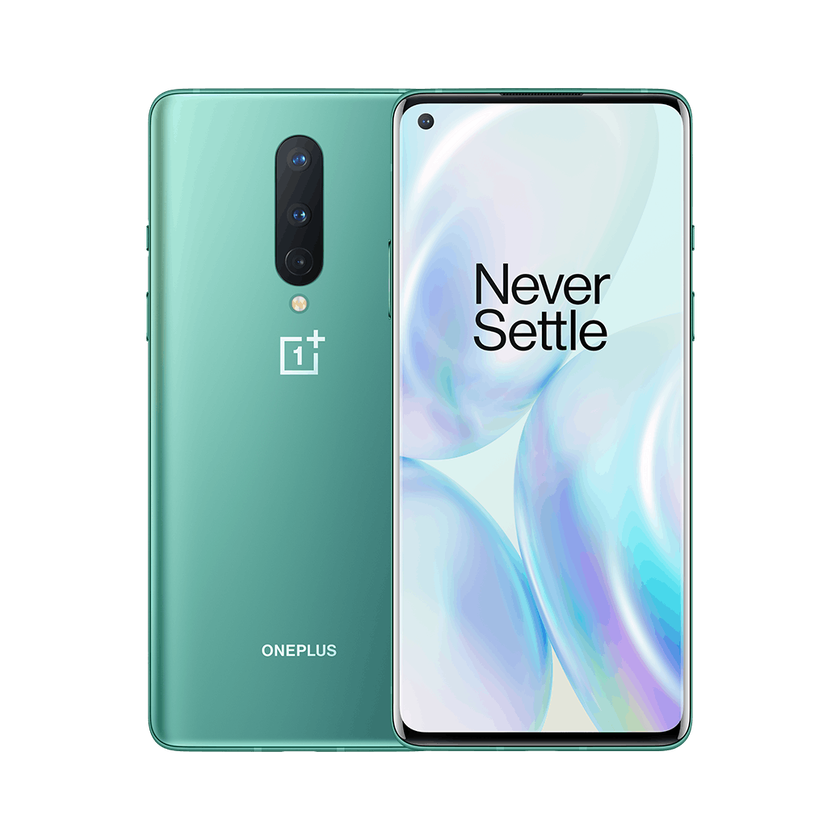 Order the all new OnePlus 8 for less than £600. Or put a bundle together with your choice of accessories and save up to 20%. Get all the data you could need in this juicy unlimited Three plan to binge and update, and receive a free pair of Bullets Wireless Z headphones with an upfront cost of just £29.

OnePlus 8 on Three - 12GB of Data, Unlimited Minutes and Texts

If you're looking to keep the price down and don't see the need for a huge dose of data, this 12GB plan will more than see you through from month to month. Pay just £29 upfront.

The SE 2 will likely be the most affordable iPhone release of 2020, while the OnePlus 8 is incredibly well-priced for a 5G Android handset.