Ever since the first iPhone launched back in 2007, we’ve turned to Google for help with our Apple smartphone woes, so history tells us things will be no different with the forthcoming iPhone 8.

Google is usually the first place we go when we want to find something out. It’s estimated that the US search engine giant handles around 4.5 billion searches per day, and a fair few of those queries are about the iPhone. But what exactly are we asking Google about Apple’s flagship handset – and what does it say about us?

Working with the Google Trends team, Trusted Reviews has obtained historical search records for the iPhone, giving us unparalleled insight into the Google Search habits of Brits over the past decade.

We can now reveal the top 10 searches about the iPhone in the United Kingdom for every year going all the way back to 2007 – and we’ll be sharing some interesting insights along the way.

The main takeaway? Our history of searching for help using our Apple handsets suggests that the iPhone 8 – however incredible – will still require a bit of assistance from the internet to allow us to unlock the true power of the new device (or devices).

In other words, that the iPhone – while a wondrous piece of tech – isn’t always as easy to use as we think. Here’s why history leads us to this conclusion.

Pre-register for the latest handset releases

What does the history of iPhone Google searches tell us?

1. Most people are trying to find out how to do something

The most obvious trend is that people aren’t looking for basic information on the iPhone. By and large, they’re not asking Google for details on the iPhone’s specs or release date. Instead, they’re trying to find out how to do things.

The overwhelming majority of the top 110 iPhone searches going back to 2007 include the word ‘how’ – in fact, 89% of all the searches we obtained are ‘how to’ queries. 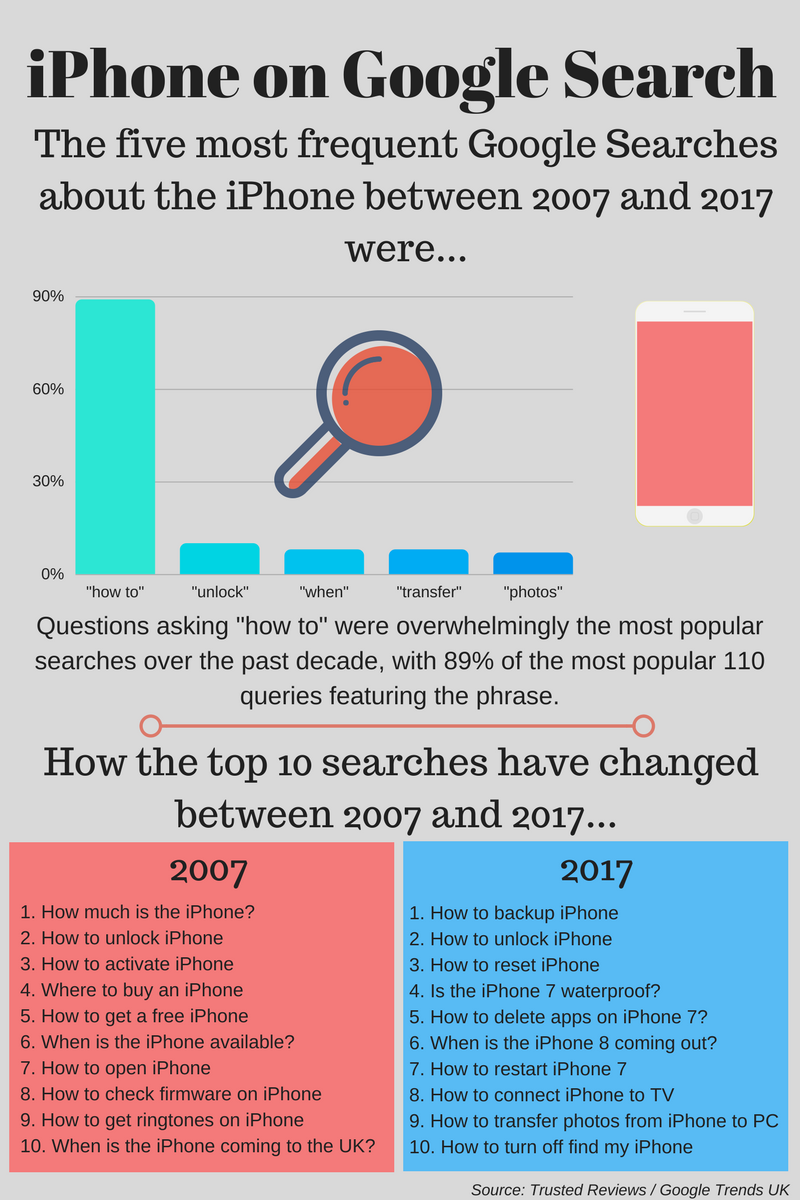 We spoke to Ru Bhikha, a Mobiles Expert at uSwitch, who says our findings aren’t surprising, and that the figures may suggest getting simple tasks done on an iPhone may not be as simple as Apple hopes.

“With an abundance of information available to consumers, it’s no real surprise that iPhone users – new users, upgraders and network switchers alike – are seeking out trusted sources to help them cut through the din,” explains Ru Bhikha, Mobiles Expert at uSwitch, speaking to Trusted Reviews.

“Such a high incidence of ‘how to’ searches demonstrates more than a degree of assumed digital literacy on the part of handset manufacturers – not just Apple,” Bhikha continued. “Even if the iPhone is undoubtedly intuitive, Apple converts will likely struggle to seamlessly make the jump from other handsets.”

“Quite simply though, these searches show just how important it is for users to be able to access the full functionality of their handsets – even above specs and launch dates,” he added.

So while we’re confident the iPhone 8 will be Apple’s best phone yet, there’s every chance you’ll still be asking the internet for tips on how to make the most of your shiny new handset – and in some cases, complete seemingly basic tasks.

2. One question was the most popular nearly every single year – until 2016

Of all the searches we’ve tracked, a tenth were this exact search term. This makes it the most popular question overall. But is everyone who searches ‘How to unlock iPhone’ looking for the same thing?

Some people, for instance, may be trying to find out how to unlock an iPhone in the security sense i.e. sliding to unlock, entering a password, or using a fingerprint scanner.

“This data perhaps speaks more to our reliance on search engines to provide – and verify – even the most simple of answers,” explained Bhikha. 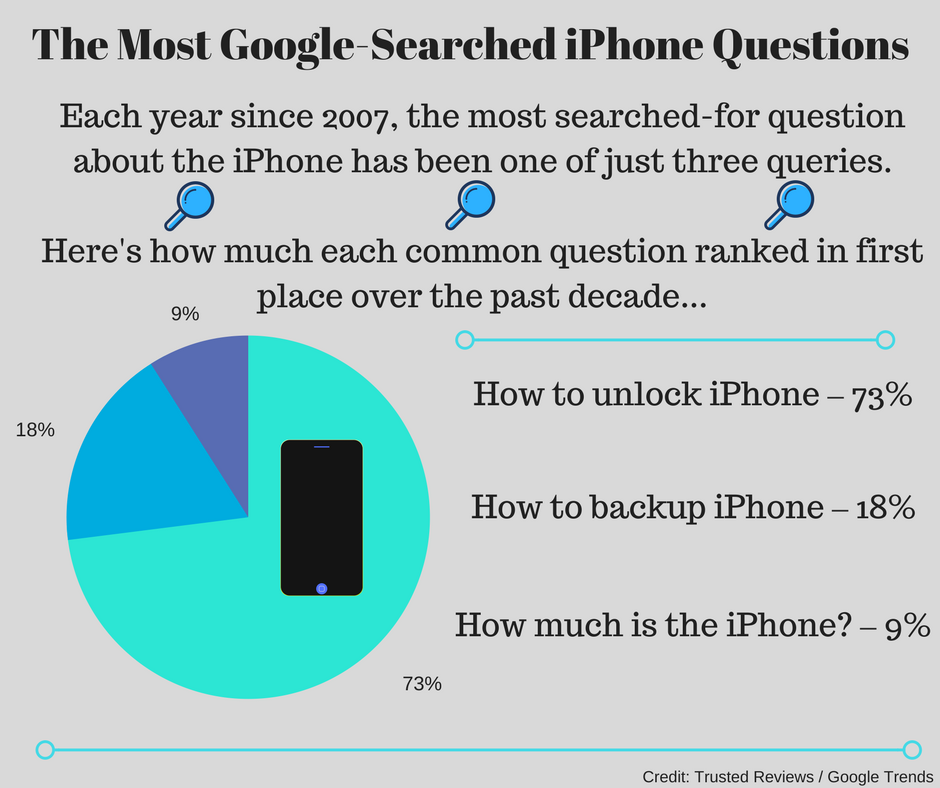 Others, however, may be trying to discover how to unlock an iPhone that’s been locked to a network. By unlocking a locked phone, it would allow customers to use a SIM card from any network – rather than being restricted to the network operator who first sold the phone.

Getting your phone unlocked in the UK is now easier than ever (although some networks make it more difficult than others), and more people likely understand how the process works than previously. This probably explains why the query was eventually replaced by ‘how to backup iPhone’ for the top slot in 2016.

3. 2007 was full of weird questions that never showed up again

The debut year for the iPhone 8 featured a mix of Google searches that didn’t show up much in other years, simply because the concept of an iPhone was still so new to people.

For instance, the most common search in 2007 was ‘How much is the iPhone?’, which is a question that we only saw in the top 10 again in the two years that followed. Given that the iPhone was so different to almost every other phone, people weren’t exactly how sure how this new “smart phone” would be priced. Very highly, we soon learned.

Most other queries in the year were around actually procuring an iPhone, with the following questions all making the top 10:

We also saw ‘How to check firmware on iPhone’, which likely relates to Apple’s infamous version 1.1.1 firmware, first made available back in 2007. This firmware was intended to restore jailbroken iPhone models to a “factory-fresh” state, which was a nightmare for anyone who was running third-party apps. There were even reports that the update was bricking some handsets. This led to many users actively trying to avoid the update – hence this search.

But the best question, which came in at number seven, was ‘How to open iPhone’. The phone? The box? We may never know… 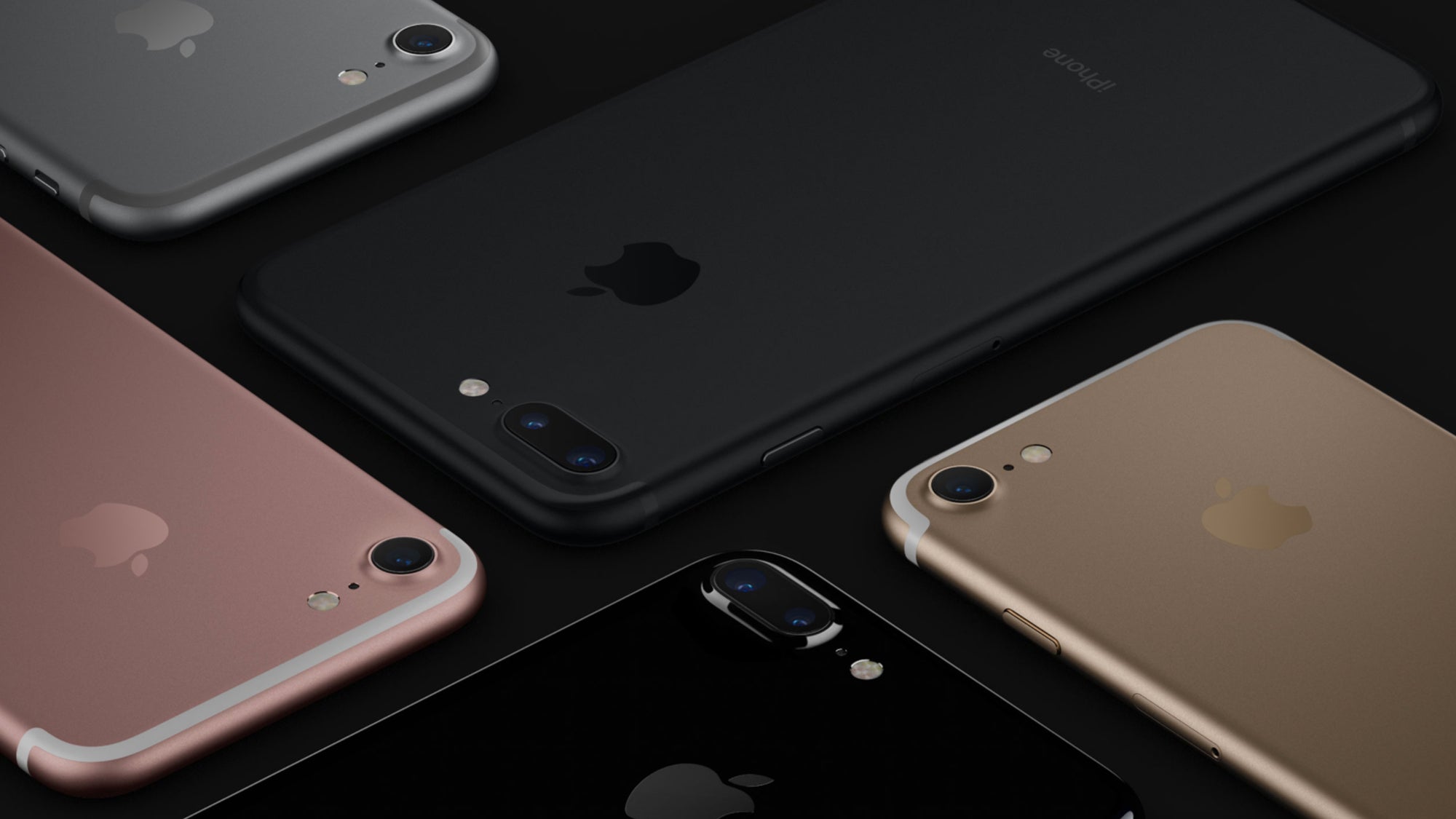 It feels like there’s been hype for the iPhone forever, and that’s partly because there was. Years before the Steve Jobs held up the iPhone on stage to frenzied tech reporters, rumours endlessly circulated suggesting that Apple may one day enter the phone market.

But Google’s search results suggest that iPhone hype didn’t really pick up until 2009, which is when we started seeing a spike in people asking about the next model. It was in 2009 that we first saw the question ‘where is the next iPhone coming out?’ enter the top 10, with varying iterations of that question re-appearing every year thereafter – with the exception of 2015, for some reason.

Peak hype appears to have been in 2011 and 2012, when the question managed to squeeze into the second slot for both years – its highest position ever. Amusingly, the specific question for both years was ‘When is the iPhone 5 coming out?’.

That’s because the iPhone 4 launched back in 2010, leading many people to suspect an iPhone 5 debut in 2011. However, Apple actually unveiled the iPhone 4S that year, which gave the query a new lease of life for a further 12 months – until the iPhone 5 eventually landed in 2012.

5. There’s only one instance of iPhone users asking for help to download an app – and you can probably guess which one

Google is almost certainly inundated with requests from iPhone owners about how to download specific apps on a daily basis – but only one managed to break into our 110-strong list of questions. Requests for one app were so numerous that the query bagged 10th position in 2016, and you can probably guess what it was…

Yes, ‘How to get Pokémon Go on iPhone’ was one of the most frequently asked questions of 2016, which is no real surprise. The search was probably bolstered by the fact that the global rollout was massively staggered, meaning many countries were left to wait months to receive the game on iOS.

Brits had to wait 12 days after the US release to officially bag it, but there were workarounds to get it early – almost certainly ramping up search for the term as a result. 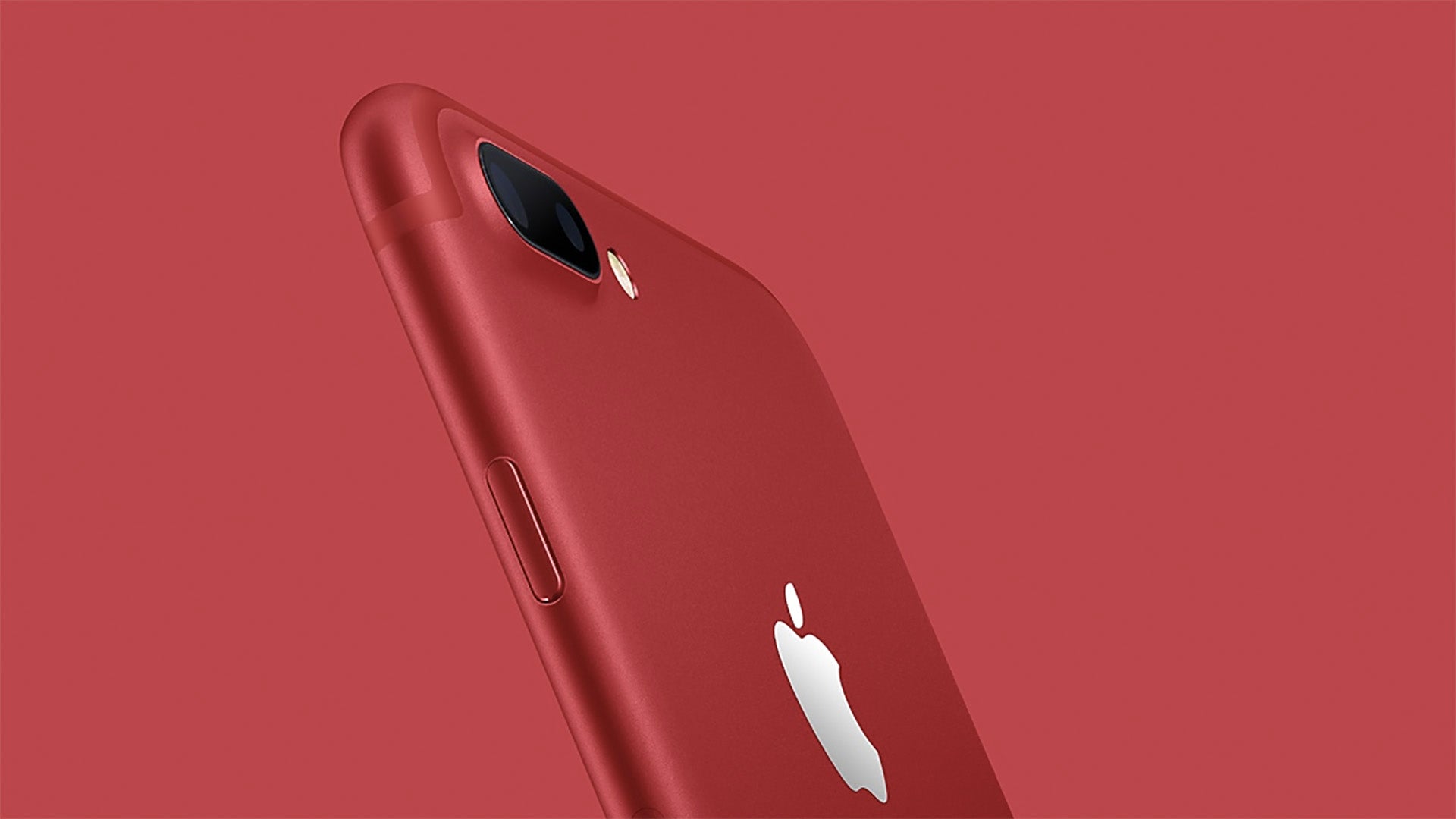 Without further ado, here are the most popular search terms for the past 10 years.