A new leaked image purporting to show some of the iPhone 7’s internals is making the rounds – and apparently reveals that Apple’s next smartphone will feature a new fast charging standard.

Android manufacturers have been mucking about with making their phones charge quickly for a while now – Qualcomm’s Quick Charge and the OnePlus’ Dash Charge are a couple of the names on the market – but Apple has so far failed to join the speedy party.

That could be about to change, depending on how gullible you’re feeling today.

Posting on Twitter, @the_malignant claims that the following photo is a leaked snap of the iPhone 7’s logic board (next to that of the iPhone 6S): 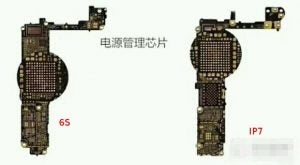 Apparently, the hazy pic speaks volumes about the iPhone 7’s juicing capabilities, telling us that the new phone will support chargers that output sy 5V/2A (five volt, two amp), a significant improvement over the current one amp current.

But to say the image is dubious would be a hefty understatement. Both in terms of its visual quality (dodgy) and its origin (a mystery Chinese source as tweeted by someone on Twitter for less than a year) it doesn’t stand up to serious scrutiny.

Don’t get too excited, in other words.

More reliable speculation points to Apple potentially dropping the 3.5mm headphone jack with the iPhone 7 (or potentially the iPhone 8) and debuting a new Space Black flavour.

We’ll know for sure in September when Apple is widely expected to unveil its next handset.