The iPhone 7 might be a long way off, but that doesn’t mean leaks are any less frequent.

A case for Apple’s next flagship iPhone has seemingly been leaked online.

The YouTube channel Unbox Therapy, known for its track record for leaking tech, has posted a video showing off cases for both the iPhone 7 and iPhone SE.

The channel claims the cases were provided via legendary leaker Sonny Dickson, and come from a Chinese casemaker that’s already privy to design schematics for the device.

That wouldn’t be hugely surprising; several leaks have already shown what look to be early renders and schematics for the iPhone 7. However, as we’ve got no way of verifying the legitimacy of this leak, take the following with a pinch of salt.

The first thing to note is that the iPhone 7 case has a significantly larger – and slightly offset – camera cutout.

That suggests the iPhone 7 could feature a bigger image sensor, or perhaps even two cameras.

A phone’s photography potential is one of its most important features by 2016’s standards, so we wouldn’t be surprised to see Apple making efforts in that sector.

The iPhone 7 case also appears to have no cutout for a headphone jack. That’s important, because Apple has long been rumoured to scrap the 3.5mm audio port with the iPhone 7. 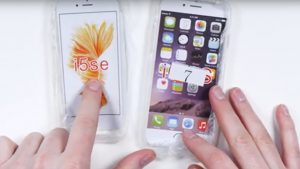 It’s alleged that users will instead have to connect their headphones via a Lightning port, which could mean having to purchase an adapter for many customers.

The move – which hasn’t even been confirmed by Apple – has already caused significant controversy among Apple fans, so it will be interesting to see whether the company follows through.

One of the main takeaways from the video is that the iPhone 7 will look very similar to the iPhone 6S.

In the video, we see the exciting 6S slotting into the case almost perfectly. The bits that don’t quite fit are the camera and the volume buttons.

Apple is usually very cautious about making significant changes to the iPhone design. However, we’d usually expect to see a bigger changing moving from an –S model to the next number iteration i.e. the iPhone 7.

Related: Why we need an iPhone SE

We also see two symmetrical cutouts on the bottom of the case in the video. 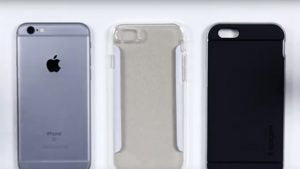 This suggests the possibility of dual-speakers on the base of the device, which is in contrast to the current single-speaker iPhone 6S design.

Unfortunately, there’s no way of us telling whether Apple will actually include two speakers until the device – should it even exist – launches later this year.

Finally, the video also shows off a case for the iPhone SE, a 4-inch handset that’s been rumoured for an age.

It’s said that Apple will unveil the device at its planned March 21 event, which takes place in the company’s hometown of Cupertino, California.

We’re also expecting to see a 9.7-inch version of the iPad Pro at the event, as well as several new Apple Watch straps.

What would you like to see from Apple’s iPhone 7? Let us know in the comments below.