Apple has formally announced the iPhone 6S, much to the surprise of absolutely no-one. Thank you, rumour mill.

The handset is the ninth-generation entry into Apple’s iPhone series, which first launched back in 2007.

The series has come a long way since then, with the iPhone 6S touting a number of changes including a rose-gold colour option, a “3D Touch” pressure-sensitivity display, and a stronger series 7000 aluminium body.

Apple announced the new device – alongside the iPhone 6S Plus – at its annual iPhone launch event, which it held in a brand-new venue this year: the Bill Graham Civic Auditorium in San Francisco, USA.

Speaking at the event, Apple CEO Tim Cook said: “What we have to show you today is really awesome, and while they may look familiar, we have changed everything about these new iPhones.”

Let’s get down to device specs. Just like last year’s iPhone 6, the iPhone 6S has a 4.7in Retina display.

, custom-built by Apple, which is purported to be 70% faster at processing than last year’s A8 chip. That rises to 90% faster for graphics tasks – a “console-class” GPU, apparently.

The M9 motion co-processor is embedded directly into the A9 chip, which means it’s always on. That’s a first for the iPhone.

When it comes to new features, the headline addition is the 3D Touch display. This means the iPhone 6S screen is pressure-sensitive, just like the Apple Watch display and the 12in MacBook trackpad. Although on those devices, it was called “Force Touch”.

Speaking about 3D Touch, Craig Federighi, vice-president of Software and Engineering, says: “Of course, 3D Touch is integrated throughout the system and all the apps you use most.”

The camera has seen a number of upgrades, including a move to a 12-megapixel camera, up from last year’s 8-megapixel sensor – that’s a pixel increase of 50%. 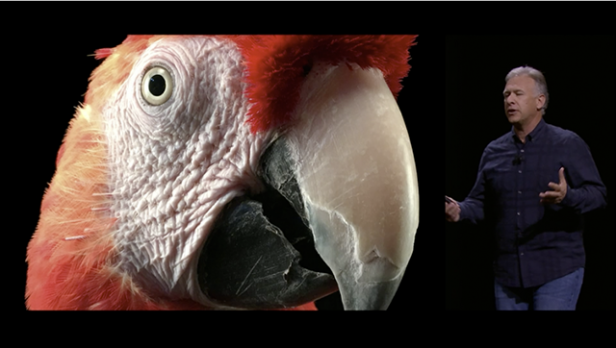 An image taken on the iPhone 6S

What’s more, the new handset is also the first iPhone able to shoot 4K video. That means there will be 8 million pixels in every single frame of footage. Not bad, eh?

There’s also a new Live Photos feature. Basically, when you take photos, images just before and after you hit the shutter button are also taken. Then you can “Force Touch” any picture in your camera roll, and enjoy the scene as a short GIF.

Siri, too, receives an update. You’ll now be able to access the digital assistant from anywhere in the operating system, just by saying “Hey Siri”.

Other features carried over from the last iPhone is a Touch ID fingerprint scanner (albeit an upgraded version), an NFC chip, and the same design aesthetic.

The device also has an LTE-Advanced modem that’s good for a theoretical 300mbps download speed. It supports 23 bands, making it a solid handset choice for worldwide roaming.

The iPhone 6S will ship running iOS 9, which goes live to the public on 16 September.

That all sounds great, but how much is it going to cost you? Prices for the iPhone 6S start at $199 on a two-year contract, at $27 per month. That means the iPhone 6 drops to $99 for a contract of the same length.

The new iPhone 6S will be available for pre-order from 12 September, and will go on sale officially on 25 September in the UK, US, and more locations worldwide.

What do you make of Apple’s new iPhone? Let us know in the comments.

Check out our smartphone buyer’s guide below: