O2 has tweeted that it will support iPhone 5S and iPhone 5C on its 4G network, with further details coming soon.

At present O2 still isn’t listed on Apple’s supported list, which leads us to believe there will be an O2 specific version just to support is network.

Apple has confirmed that the newly unveiled iPhone 5S and lower-cost iPhone 5C will only be compatible with the Vodafone and EE 4G networks in the UK.

The details have popped up on the iPhone LTE listings page, revealing that the newly launched O2 4G network won’t support the iPhone 5C and iPhone 5S, at least for now.

Although there are no further details offered by Apple at this point, we have contacted the Cupertino company and O2 for information on the 4G LTE compatibility of the new iPhone duo.

It seems a shame that anyone wanting to sign up for the new O2 4G network won’t have launch access to the new iPhone pair.

Apple launched the new iPhones during a dedicated event at its Cupertino campus, but failed to live stream the event for its fans.

The company has opted to launch the iPHone 5C after all, despite previous claims that Apple would never launch a “budget” smartphone.

The iPhone 5C is modelled on the current iPhone 5, with the same A6 processor, but has a new polycarbonate colourful design that reduces the price a touch.

Prices start at £469 SIM-free for the 16GB option, while the 32GB model is priced at £549, so in fact it isn’t quite as cheap as everyone hoped or expected.

The flagship iPhone 5S has a host of new features for consumers, including the new A7 processor, better iSight camera and a new M7 motion chip with Nike Plus Move built in.

It’s also the first to pack a fingerprint scanner into the home button, something which Apple has dubbed Touch Id.

Both of the new iPhone models come with the new iOS 7 pre-installed. 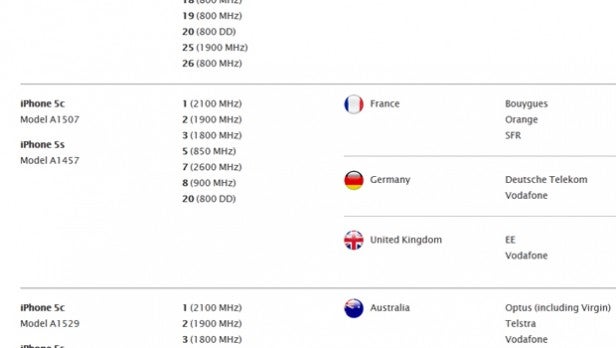 The fact the iPhone 5S and 5C will only support 4G on the EE and Vodafone networks is great news for EE and Vodafone, but no one else. Prices on 4G tariffs are still way too high for the great majority, especially for anyone who wants to use 4G to its full effect and use reasonable levels of data. An initial iPhone lock-in will make it hard for O2 and Three to compete, and give little incentive to EE or Vodafone to compete on price. The result? More expensive contracts for everyone.