Samsung and Apple are titans of the smartphone world, so which one should you pick? We compare the two rivals for camera, performance, display, and design.

On September 10, Apple launched its much-anticipated iPhone 11 line-up, with the titular model being the most affordable and lowest-spec of the trio. In this article we pit the known details of this device up against our assessment of the Samsung Galaxy S10, which we have put through our rigourous review process, giving you our early verdict on the match-up between the two handsets.

The iPhone 11 has a dual camera array, consisting of a main wide angle lens, and a 120-degree ultra wide angle lens. The main sensor looks to be very similar to that found on the iPhone XR, which we praised as the equal to that of the iPhone XS in most qualities except Portrait Mode. The ultra wide angle lens should add some welcome versatility to this set-up, and in Apple’s demonstration it looked very straightforward to switch between the two in the camera app.

The Samsung Galaxy S10 goes one further, with a total of three camera sensors: a main 12-megapixel snapper with a variable aperture, an ultra wide 16-megapixel unit, and a 12-megapixel telephoto lens. We rated it as a fantastic versatile camera system that was a marked improvement over the Samsung Galaxy S9, but still lagged behind the Google Pixel 3, especially in lowlight situations.

Based on specifications there is no obvious winner between these two devices – both seem to offer a very good camera, and it’s only in the review that we’ll be able to pick a winner.

The Samsung Galaxy S10 runs on an Exynos 9820 chip, which we found to be capable of running intensive apps smoothly, and multitasking efficienctly. By comparison, the iPhone 11 boasts the new A13 Bionic chip, and from we’ve heard so far we it expect it to be a top performer. The iPhone XS’s A12 Bionic outperformed the Samsung Galaxy S10 in our benchmark tests, and Apple has claimed that the A13 Bionic chip is 6x faster. Based on this evidence, we strongly expect the iPhone 11 to outperform the S10 with regard to performance. 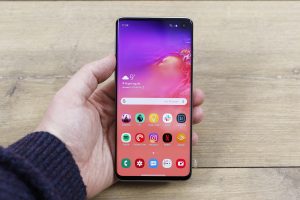 There was little information in Apple’s presentation about the iPhone 11’s screen, and there’s a reason for that: it’s almost identical to that of the iPhone XR. Measuring 6.1 inches diagonally, it is an LCD display has a resolution of 828 x 1792, which is barely higher than 720p. This sets it back against most of the competition in its price range, however, in our experience the screen would be a fine upgrade if you’re transitioning from an iPhone 7 or iPhone 8.

We identified the Samsung Galaxy S10’s screen as one of its key selling points. It’s the same size as the iPhone 11 screen, but is AMOLED rather than LCD and has a far higher 3040 x 1440 resolution along with HDR10+ support. It’s bright, colourful, and easily readable in direct sunlight — so we expect the Galaxy S10 to comfortably win this contest. 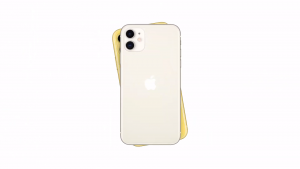 In this, as in many respects, the iPhone 11 strongly resembles the iPhone XR. The wide notch returns again and it starting to look somewhat dated in comparison to innovative Android flagships with teardrop notches or pop-up cameras. The most noticeable new touch added to the device is a controversial one: a much larger, square-shaped camera bump. It seems especially incongruous on the iPhone 11 since the module’s design leaves wasted space that could otherwise house another lens just like the iPhone 11 Pro. On the other hand, the device is available in six shades: yellow, purple, black, white, green, and (PRODUCT)RED.

The Samsung Galaxy S10 device looks far more modern thanks to its small and unobtrusive cutout camera notch in the screen. The rear of the device also is available with an attractive pearlescent finish. However, one potential negative point is the curvature of the screen around the sides, which sometimes registered accidental contact from a palm press — an unnecessary irritation. But from what we’ve seen so far, the Samsung Galaxy S10 offers a more attractive design.

iPhone 11 is priced from £729 (for 64GB storage), while the Samsung Galaxy S10 was available from £799 (for 128GB storage) at launch. The iPhone 11 base model may be less expensive, but 64GB is a fairly meagre amount of storage; but the 128GB variants costs £779, which is still somewhat cheaper than Samsung’s, so this is clearly the option to go for if you want to save a bit of cash cash.

It’s difficult to give a recommendation of one over the other at this stage, since we haven’t yet put the iPhone 11 through our full assessment. But we can already see that the contest between these two models will be very intense: the Samsung Galaxy S10 has the edge when it comes to display and design, but the iPhone 11 is fully expected to have superior performance and is somewhat cheaper too. The deciding factor could come down to camera performance, but it’s clear that both devices are strong smartphones and are likely to serve you well.