Apple’s iPad Pro 2018 is here, offering tablet fans a new high-end device for the upcoming festive rush. It’s a gorgeous slate, with a stunning screen and oodles of power, but how can you make the most of one of its key features, the USB-C port? In this guide, we’ll explain how to use USB-C devices likes SD cards, USB hubs, charging cables, hard drives and more with the new iPad Pro.

One of the biggest new features for this iPad is the switch from the typical Lightning port to USB-C. Aside from allowing you to use your MacBook charger to juice up your iPad, it opens the door for loads of things to be plugged in.

But how many of them actually work? Let’s plug everything we can think of in the new iPad Pro and see what works.

There’s no headphone jack on the iPad Pro 2018, so if you’ve not got a pair of AirPods or other wireless headphones you’ll need to use that USB-C port.

Apple is selling a £9/$9 USB-C to 3.5mm headphone adapter that’ll allow you to use traditional headphones, or you can buy a pair of USB-C cans. We’ve tried the Google Pixel Buds and they worked absolutely fine, as does Huawei’s USB-C headphones.

This one is a yes, however there are some caveats. Plugging in a USB-C SD card dongle into the iPad Pro 2018 along with an SD card does indeed work.

This means you can take an SD card straight out of your camera and transfer those pictures directly onto the iPad’s internal storage. Sounds good? Well yes, but annoyingly that SD card will ONLY be read by the default Photos app. If you’re a Lightroom or Pixelmator user it won’t recognise the card and you won’t be able import the pictures directly.

Instead, you first import files into the photos app and then move them to your app of choice. It’s slightly annoying.

You also can’t pass files from the iPad to the SD card. Again, frustrating.

New iPad Pro and external SSD or HDDs = No

This is the big one and arguably the biggest disappointment with the new iPad Pro. You can’t expand the internal storage and transfer files by plugging in an SSD or HDD. Maybe Apple can add this down the line through an update to iOS.

Apple sells both a USB-C to Lightning and a USB-C to magnetic Apple Watch charging cable and you can plug both of these into the iPad Pro 2018.

This turns the iPad into a pretty big, and pretty expensive, portable battery bank.

You can also use a USB-C to USB-C cable to charge something like a Nintendo Switch. 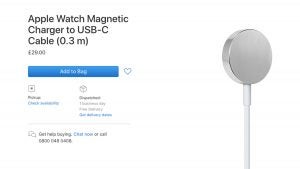 We picked up an USB-C to micro USB cable from Amazon for about five quid with the sole intention of using it charge a Kindle. Luckily it works.

You can also plug a camera in via this method and it’ll transfer snaps across in a similar way to plugging in an SD card. The same method works with USB-C cameras if you’ve got a USB-C to USB-C cable.

USB-C hubs work fine with the iPad Pro 2018. You can plug in a USB-C to USB-A dongle/hub, then plug in a keyboard and it’ll work absolutely fine.

You still can’t transfer files from an SSD or HDD this way.

iOS has supported ethernet for a number of version nows and if you have a USB-C to ethernet adapter you can use it here to get some wired internet action of your tablet. Just remember to turn the Wi-Fi off first.

What have we missed? Let us know what else you can use the USB-C on the new iPad Pro by tweeting us @trustedreviews.