Apple has finally announced the long-rumoured iPad Pro, with a stunning 12.9-inch display.

The rumour mill has been turning out talk of an oversized iPad for years now, without avail.

According to Apple’s Phil Schiller, the iPad Pro has “more power and performance than any iOS device ever”.

The reason for that 12.9-inch display is because it’s as tall in portrait as the 9.7-inch is wide iPad Air 2 landscape, meaning multitasking is going to be pretty awesome on the iPad Pro.

You’re looking at 5.6 million pixels in that 12.9-inch screen too, which Apple states is even more pixels than the 15-inch MacBook Pro with Retina Display.

Plus, that screen is equipped with a variable refresh rate to make sure that you’re always getting the best image.

Equipped with a 10-hour battery life, the iPad Pro comes with a new four speaker system. It dynamically adjusts the audio according to where you’re holding the new larger iPad. It also balances the frequency and can offer three times the volume of the iPad Air 2.

Under the hood you’re looking at the brand new 64-bit Apple A9X chip, which is up to 22 times faster than the original iPad. It has two times the memory bandwidth of the A8X chip found in the iPad Air 2, and two times faster storage.

Apple even claims that the A9X chip is 1.8 times faster than the desktop-class CPU found in devices released in the past year. And it’s perhaps 80 per cent faster than those devices too.

The GPU is up to twice as fast as a console-class graphics chip and 360 times faster than the graphics found in the original iPad.

The iPad Pro comes in a body just 6.9mm thick, and weighs quite a chunky 1.54lb. The original iPad was 1.57lb, so that puts it into perspective. Although you’ve got a lot more screen in the iPad Pro. 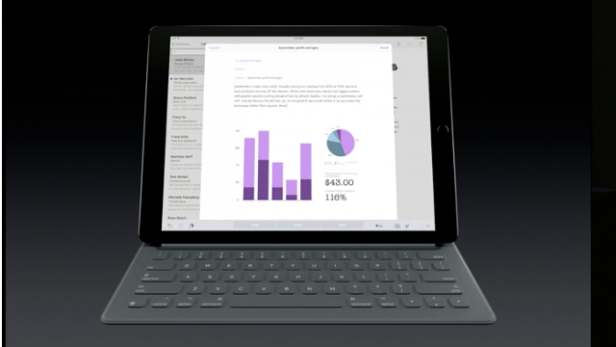 As for accessories, you’re getting two that are specifically built for the iPad Pro.

The first, as you can see above, is the Smart Keyboard. It’s a bit like the normal iPad Smart Cover, but it comes with a built-in keyboard.

It’s covered in an Apple woven fabric that makes the cover but also gives a tactile feel to the keys. The keys themselves are equipped with the Apple Dome switch found in MacBooks.

The Smart Keyboard connects to the iPad Pro via a new port compromised of three small circles – known as the Smart Connector. This carries power and data to the keyboard and the software in iOS 9 automatically changes and adapts your view as it detects the physical keyboard is connected. 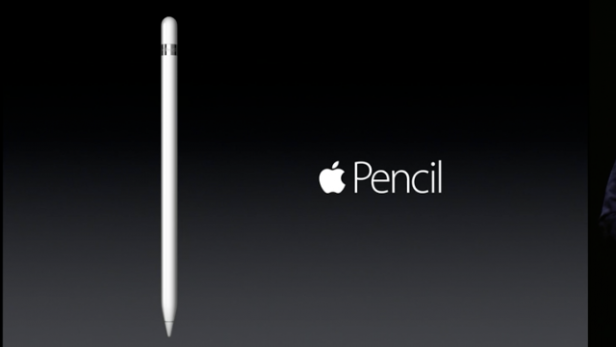 Then there’s the Apple Pencil. This brand new stylus is equipped with Force Data, which can detect the force you use with the Pencil.

It can calculate the angle and orientation of the tip to produce realistic strokes as you draw or create. The Apple Pencil can also be used simultaneously with your finger for what Apple is hoping will make for a realistic experience.

What’s more, it’s got a Lightning connector built into the Pencil so you cna charge it straight from the iPad Pro for a battery boost on the move.