Earlier this week, Apple wowed us all with bold claims of a 50% adoption rate for its brand new iOS 9 software update.

The revelation meant that iOS 9 – the iPhone 6S launch software – represented the fastest iOS adoption in history, but do the figures stand up to scrutiny?

According to Apple, its data was recorded based on App Store visits on September 19 – three days after launch.

However, information collected by a number of data research companies appears to refute the 50% adoption claim.

For instance, both Crittercism and Fiksu measured 23% adoption on September 19.

“When
you look at the three of our numbers…,” said David Appelbaum, VP of Marketing at
Crittercism, speaking to TrustedReviews.

But Appelbaum
isn’t the only one to point out the strange data discrepancy. Suhail
Doshi, MixPanel’s CEO, also noted the contradiction, tweeting:

How do they collect their data?

According to Appelbaum, Crittercism accrues its data by embedding analytics tools into various popular apps on iOS.

Crittercism then builds a picture of adoption rates based on app loads and app usage.

The method is a popular approach to researching adoption, and Appelbaum tells us it’s been very accurate in the past.

“Particularly
as we go back historically, to say iOS 8 adoption, various flavours of
Android etcetera, we’ve found it to be remarkably accurate,” the exec
tells us.

For example, iOS 8 released on September 17, 2014, and
crept over the halfway mark for adoption on October 20, registering 52%
according to the App Store.

Crittercism’s data put iOS 8 adoption at 48% on October 17, 2014, which appears to fit with Apple’s own data from the period.

So when Apple announced its startling adoption rate so early on, the Crittercism team was very surprised.

The
shock stemmed from the fact that as of September 19, Apple hadn’t even
pushed global notifications about the software update to its users.

“They
have not started their active push down yet. You know, the push
notifications that say you have an upgrade available,” explains
Appelbaum. “So a significant part of the population isn’t even
necessarily aware that there’s an upgrade yet, since they haven’t
actually hit the push button.”

Appelbaum continues: “So the
assumption that there’s 50% adoption when they haven’t yet gone to
active push really makes no sense at all. ”

Why is there such a big difference?

Why is Apple peddling a 50% adoption rate when research suggests otherwise?

Crittercism’s marketing lead believes that it’s all about how Apple collects its usage data.

“We
think that it was probably based on App Store traffic. So our
assessment was that they probably based their upgrade stats on folks who
were coming to the App Store, as most likely candidates for upgrade,
and extrapolated based on that,” Appelbaum reveals to TrustedReviews.

The
suggestion here is that regular App Store users are more likely to
update their software compared to those who don’t use the store
regularly.

As such, adoption by regular App Store users would be significantly higher than the actual adoption.

By
choosing this method of data collection, Apple may have inflated its
adoption rate to more than double that of the actual figure.

Fiksu, another data analyst firm, agreed this may be the reason for the inflated figure.

“We
think there’s a pretty simple reason. Our data is gathered from app
usage – apps that have our SDK are installed on hundreds of millions of
iOS devices, and every time a user launches one, we get that event as a
data point, and it includes basic information about the device including
the OS version,” explains Fiksu’s Jeremy Sacco, speaking to TrustedReviews. 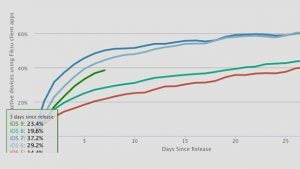 Sacco
continues: “Apple’s data comes from visitors to the App Store. The set
of users who are actively adding apps skews more active – they’re more
likely to be updating their OS. Our data represents just basic usage of
phones (and tablets), so gets a lot more of the casual users who don’t
frequently add new apps.”

There are some other possible explanations as to why Apple’s adoption rate figures might be so different.

For
instance, Apple could be reporting the percentage of eligible users
that have upgraded to iOS 9. Remember: the software is unavailable to
phones launched prior to the iPhone 4S.

However, Crittercism
reckons this isn’t likely. That’s because the company filtered out old
devices that don’t support the software, and saw the adoption rate rise
from 23% to just 25%.

Those figures were trialled in both the US and globally, and the numbers stayed the same.

Speaking
at the time of the Apple announcement, Phil Schiller, Apple’s senior VP
of Worldwide Marketing, said: “iOS 9 is also off to an amazing start,
on pace to be downloaded by more users than any other software release
in Apple’s history.”

We’ve contact Apple about these discrepancies, and will update the article with any response.

Do you think the 50% adoption rate is too good to be true? Tell us your thoughts in the comments.

Check out our iOS 9 features video below: