Apple has finally revealed its first Apple Silicon processor, and it’s called the Apple M1. This new chip will replace the typical Intel Core processor previously found in MacBooks, but what benefits will you see with the transition over to Apple Silicon?

That’s a difficult question to answer without testing the M1 chip for ourselves, but Apple has revealed a tonne of specs for the Mac processor, while also dishing out some impressive claims. We’ve rounded up all of this information, and compared it directly to Intel’s current laptop offering.

While Apple has revealed the M1 chip will be housed inside the new MacBook Air and 13-inch MacBook Pro laptops, the latter still has Intel configurations available to buy from the official Apple store. This highlights the importance of understanding the differences in the Intel vs Apple Silicon quandary.

We’re also expected to see the Intel Rocket Lake-S desktop processors arrive in 2021, which may well be a similar launch window to when the first Apple Silicon iMac becomes available. 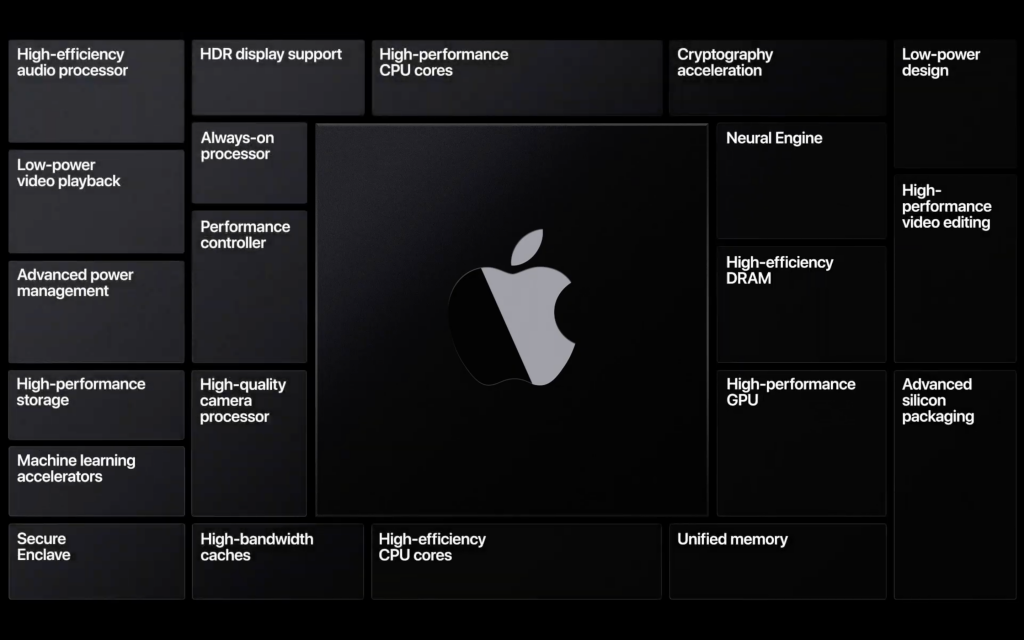 The first Apple Silicon processor is called the Apple M1. Unlike typical Intel chips, the M1 features Arm architecture which is widely regarded as seeing superior power and thermal efficiency. As a result, Apple has been able to remove the fan from the new MacBook Air. Apple Silicon also uses a 5nm process, opposed to Intel Tiger Lake’s 10nm Willow Cove architecture.

The M1 chip features 8 CPU cores and 8 threads, with four of those being high-performance cores and remaining four being high-efficiency cores in order to push battery life up as high as possible. For comparison, the most powerful Intel Tiger Lake chip features just 4 cores and 8 threads. According to a representative for Intel, the company isn’t concerned about having less cores than other CPU makers because Intel’s cores are ‘better’ than competing offerings. That said, Apple suggests the M1 chip offers the “the world’s best CPU performance per watt” so there’s a lot of bold claims flying in from both companies.

Apple’s M1 chip isn’t so impressive in terms of frequency speeds, reaching a maximum 3.10 GHz performance. The Intel Core i7-1185G7 processor can see frequency speeds boosted up to 4.8 GHz, which is significantly higher. But since Apple M1 and Intel Tiger Lake are using such vastly different architecture, comparing specs directly is like comparing apples (pun not intended) and oranges and so isn’t a fair reflection of performance.

The same applies for the integrated graphics, but both Apple and Intel have put a major focus on this area. Apple has dedicated eight cores to the GPU, while calling it the “world’s fastest integrated graphics in a personal computer” which is a big claim, especially since Intel has made such a big deal of its new Xe graphics architecture.

Intel’s Tiger Lake processors support Thunderbolt 4, 5G connectivity, 8K HDR displays and Wi-Fi 6. Apple Silicon isn’t quite as fully featured, but does offer support for USB 4 and Wi-Fi 6. Apple is yet to reveal whether 5G connectivity will be supported by Apple Silicon in the future, but it doesn’t look like the new MacBook Air and Pro laptops packs such a feature.

Intel has previously bragged about the single-core performance of these Tiger Lake chips, but Apple is now suggesting the M1 provides “industry-leading performance for single-threaded tasks” while also claiming it’s the “world’s best CPU performance per watt.”

Intel claims its high-end Tiger Lake chips are capable of playing the likes of Borderlands 3, Far Cry New Dawn and Hitman 2 in 1080p. The macOS software sadly doesn’t play nice with the majority of AAA games, but Apple claims the M1 chip will be capable of various demanding tasks from smooth playback of multiple 8K video to rendering complex 3D scenes. The likes of the 16-inch MacBook Pro has long been able to deal with such workloads, but to hear the MacBook Air can now do so too is mightily impressive.

Apple Silicon is the future for Macs, and the promises of a performance and battery efficiency jump is no doubt very exciting.

It’s far too early to pick an outright winner though, as we’re yet to test any of the new MacBooks. But if you’re going to buy a new MacBook Air or 13-inch MacBook Pro laptop anytime soon, the Apple M1 model certainly looks to be the most exciting and future-proofed pick right now.

Is Apple Silicon powerful enough to justify a move from Windows laptops to MacBook? That’s a more difficult question to answer, but we’ll be addressing it in our upcoming MacBook reviews so keep an eye on Trusted Reviews in the coming weeks.