During the Intel press conference at CES 2020, the company brought the new Horseshoe Bend out onto the stage – a 17-inch foldable laptop prototype. We got to see it close up and, yeah, it’s huge.

Intel had already showcased Lenovo’s ThinkPad X1 Fold onstage before revealing its own vision for an even larger version of the foldable laptop form-factor. The Horseshoe Bend is very much a proof of concept and we will likely see manufacturers, like Lenovo, adopt its ideas in the coming years. 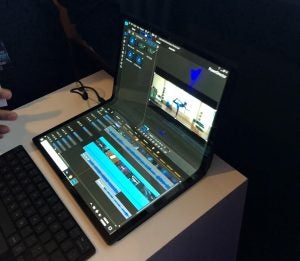 Seeing the Horseshoe Bend onstage, and even closer up, you may wonder why its a concept – the product looks pretty well refined. Well, Intel seem to be remaining cautious.

We saw the product in person and were able to use the touchscreen but, unfortunately, weren’t allowed to bend the actual screen. The screen wasn’t “unbendable” however the Intel representative insisted on making the transition from a laptop-like position to the humungous tablet mode. 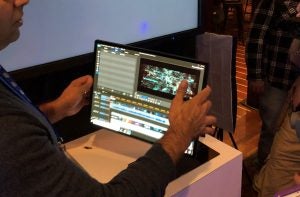 Despite Intel’s reluctance to let us play with the hinge, the transition did look pretty seamless. The concept is a marvel to look at and it was remarkable to see a webpage sprawled across the whole display. However, the practicality and importance of a foldable display on a system this size still remain up in the air. 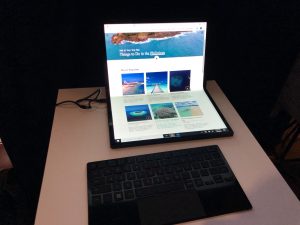 In the laptop mode, half of the Horsebend bend can act as a keyboard while the top can act as a screen – or you can simply use it as a portrait display with a bend in it. This mode feels the most natural but it doesn’t seem like it would lose a lot by being two displays rather than a foldable one – similar to the upcoming Surface Neo. The bend in the screen doesn’t look great either.

Intel also had a non-functional keyboard add-on – similar to the type of keyboard we saw during Microsoft’s Surface Neo reveal – which a representative said is a peripheral they envision would be created to work in tandem with devices like the bend.

The benefit of the Horseshoe Bend display does mean you get a huge 17-inch display when it is flat – but the big question are: when and why would you want to transition from a laptop-like device to a large display? Admittedly there’ll be some use-cases but whether it would be enough to warrant a company mass-producing a device remains to be seen. 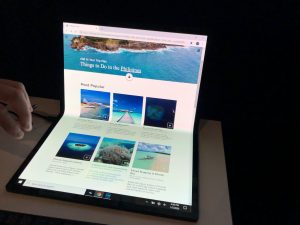 For those curious about specs, the Intel Horseshoe Bend has an OLED display which is 17.3-inches, to be precise. This concept was running a new Intel Tiger Lake chip and all the internals are fitted into a 7mm body. The Horseshoe Bend was running regular ol’ Windows 10 when we saw it – rather than Microsoft’s foldable-focused Windows 10X which is on the horizon.

10nm Tiger Lake architecture, which is set to ship in laptops later this year. It allows for a 7mm-thick chassis with a 9W TDP and without any active cooling. The device we saw was running regular Windows 10, but Intel expects Microsoft’s upcoming Windows 10X to be a good fit for the category later on.